Publication
Toronto Telegram (Toronto, ON), 6 May 1939

TWELVE scattered houses, homes of thirty people, form Port Britain to-day. In 1857 the village's three hundred and fifty or five hundred inhabitants included Robert Bickle, who made wagons and had a blacksmith shop; Manley Mark, another blacksmith; two coopers, William Dinner and Thomas Crocker, with shops a hundred yards apart, on the road to the harbor; John Dearke and John Kinsman, who were builders, and James Reeves, the stonemason; Thomas Jarvis and Charles Lee, contractors; William Glen, who kept a store and operated the flour, chop and sawmill; Charles Lilly, the Grand Trunk stationmaster, with a house down by the station; Joseph Morrell, proprietor of the harbor; Thomas Myers, who kept a general store and the post office, which had one mail a day; Charles D. Potts, the public school teacher; Hiram Soper, descendant of the first settler, veterinary surgeon in the township; James Spry, who kept the hotel built by William Marsh, with its driving shed, blacksmith shop and ball room; the Staples brothers, who were fishermen, working from the port; Foster Stephenson, who found enough business to establish himself as an upholsterer in those days of horsehair sofas; Richard Trenbeth, the tailor, who took a flyer in a quarter acre lot for £40; and the two Marshes, Robert B. Marsh, J.P., farmer, and William S. Marsh, "Bill the Shantyman," lumber merchant and shipbuilder. The Bible Christians had a church on the east side of the millpond, and the mill was on the west side of the pond, a little further south. There was a cheesebox factory on the northern outskirts.

There is neither church nor cheesebox in the hamlet now, nor even a Marsh, though that was the name that made the place. Some of the other old families are still represented. Harold Reeve is a grandson of the man who built the Marsh vault. Walker Sculthorpe is a great grandson of the pioneer Samuel Marsh. Edgar Eley lives in the house Robert Marsh built. Mrs. Rock, Harry Schwartz, James Snell, Nathan Nicholls, Cyril Dearke, Mrs. Dinner, Charles Leighton, Ernest Ramsey, Staples and Sylvister are other dwellers.

William Marsh was a man not only of great physical energy, but of enterprise and vision. He acquired, by purchase, inheritance, or direct grant from the Crown, three thousand acres between the shore of the lake and the new Kingston road which had been cut two miles farther inland and that much north of Port Britain whose fortunes we have been following. Where others saw in these forests of beech, maple, oak and pine just so many more trees to be cut before the soil could be sown, William saw wealth for generations. He is said to have ought one farm for a forty-gallon barrel of whiskey. Whiskey was then worth five shillings a gallon, or $1 in "Halifax currency." At any rate Lieut. Samuel Marsh's careful account books show all sales at that price. The pioneer Marsh dealt in whiskey as one of the commodities of life, a by-product of his pioneer mill. But the family was notably temperate and many of the second and third generations in Canada were total abstainers.

His younger brother, Robert, reeve and justice of the peace in the 1850's, built the stone house in Port Britain, with the autographed windows already mentioned, on the lot next the old family homestead, Samuel Marsh's second house, now marked by the lilac clumps. But William's fine old brick mansion, distinguished for the glazing and panel-work of its broad front door, stands yet on the north side of the Kingston road, two miles west of the village of Welcome, where you turn south for Port Hope.

William developed his three-thousand-acre estate in the grand manner. He brought out skilled artisans, workmen and settlers from England. He built a brick school for their children (it stood on the south side of the Kingston road), and supplied the teachers for it. He gave each of his sons three hundred acres of land when they married, and built them brick houses, still standing on the south side of the Kingston road a mile or more north of the old lake shore road cut by Capt. Danforth, on which Port Britain was built. Like the paternal residence, their furnishings included pianos made in Hope Township by Mr. Marsh's experts brought from England. William Marsh introduced the art of building in brick instead of timber and frame and stone, and brought in the brick makers and brick builders necessary for the purpose.

It is not clear whether the village of Port Britain as a municipality was the work of William Marsh or of his brother, Robert. The latter created a sensation by selling village lots at the unprecedented price of £40 for a quarter acre, $160 a lot, which does not seem so remarkable now, but Richard Trenbeth, the Cornishman who paid this price, was considered an optimist. He was a tailor and gardener, and probably one of the craftsmen introduced by William Marsh into the new community. When farms sold at 75 cents or a dollar an acre this would, of course, be a boom price. The cutting up of Port Britain into village lots may have been part of the land boom attempted by English and Montreal capitalists in the wake of the Grand Trunk enterprise. Montreal men did get some two hundred acres south of the old Danforth road, controlling the site for the railway station which they knew would be built, the site for the harbor they expected to develop from the pond or basin at the mouth of Marsh's Creek, and the land for a radius of a quarter of a mile. These philanthropists included Sir Samuel Morton, William Jackson, Thomas Brassey and Edward Ladd Betts, according to old deeds of 1855. The Port Britain Harbor Co., of 1856 may have been their subsidiary. The promoters named for it were Joseph Morrell, proprietor or manager, A. D. DeGrassi, secretary and treasurer pro tem, and Messrs. Kelsey and Beachell.

An auction was held for the town lots into which the farms had been hacked, but the buyers were few. From existing records it does not appear that the Marsh family originated land speculation or profited greatly by it. Their contribution to the development of Hope Township was more substantial. They built mills, stores, houses, schools and ships, they cleared the forests and marketed the timber, they grew grain and sold it.

All of their enterprises were not successful. William lost heavily in one of his timber ventures. A great raft which had been formed of timber floated down the streams pouring into Lake Ontario got under way for Quebec, and came to grief in the Lachine Rapids. Either the steering sweep or one of the oars leapt out of the hands of Walker Sculthorpe's father—-Walker is seventy-one and living in Port Britain-—and knocked two men overboard. They were drowned in the rapids and the raft, out of control, was wrecked. It was worth a fortune, and that fortune was scattered along a hundred miles of shore line and never recovered.

Against this, he may have profited by the disaster which befell another raft of 30 or 40,000 feet of timber which washed up on the beach at Port Britain from the westward. Frenchmen from Quebec were brought to refloat it, and reassemble it, with Marsh's Creek as a base, and the salvaging of it may have put a pretty penny into "Bill, the Shantyman's," pocket. Such a raft was worth from $15,000 to $25,000 landed at Quebec. White pine was worth fivepence, red pine eightpence, and white oak tenpence the cubic foot delivered to the ocean-going ships there. 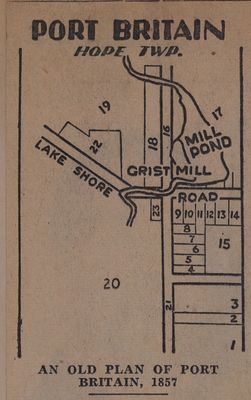