"LET'er Be," "Chicora," or "Warrenco." Name her as you will. She was a blockade runner in her time, and according to the findings of an international court, "Her owners and her complement of officers and men did willfully, feloniously and with malice aforethought enter into and execute conspiracies against the peace and dignity of the Government of the United States of America."

There is no record available, internationally or otherwise, to prove that the Government of the United States was reimbursed by the Government of Great Britain for the affront by Let'er Be-Chicora-Warrenco to American peace and dignity. But there is and for many years has been a firm belief that such is the case and that to reimburse itself in some measure, the British Government seized and appropriated to its own uses the side-wheel steamer, Letter B, before she changed her name to Chicora and before she presented herself on the Great Lakes, in 1878.

"Let 'er Be" was built for speed and endurance and defiance of the United States naval blockade of Confederate States seaports. She was built by Lairds, of Birkenhead, of tough, Low moor iron and engined by the same firm with the best propulsive equipment then known to mechanical engineers.

She started life with a turtleback foredeck, provided so that nobody need hesitate to slam her into boarding seas or showers of Yankee round-shot during the big moments of her blockade activities. No man how living can be found who may say with truth that he ever saw that turtleback, so it is taken for granted that she got rid of it sometime before she arrived at Toronto and went into service for the Niagara Navigation Company.

Previous to that she had carried Lord Wolseley and his retinue on the lakewise leg of an expedition to an indefinite part of Canada that was , then known as "The Northwest" and maybe at that time the British Government did account her as one of its many possessions.

Toronto knew her as Chicora, queen of the Niagara fleet; rival of Southern Belle, sister of Cibola an excursion boat without equal. Few indeed are the Torontonians who know or did know her when she dismantled, stripped of her engines, her paddles, her ornate upper works and all her fripperies; when she became a lowly bulk cargo barge and was renamed Warrenco.

Probably fewer still know that in her day of power and glory she was equipped with the one and only set of oscillating engines that ever propelled any vessel on the Great Lakes or that after fifty years of hard and exacting service those old Laird engines were as good and in every way as serviceable as they were on the day that they were first turned over.

An oscillating engine is a decidedly old fashioned rig. It has no crossheads or guides and its pistons apply power direct to the cranks of a thwartships paddle shaft. Its cylinders and steam chests oscillate or "rock" on trunions. Its power is applied from below the shaft and its valve gear is of so complicated a character that it requires three engineers to answer the belled demands of "full ahead," "half," "slow, "stop," "reverse," "slow astern" and "full astern."

Norman Griffin was Chicora's last chief engineer. He has a cushier and better paid berth with the Conger-Lehigh Coal Company, now; but his true loves are marine engines and the idol of his heart is that sturdy, infallible old oscillating job in the Chicora. There was work in the engine room. Norman had two good lads with him as second and third and the three of them worked together in a team play that was perfect.

Docking the vessel, the chief sat in a "pulpit," and handled six levers; two throttles, two levers for hooking in of valves and two water levers for the condenser. The second and third engineers worked reverse gear wheels and quadrants.

Griffin learned his trade in Midland shops, and in his spare time taught himself the skilled and backbreaking work of firing, the mucky work of oiling and the grief of the water-tender's art. He has held chief's berths in all kinds of engine rooms, on triple expansion jobs, turbines, compounds and low pressure. None of them is as dear to his heart as the old Chicora's rockers.

Next to that berth, in Norman's esteem was his chief's job in the Corona. And there again is something to remember about marine engines. Plenty of people knew the Corona, which was built for Niagara Navigation Company by the Bertram Shipyard and Engine Works at Toronto, to replace the fire destroyed Cibola. Not many people except some marine engineers know that Cibola's engines which were put into Corona, were the biggest and most powerful incline compounds on the Great Lakes and one of the biggest of their kind in all the world.

They were made by Rankin and Blackmore at Greenock, on the Clyde; designed by Archie Rankin when he was 21 years old. The low pressure valve of that set weighed one ton and 20 pounds. The high pressure valve weighed 960 pounds. The low pressure cylinder was plenty big enough for a tall man to stand upright within its walls and to have head room to spare. Its diameter was 84 inches. The high pressure cylinder was 45 inches across and the stroke of the piston was 66 inches.

Now as wheels turned and water ran and time went on its way, Archie Rankin left Greenock and moved into a better mechanical engineer's berth in a machine and engine works at Cleveland, Ohio. He knew all about his engines having been transferred from burned Cibola to up-and-coming Corona, and when the opportunity offered he travelled up from Buffalo to Lewiston and bought a ticket to Toronto.

He waited around for the Corona's trip and as soon as the vessel docked at Lewiston, he went aboard and straightway made for the engine room. There were his big compounds, as good and just as shiny and clean as they were when he pronounced them fit. Then he had a look at the at the builders' plates.

Behold you. His original plate was there where it ought to be and the script stood out bold and true.

"Built by Rankin and Blackmore, Greenock."

But sacrilege had been committed in rankest form. There was another plate, inscribed -

As soon as he contacted the Bertram officials at Toronto, he said a lot. "You rebuilt my engines, did you?" he charged them scornfully. "You say you did. But dammit, you didn't. You couldn't. They never needed rebuilding. They never will. You picked them up out of Cibola and set them down in Corona, and that was all you did. They were fit to run right as you found them, in I spite of havn' been through a fire and afterwards sunk. I doubt if you so much as re-babbited a bearing. Have ye a fitter in your works that could any more than take them down and set 'em up again on original plans? Show him to me and I'll pay him a thousand quid. I'll not ask him could he rebuild something that needs no rebuilding.

"Now, take that plate off and keep it no less than a mile away from my engine. You've made yourself ridiculous."

It was not feasible to take the plate off and destroy it; so the offending word "re-built" was obliterated by having a brass quadrant placed over it.

The "LETTER B" in a southern port during the Civil War.

The CHICORA as most Torontonians remember her.

NORMAN GRIFFIN, engine expert when he reigned in the Chicora. 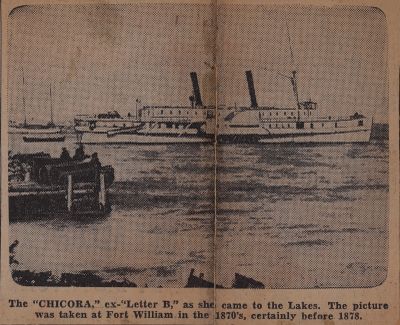 Letter B in Civil War

CHICORA as most Torontonians remember her