Search (Advanced) → What's New → Details
Last Call of the NORSEMAN and the Life-Log of the CAROLINE MARSH: Schooner Days CCCXCIX (399)

"THAT," writes Mrs. W. W. Webster from Little Britain, near Lindsay—-not to be confused with our Port Britain near Port Hope, but connected with it—-"That was a fine picture you had in The Telegram of the old vault where my great-grandfather lies at Port Britain. I feel like giving you a word of praise on the write-up, but I cannot give the date of the building. It was old when I first remember it, I suppose about 1875, but the grounds and shrubs were kept up nicely when I was child.

"My father must have owned the old homestead shortly after the old windows were autographed (1853-6), as he was married about 1866 ind he lived there before that. In my earliest recollections the village was no bigger than it is now (ten houses). I think the old pioneer Samuel Marsh and his son Robert had more to do with Port Britain in its flourishing days than William, the older son, who probably married young and went to live on the highway. I would imagine Jane Ostrom, Samuel's pioneer bride from Prince Edward County, would have some say about it, too. I have a nice white quilt she spun and wove on the old place from flax, I guess.

"My grandmother often told me what a very enterprising man her father Samuel was, and how much he accomplished in his short life, ended by fever and ague during the war of 1812. I think if William was his most enterprising son my father, Robert Elias Sculthorpe, was by all means his most outstanding grandson, and he saw to it that the old Marsh homestead did not go out of the family.

"He was certainly the big man of the village when I was a child, and when he was killed at the age of 46 he was a man of very considerable means. My grandmother often likened him to her father, the old pioneer, in his enterprising spirit.

"He came to his death in 1882 while he and his employees were loading pens from his elevator into the schooner Norseman. By half past seven they had almost completed that task. Employees of Councillor King's elevator nearby, notified him that they were going to run some cars to the King elevator and asked him to move the platform crossing the track to the Norseman. He did so, but noticing a heavy piece of iron lying across the rail sprang to pull it aside. The shunting cars were upon him. He stood up close to the building and the first got past without crushing him, but he was big and burly of form and something on the second car caught his left shoulder, turned him around and rolled him as a man rolls a cigarette. He was living when picked up, called for his brother, and dictated his will before he would permit any medical attention. He died four hours later, his last words being to his eldest son, a lad of fourteen: "Walter, be a good boy."

"He then owned three good farms, the Sculthorpe elevator, a block in Port Hope opposite the Guide office, the house where his mother lived and a house in Cavan street and more property. He used neither liquor nor tobacco, and his word was as good as his bond.

"Samuel Marsh the pioneer, seems to have left each of his ten children 200 acres or more. My grandmother's was on the 2nd concession and the two sisters straight west of the homestead, and Eveyln across the road from Emily's, William on the third concession and Ruliff on the fourth concession. Robert's was the homestead. That is all I can place unless the two other Marsh places on the highway belonged to two other sisters and William bought them out."

The schooner Norseman, into which Mr. Sculthorpe was loading grain, came to a tragic end herself in the following spring. She loaded grain at several ports at the west end of the lake and was working down to complete her cargo when she was passed by the schooner Brothers, Capt. Joseph Williams, in the evening. Next morning she was seen off Port Credit, running back before a strong east breeze. Five miles off the lighthouse she suddenly disappeared. Her wreckage with the bodies of her crew entangled in it was washed up all the way from Oakville to Hamilton. She was a converted propeller and owned in Hamilton.

Before leaving Port Britain for a while hearken to another memory of the schooner Caroline Marsh which for good or ill was the cause of commencing this long drawn series of reminiscences of the little old shipping place three miles west of Port Hope and sixty miles east of Toronto. No one would recognize it as a shipping place today and few could find it without a guide, so small is its cluster of remaining houses and so far is it from the highway.

A dear old lady whose name is unknown but whose age is eighty has written to Schooner Days about the Caroline Marsh. Her letter clears up the confusion about two vessels of this name and sheds some light on the tradition of a serious wreck of the American coast in which the Caroline Marsh was concerned. Our unknown benefactress writes:

"There were no two schooners called the Caroline Marsh. I know all those people you speak of in the paper. I lived in Port Hope since I was a baby until the 1882. In the year 1864 (this would be twelve years after the Caroline Marsh was built at Port Britain) one of my brothers cooked on her. The captain then was old Captain Millar. Mr. Vinden was the owner then. In 1872 another brother of mine was one of the sailors in her when she was badly damaged by stranding. She was caught in a storm and blown on Jinase Island."

This is how our correspondent spells the name, probably phonetically from memories of seven-seven years ago. There is no such island charted on Lake Ontario and the spot may be the mouth of the Genesee River near Rochester. Seventy years ago this was always spoken of as "the Genesee." Sailors ignored the little villages of Charlotte or Summerville at the river's mouth if they were then in existence just as they ignored today except locally. The place is officially known as the Port of Rochester. There is no island there but eighty years ago Irondequoit Bay to the east of the Genesee river was open and the Caroline Marsh may have been drawn into that large area and struck an island. The Marsh family all agree that she was wrecked once somewhere on the American shore and again at Oswego. Our correspondent continues:

"They got no tidings for three weeks. We all thought my brother was lost and all on board. The schooner was refloated but had to go on the drydock for repairs. She might have been changed then in her length and breadth, which would account for different figures in the registers.

"At that time I was acquainted with the Blachard family. They lived in a cottage on a street in Port Hope called the Base Line. I think they have changed the name of that street now. In 1881 Mrs. Blachard lived next door to my brother on the Base Line. That was the year the Caroline Marsh was sold to Capt. R. Henning and George Strong. He measured lumber for Mr. Vinden. They bought schooners in shares."

The lady, who only gives her initials, "Mrs. M.H.," said she might send her address later. It is hoped that she will do so. With her assistance we have this little dossier of the life of the Caroline Marsh, one of the fleet of a thousand sail which once ranged the five Great Lakes.

1853—Carried a cargo of staves from Whitby to Quebec, Captain Manson, master. 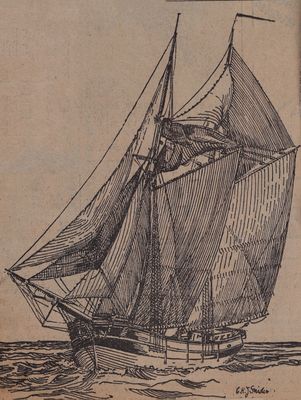