Schooner Days was a small world compared with the present one. An oak-apple and the universe are alike huge to their occupants, be they ants or angels.

The little cosmos of the Great Lakes, with a mixed fleet of a thousand sail traversing them, was as complicated and subdivided as the world itself.

All sorts and conditions of men, like ship, like sailor. The haughty "three-'n'-after," with towering topsails and perhaps a raffee or square sails in addition, white-painted quarterdeck, and hull crowding the canal locks to their utmost capacity, seemed to sneer through her crimson eyed hawsepipes at the bunty little hookers with holes even in the patches of their worn sails and hammered-out tin cans holding the oakum into their leaky seams.

The barefoot boy in his father's cut-down pants with the seat out of them, to whom the little hooker was home and livelihood, looked with awe and envy on the sunburned men in blue derry smocks and overalls who filled the forecastles of even the small "real vessels" of Lake Ontario. And these, in turn, tried to conceal the respect they actually the "old salties" who came up from the ocean with proper outfits of oilskins and sou'westers and sea-boots, and a vast contempt for the frog-ponds as they called our inland seas--until they had frozen or drowned or been rescued, in a fall gale or a summer squall. They soon changed their minds.

Lower lake sailors were seldom fancy dressers and affected contempt for the whiskered fellows in mackinaw coats from Up Above and snorted at them for lumberjacks or Scandyhoovians, because many of them were Finns and Swedes. But they had to admire the way they kept their vessels. And there were rough, tough, shabbily dressed tobacco-chewing captains in all the schooners who prided themselves on their ignorance and prophesied darkly of what would become of "so much white shirtsleeves on the top of the house" when a smart young fellow would be seen going ashore decently dressed in blue serge or even black broadcloth with a gold watch chain in his waistcoat, to report to the owners. Some of the older schooner skippers would even don a frock coat and silk hat for Sundays, if in harbor. Hence that quaint collection of "stovepipes" in various ports known as the harbormaster's hat, presented formally each year and worn no longer than the Crown of St. Edward at the coronation of a British monarch. The actual hat, given for arriving first in a season, is a smart fedora or the price of one in a cheque signed by the harbormaster.

At the bottom of Schooner Day society were the little hookers, sometimes even without decks, which picked up farm produce, scrap iron, stone, wood, gravel of sand along the shores and ferried such freight to the nearest market, maybe only a few miles away. Such was the Merrimac, a semi-open boat with an outboard rudder, which could just float five cords of hardwood. She was afterwards lengthened and re-rigged as a tiny schooner with two topmasts, and named the Zebra. Even so she was the smallest of the stonehooker fleet, with the exception of the pretty little Minnie of St. Catharines, which had been a fruit carrier. She, too, was schooner rigged but never aspired to topmasts. Another wee one was the scow sloop Bob-o-link, whose avocation was carrying a few sheep to pasture as far as the Galloos and other islands at the foot of the lake; or the Dreadnaught of Brighton, clinkerbuilt like a rowboat, which carried baby beef from Calf Pasture Point at Presqu'isle to Ox Point down the Bay of Quinte, and once made a harum-scarum voyage to Rochester with a waggonload of cedar posts; or the little tarred-over box called the Blackbird, which gathered up junk around Toronto and had Oak Hall's clothing store ad for a mainsail.

Next in rank were hookers like the Rover, which 50 tons weight would sink and in which Johnny Williams started as cook, at the age of nine; or the Brothers from which he had graduated, at the stage in his lake-life which we are describing. These hookers plied a similar trade, but with larger cargoes. Sometimes they were scows, sometimes carvel-built schooners. In the Bay of Quinte they were often sloops, with a big rig on their single mast, and wide shoal hulls shaped like half of a puncheon laid on its side. They gathered up grain from all the Bay ports, and got it to Kingston, for shipment to Montreal in river barges. They carried from a thousand bushels upwards.

Many of these small craft were "family boats." A good sailor, especially one with skill in ship carpentry, might get one together during the winter and start sailing alone with his wife, or with a pummy, as the man or boy would be called—-some waterfront waif or deck-walloper who could not command an ordinary seaman's wages. His first seasons might be confined to the cordwood trade, which was the simplest of all. Babies might be born aboard and grow up in the little hooker. The family might live in her all the year round. As the boys became big enough to help pile cordwood or steer a course the sailor would get rid of the pummy and make longer or more frequent voyages, or get a larger vessel.

Mark Blowers, of Port Credit, built six houses from the earnings of his little scow Reindeer, which he sailed year after year with his growing sons. He had no wages to pay out. Mark's family lived ashore, but as the boys got out of knee pants he took a new one each season to sail with him. The son who had already been trained went sailing for wages with someone else, or took over a hooker of his own.

A grade above the small "family boats," and of greater carrying capacity, were the scows and schooners of around a hundred tons, winch followed the pick-up coasting trade when they could not get more ambitious work, but strove for their share of what might be called "through traffic." For example, the Palmateers of Point Traverse, would send their green-hulled scow Flying Scud all the way up Lake Erie for a grain cargo for Kingston, if they could get it. These vessels were sometimes sailed by a family, but on a wage basis for all hands, and they usually had a forecastle for the one or two men before the mast. All crews, family or otherwise, ate at a common table in the cabin at the other end of the vessel, where the captain, mate, and cook were housed. Such craft as these were the Brothers in which Johnny Williams had sailed four years with Joe and Tommy, or the Jenny Jones, in which he was wrecked when Ned Hanlan rowed to the rescue.

Next in the schooner day economy were the full-rigged fore-and-aft schooners, topsail schooners, brigantines, barquentines, and a few real brigs or other square riggers-—employed regularly in the freight trades—-grain, lumber, timber, salt, and coal—-ranging all over the lakes for cargoes, and sometimes going foreign, even as far as India, Russia, or Africa, or California.

Most of the lake vessels which went abroad were very much larger than the hookers, being of "Old Canal size" and upwards. Yet, some of the earliest lake schooners to "go across" were of quite modest dimensions. The Sea Gull of Oakville, which went from Toronto to Natal with lumber and brought back sugar and ivory to Boston, the year Johnny commenced sailing, was only 106 feet long, and could not carry more than 400 tons of freight.

She was a pigmy compared to the giants of "Up Above," (that is, the Upper Lakes) which, when Johnny Williams was a boy, couldn’t squeeze seaward through the locks of the Welland Canal or the Erie Canal.

Up above, where the big fellows paid 25 cents a day more wages because they were so heavily rigged--schooners had two, three, four, or even five masts—-and hung on to their canvas till it blew out because it was so hard to reef and to set again—-that was the young Ontario sailor’s Promised Land, his heaven, his Valhalla, his land-of-hope-and-glory. That was where they handled the red iron ore, and the big lumber cargoes that were building the wooden metropolises—-is that the plural?—-of the Golden West, Chicago, which had had its Great Fire, in which four Canadian schooners were burned, was where they loaded grain till the cabin floor was covered with it, and they never touched a halliard to take in sail till they rounded to under Buffalo breakwater.

Johnny had seen big American "barques" boiling down Lake Ontario on their last lap to the head of the St. Lawrence. They were big to him, but he was told that these were the smaller ones of the fleet from above, because they were just able to pass the Welland Canal locks. The raw wood of their sides, where the oak plank had to be dubbed with adzes to squeeze them through, told the story of the tight fit.

Far off hills are green, and Johnny yearned to take his part in the high society of schooner days, in the pulsing throbbing life of the Upper Lakes, where copper and silver and agates and amethysts were dug from Ontario the rocks, and where men wore peak caps and mackinaw shirts and red underwear and whiskers like mattresses.

But he cannily remembered that it is well to learn to walk before you try to run, and he shipped in the forecastle in a 500-ton Lake Ontario three-master, whose more ambitious voyage was occasionally as far as Toledo on Lake Erie.

"THE HAUGHTY THREE-'N' AFTER WITH TOWERING TOPSAILS AND PERHAPS A RAFFEE OR SQUARE SAILS IN ADDITION" - the Lake Ontario schooner whose duplicate little Johnny Williams eventually owned.

"UP ABOVE WHERE THE BIG FELLOWS HAD EVEN FIVE MASTS" - The DAVID DOWS of Toledo, 265 feet Iong, 1,418 tons register, 3,000 tons carrying capacity. Painted by Loudon G. Wilson.

"JOHNNY HAD SEEN BIG AMERICAN 'BARQUES' BOILING DOWN Lake Ontario -- the JOHN B. MERRILL From Chicago"

"HOOKERS LIKE THE ROVER, WHICH 50 TONS WOULD SINK" -- THE GOOD NEWS of Toronto, from a photograph by Mr. Montye Macrae 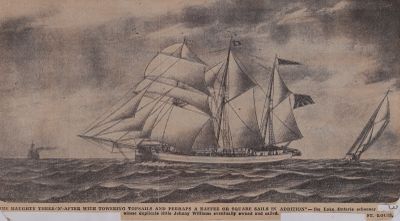