HIS complexion is ruddy, as a sailor's ought to be, and it is clear and youthful. His eyes, though merry and twinkling, give you the impression of gazing at the far horizons of the Pacific. His hair, now white as snow, is thick and plentiful. And he's as straight as a soldier. That's Richard Tucker, eighty years old, and for many of his later years, "anchored" as he says, in Toronto. But it was in a Toronto hospital that we met this one-time rover of the Seven Seas. Dick Tucker is having a course of treatments for an infirmity from which a host of friends wish him a full and speedy recovery. Visitors, however, find him almost anywhere but in bed. He prefers making short voyages in the corridors under his own steam—or rather, sail. As a matter of fact, Dick Tucker's first adventure at sea was in a ship that used steam a bit sceptically, and sailed with a sort of "I told you so" assurance. She was the Angola, under Captain Thompson, and her home port was Liverpool, the Lancashire city where Tucker was born in 1860. Impressed by the grace and dignity of this 650-ton vessel, Dick forgot the little detail of parental consent, and signed up as cabin boy. When a fellow's fourteen, he has to make important decisions, sometimes, himself.

There was a general cargo in the Angola when she sailed for the west coast of Africa—cloth, hardware, some liquids dear to the hearts of men of all races; trinkets, guns and gunpowder. For these things the natives at Sierra Leone and other places were glad to exchange palm oil and precious metals. Young Tucker went into the barter business on his own. Parrots were his specialty and three biscuits per parrot seemed fair enough to both parties. Other members of the crew acquired monkeys at equally reasonable rates. One of these creatures, with a passion for apple dumplings, developed an annoying habit of stealing them from the tray Dick Tucker carried to the mess. And it really was the monkey who stole the dumplings. At the mouth of the Bonny river on this trip, Dick was introduced to the renowned King Coffee, in whom Queen Victoria found delight. This native ruler was attired in shining Wellington boots, scarlet coat with medals and epaulettes, and a white top hat—all bought in London. A gallant sword was at his side, and, in waving farewell to the Angola, he stood in a canoe long enough to hold his fifteen paddlers true. After ten months of high adventure, Tucker and his parrots were back in Liverpool.

It was in the barque Coldstream that this Toronto veteran next sailed. She was an old East India-man, slow and cumbersome in habit. But for more than two years Dick Tucker was aboard, sailing from London to Bombay and other ports of India. Chartered by an Indian rajah, the Coldstream made a trading trip up the Euphrates, returning to Bombay with a cargo of sugar—much of it ruined by water shipped during a hurricane. On the long trip back to London, food ran short, and at St. Helena, where beef, dried and pressed, was put aboard, the beef was found to have been pressed so hard that sailors were able to carve snuff boxes and tiny animals out of it.

In the clipper Meropi, Tucker next voyaged. She carried a general cargo from London to Melbourne, and coal from New Zealand to Hong Kong. But when the Meropi left Hong Kong for home, laden with tea, Dick was not aboard. He was at the settlement undergoing repairs after an accident. A happy accident, it proved. For when Tucker sailed for London, the proudest days of his sailing career were his. He climbed the rigging and helped set the sails on that clipper of immortal fame, the Cutty-Sark. That joy and pride has never departed. With an affection that only a true sailor may know, he recalls her almost incredible speed, her grace and beauty as she skimmed over the sea with a rakish slant. And he dreams still of the Cutty-Sark's flapping, ghostly sails in the moonlight. For all who sailed in that queen of the clipper fleet loved her, and, like Tam O' Shanter, we're ready to shout, "Weel done, Cutty-Sark!"

In 1882, Richard Tinker was a member of the crew of the troop ship Holland, which carried the 1st and 2nd Life Guards to the Egyptian campaign when Alexandria was bombarded, and when at Tel-el Kebir the forces of Arabi Pasha were crushed.

The Cutty Sark, named after Tam O'Shanter's favorite in the dance of witches, was built at Dumbarton on the Clyde in 1867 by Hercules Linton. She was one of Britain's racing clippers bringing tea from China under sail, and made some record passages in that trade in the 1870's. It was in the wool and grain trade from Australia later that she proved herself the fastest sailing vessel afloat. In 1885 she went from London to Sydney in 67 days and came back in 75, with the season's wool clip. A hundred days for this passage under sail is good.

She reached a maximum speed of 17 1/2, which is 20 statute miles an hour, certainly "steamboat time." She averaged 15 1/2 knots through 24 hours, and on another occasion sailed away from the P. and O. steamer Britannia, doing 15 knots.

Under all plain sail she had 27 pieces of canvas set, and she had 20 more "fancy sails" for light winds. She was small for a deep-water ship, 212 feet long and 690 tons displacement. Some of our lake schooners were over 200 feet long and such were of greater carrying capacity than the Cutty Sark. She was cut very fine.

In the decline of the sailing ship era this fine vessel became a Portuguese tramp, but she was rescued by Capt. Dowman in 1922, at a cost of $20,000, and restored, to her pristine glory. She served as a training ship for boys, being kept on exhibition at Falmouth, or sent around the British coast. There are no sailors left to sail her as she had been sailed, with flying kites, moonrakers, Jimmy Greens, studdingsails and jib-o-jibs.

On Capt. Dowman's death she was moved to Greenhithe on the Thames, to become a sistership to the old Worcester, which has trained thousands of British boys in the rudiments of sail. Two more unlike ships could not be found, the Worcester being a survivor of the old fat wooden walls, with a dummy rig twice too small for her, but big enough to teach the boys what masts, yards, ratlines and ropes were. The Cutty Sark, of a third or a quarter of her tonnage, spired above her like a poplar topping a haystack.

From R. R. Parsons, United Cigar Store, 948 St. Clair avenue west, come some good clippings about the Cutty Sark, inspired by a Telegram picture of a model of her. Mr. Parsons' grandfather, Capt. Richard Woodget, who died recently, was master of the Cutty Sark in her prime—-1885-1895—-when she made the record of 353 nautical miles in one day and 3,467 in eleven days, a continuous average of 15 statute miles per hour.

Capt. Woodget never hove the Cutty Sark to no matter how hard it blew. He always finished what he started. He could quote the Bible by the chapter. Once when it was blowing great guns and Capt. Woodget was crowding Sark to get her through the edge of a hurricane he called all hands to the quarterdeck for an extempore prayer. In the middle of it a sea struck her and filled her to the waist rail.

She rolled down so far the sea filled the belly of the reefed main-topsail.

"That dam' mast'll be over the side in a jiffy," yelled a seaman.

"Stop your dam' row till I finish praying," roared Capt. Woodget "Amen!!! Port watch, man halliards downhauls and clewlines! Up aloft the starboard watch, and goose wing that topsail and get the water out of it!" 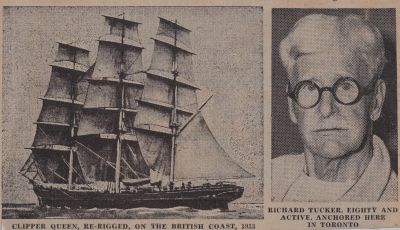