"OLD CHARLIE" Robertson, as everybody called Charles A. Robertson, head of the firm of Charles Robertson and Co., shipowners in Toronto in the 'eighties, kept his mouth shut and his eyes open.

Also his ears. Nothing went on along the waterfront that he did not note; and one of the things which came to his knowledge late in 1882 was that young Johnny Williams, chartering a laid-up stonehooker at a dollar a day, had made six cargoes with her in the month before the bay froze, and netted $168 for himself and his brother.

Mr. Robertson placed that fact against a couple of less palatable ones; that he had spent $2,100 on rebuilding the J. J. Pugsley of Port Dover and changing her square scow nose to a round spoon bow, and had had three captains in her in two seasons, and none of them could either make her sail or make her pay. The Pugsley had been brought down from Lake Erie by John Goldring, and had been considered a great catch. But she had not proved so to Mr. Robertson.

Even his partners, Medlar and Arnot, with the shipyard at the foot of Berkeley street, didn't see much in her, after she had been rebuilt, except a lot of work which wasn't paying for itself.

If that Williams lad could make money out of a stonehooker someone else had laid up, he ought to be able to break even in a larger vessel, opined "Old Charlie." And so Johnny Williams got his chance.

Somewhere in the process of transfer from Lake Erie to Lake Ontario, or in the rebuilding here, the Pugsley had been rechristened. She was now known as the P. E. Young of Port Dover on the registry books, and along the waterfront as the Paddy Young. The Paddy Young she remained for the remaining 16 years of her hardworking life, until, her tarred sides whitewashed over to make her look like a United States battleship of the time, she went up in a blaze of rockets and gunpowder, representing the recently defunct U.S.S. Maine. This fell deed was done for the edification of the grandstand crowds and whoever else could get a toehold on the waterfront, at the Canadian National Exhibition in 1898.

In the spring of 1883, when young Johnny Williams assumed command of her, the P. E. Young was a respectable trader of the smaller class; definitely a cut above the stonehookers.

She was in good shape physically if still somewhat dubious in parentage, for in rebuilding her with a schoonerish bow and bilges they had left her original square stern and chine quarters. She looked a little like an old galleon. Her quarter deck was raised high, with correspondingly high bulwarks, and it had a high cabin trunk on it. She was really cocked-up more aft than the flattering picture by Charlie Gibbons, fireman of the tug Frank Jackman, shows. Her tail eventually drooped more than enough to compensate for the original elevation.

The Paddy Young, as an outsider, got little of the Bay of Quinte grain trade, for these were the days before the Murray Canal gave access to the westerners of Lake Ontario; but Johnny pushed her briskly into such risky ports as Wellington and Weller's Bay, on the western lake face of Prince Edward, where the anchorage was perilous, and went wherever there was a dollar to be earned, whatever the cargo was.

In one of these efforts at cutting into the trade which the larger schooners regarded as their monopoly—-that is, across the lake to Oswego, Johnny had an encounter which soon had important results. In the morning mist off Salmon Point he made out the loom of a large fore-and-after—-large, that is compared with the Paddy, capable of carrying four times her load. This was the Speedwell of Picton, recently acquired by Capt. James Ewart, Sr., of Cobourg, owner of a fleet of schooners sailed by him and his sons. She rode high out of the water, for she was empty of cargo. The old captain himself sat in state on the quarterdeck and looked down at the modest master of the laden P. E. Young as she crossed his wake.

"I suppose, boy, you wouldn't call the Prince of Wales your uncle, with a little scow like that under you?" rumbled the great man.

"She's good enough for me until I get something better," said Johnny. "At any rate she's paying her way."

"That's more than the Speedwell is doing at this minute," growled the old man, with a thought of his empty hold.

Within five years Johnny had sailed one of Capt. Ewart's vessels for him, and made her pay, and had bought this very Speedwell and was making money out of her.

It took unceasing hard work and hard thinking to keep the P. E. Young to windward of red ink in her owner's books; she was slow except running free, and she could not carry more than 125 tons dead weight, or 4,000 bushels of grain.

But, as said already, Johnny took her wherever there was a paying cargo to be picked up. To Port Burwell, on Lake Erie, to load 16-foot ash logs for axe-handles for the factory in St. Catharines; to Trenton, tucked away in the northwest end of the Bay of Quinte, to load lumber for N. and D. J. Phillips in the Garden City.

The freight was only $75, and that did not quite cover the wages and provisions. But when the lumber was at last piled out in the Phillips yard, and Johnny received his money, Mr. Phillips said: "What am I to do about this? The contractor at Grimsby Beach is hollering for delivery of hundreds of doors and window frames and sashes for the cottages he is building. If he doesn't get the cottages closed up and weather tight before the season's up he'll be ruined. The railway can't get them to him. A vessel can only lie at Grimsby in smooth water, so I'm afraid to trust the lake."

"You can't unload if it does. Tell you what I'll do. I'll put on a gang to load you here, and unload you there, and get a tug to tow you up."

"We're on our way," said Johnny. 'Get the stuff aboard of us, and send up teams to haul, it from the beach, and the contractors will have the glass in by to-morrow night if they do their part."

The yard loaded the Paddy in a few hours. The men brought a clothes basket filled with bread and cheese and butter and bacon and coffee and "fixings" aboard, and a little tug yanked her down to Port Dalhousie and up to Grimsby Beach that same night. By morning every frame, door, shutter and sash was delivered, and Johnny had another freight of $75 to put beside the one Which had taken three weeks to earn; twenty-one days for $75; twenty-two days for $150.

When he sailed back to Toronto he walked into Medlar and Arnot's office and handed a package over to Old Charlie.

It was twelve hundred dollars.

"Have you robbed a bank?" asked his employer.

"Season's earnings—-nett-—with all bills paid and the Paddy Young in better shape than you turned her over to me."

"Young man," said Mr. Robinson, "I want you to take a job for the winter that I have for you. It will keep you going, and I want you to study for your master's certificate. The P. E. Young isn't so big that she has to have a certified captain, but there are other vessels that do, and Captain John Williams would look mighty good aboard one of them."

Johnny came out treading on air. Perhaps Mr. Robertson meant the Mary Everett. The Mary Everett was only a scow, it was true, a big green scow, built down Belleville way. There was talk of Mr. Robertson or Medler and Arnot rebuilding her into a three-masted schooner. She was twice the size of the Paddy Young, or bigger. That would be a step, to get command of her!

But what came to Johnny Williams was not the Mary Everett, but a big gold watch. He wears it yet, sixty years later, and it keeps excellent time. Inscribed on the back of it is:

THE P. E. YOUNG OF PORT DOVER, from a drawing by Charles I. Gibbons, who did hundreds of such portraits for masters and mates in the nineteenth century. 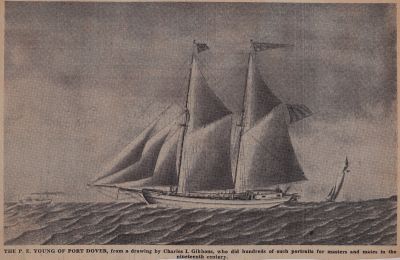