He was working in Charles Robertson and Co.'s employment then, for Mr. Robertson had promised him a shore job through the winter so that he could write for his master's certificate. Christmas Eve came. All the married men were given big turkeys, then selling at ten cents a pound in St. Lawrence Market. All the single men were given a dollar, which was a day's wages. There was no turkey and no dollar for Johnny, but he didn't expect either. He was only a sailor—captain, it was true, of Mr. Robertson's little schooner, P. E. Young, and he had made her pay, too—-but very grateful for temporary employment during the laid-up season, which enabled him to stay home and brush up for his "papers." Besides, he was receiving 15 cents an hour as foreman of the piledriving crew, while the men were only getting 12 1/2 cents.

The P. E. Young, by the way, was never the J. J. Pugsley. Both these vessels were built at Port Dover on Lake Erie, and both were rebuilt by Medlar and Arnot of Toronto. But the Pugsley was rebuilt by Medlar and Arnot's men, under Capt. James Andrew, at Oakville and was renamed the Helen. The P. E. Young was rebuilt in Toronto by Medlar and Arnot, and never changed her name. She was called after Patrick Emerson Young, a worthy scion of Lake Erie's shores. Young Johnny Williams, going into her after three captains had left her "in the hole" had rejoiced the heart of her owner, Mr. Robertson, with $1,200 net earnings for the season, the first dividend she had paid in years.

The bookkeeper told Johnny at quitting time this Christmas Eve of 1883 that Mr. Robertson—-Old Charlie to everybody, almost—-would like him to call at his house that evening. So call at the house he did.

He thought it might be, something about the piledriving. But Mr. Robertson shyly held out a little square packet and said, "Captain, here is a Christmas present for you. Open it when you get home."

"Thank you, Mr. Robertson," said Johnny, with genuine appreciation, and as much enthusiasm as he could muster, "A Merry Christmas to you, sir."

To tell the truth he was a little-—not disappointed, for he expected nothing-—but unenthusiastic, for Old Charlie was deeply religious, and the packet was just the size of a prayerbook. Johnny liked the Bible, but the prayer book was associated with church parades of the old 100th Regiment of Foot, whereof his father was an ex-color sergeant, and it did not interest Johnny very much at this time.

And when he got home and opened the package there was the great gold watch, a Waltham, in its shining gold case, with his name on it, and Old Charlie's Christmas greeting.

The young sailor was caught aback. It was not the price of the watch, $90, in the jeweler's catalogue, nor the fact that it was a watch, for he already had one, a good one, though it was only silver.

He had bought it for $15 from one of the Curphy brothers, when they were in Toledo, in the Clara Youell, two years before. That was the year they laid her up there for the winter, and he lived in her as shipkeeper, and became mate at $55 a month eventually.

They were coming back to the vessel when they saw men running aboard and trying to overhaul the anchor burtons, which had been left rove when the schooner was laid up. They were landsmen and making a poor fist of it.

"A team of horses has gone through the ice!" they yelled.

"We'll give you all the rope you need," promised Johnny, "but those burtons are no good to you unrove. Where are the horses?" The team had run away and plunged into the Maumee river ahead of where the Youell was lying. They were entangled in their harness and the whiffle-trees and double-trees, which had been detached from the wagon, and were kicking themselves to death as they struggled to get footing on the ice.

The two sailors made a swift job of rescue. One jumped aboard the thrashing horses and cut their breast straps and hames straps. This let the harness fall from them. The other threw running bowlines over their heads, and told the crowd to tally on.

"You'll choke them to death!" yelled one man, and it did look like it, for the horses bloated up as the improvised halters tightened around their straining necks.

But the more they bloated the higher they floated, and the pull of the ropes helped them get their hooves on to the ice and out they came, snorting and gasping, but none the worse. Even dripping and disheveled with the river water freezing on their rumpled coats, it was plain to be seen that they were magnificent beasts, fit for any horse show.

By the time the horses had been led away the waterfront police were on the job.

"Any loss to report?" inquired a constable solicitously.

"Well, yes," said Johnny hesitantly. "I've lost my watch. It was in my breast pocket with its chain and fell out as I stooped over to get the horses on to the ice."

"Take this to the station and they'll let you have the dragging irons," said the cop, tearing a page from his notebook.

Johnny went and returned with the long poles and grappling hooks used for dragging for the drowned.

Another crowd gathered. "Who's dead?" they asked. "When did he fall in? Where did you see him? How long ago?"

Johnny fished deliberately. There was a little scratching sound, but nothing came up. It felt as though the hooks had scraped the chain. Carefully he dipped again, and there was a click. Up came the pole with the watch on the tines. He wiped the case clean and hurried to the Youell's cabin. He opened it up and plunged it into a can of coal oil to check the rusting. Next morning he carried it to a jeweller's, and asked him to clean it.

"Why, it's been in coal oil," said the jeweler.

So Johnny told how it got there.

It so happened that the jeweler had another customer, and he was the head of the firm that owned the horses. The jeweler told him the story, and he sought Johnny out, and thanked him for what he had done.

"What did you lose doing this?" he asked.

"Just my watch, and I got it back. It's being cleaned now."

"I know," said the man. "That's how I heard about you. What will it cost to have it cleaned?"

"I don't know; about two dollars and a half, the jeweler thought."

"Well," said the owner, "that team is a prize team. I wouldn't take a thousand dollars for them. You take this, and have the watch put into A1 shape. And as you're good at grappling, see what you can do with the hooks again, for the whiffle-trees and double trees and the harness must be down there yet if the river current hasn't carried them away."

"ALL THE NICE GIRLS LOVE A SAILOR"

CAPT. WILLIAMS, his grand-daughter NANCY LEE, and MR, CHICO, on the porch of 57 Islesworth avenue this morning. Chico is somewhat of a two-timer, being a valiant watchman by night and by day ambitious of acting as a substitute for the leg Capt. Williams lost two years ago. In his 84th year the master manner retains his keen eye for a pretty girl—as the song says, "You know what sailors are." 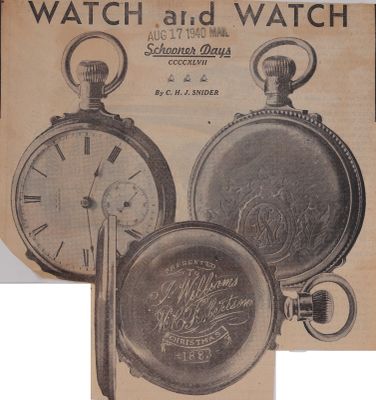