(Interrupting the career of Capt. John Williams, Master Mariner, to tell the triumph of a Toronto tug captain going strong in his seventies.)

WITH no more screaming of sirens and crashing of artillery than accompanies the landing of a T.T.C. ferry, Capt. W. J. Stitt, of Toronto, "Bill" to generations of mariners, seventy years old and still in service--not very still, as you shall see—-has just completed a wartime voyage worthy of ringing the historic Lutine bell at Lloyds.

"Kingston to Kingston" might be the title of the trip. The two Kingstons are parted by thousands of miles of water, salt and fresh. But Kingston to Kingston is only poetic license, for while reached his destination, Kingston, Ontario, with his convoy in good order, his departure was not exactly from Kingston, Jamaica, but from Port Antonio in the same island.

Capt. Stitt went to Jamaica last May, arriving on the 12th, in the United Fruit Company's liner Chiriqui, of the Great White Fleet-—"a wonderful ship, wonderful service, wonderful weather," was all his postcard told Schooner Days about the trip down. There was a letter later, full of enthusiasm about the fruit and cocoanuts and Blue Mountain trails of Jamaica, but precious little about the big venture, except that "We expect to get away from here on June 1st, for Kingston, Ont." Evidently they did, for in Kingston, Ont., they are. Capt. Stitt had a schedule, mentioned as casually as a ferry's timetable. He carried it out to the letter and figure—-except that he was in Kingston, Ont., five days ahead of time, in spite of bad weather, barnacles, poor coal and sick firemen, or vice versa. Firemen fell sick and had to be replaced, and the mate got hurt by one of the hawsers and had to have medical attention when they got to Nova Scotia.

Capt. Stitt was sent down by the Canadian Dredge and Dock Co., Limited, to get half a million dollars' worth of marine property up to Lake Ontario, through the perils of German raiders, submarines, mines and planes, plus West Indian hurricanes and the general run of bad weather on the Atlantic Ocean and the Gulf of St. Lawrence.

His flotilla consisted of a large steel dredge, appropriately named the Monarch; two steel dump scows with doors in their bottoms, and two tugs. The one Capt Stitt was in was the Frank Dixon, a fine steel tug built in England, a grand seaboat, 90 feet long, powered like a battleship. The heaviest duty of towing, however, fell upon the American tug Relief, one of the largest in the United States, a splendid vessel for deep-sea towing.

They got away from Port Antonio, Jamaica, on the last day of May. The Relief led the van, with 1,500 feet of towing wire out on the dredge Monarch. From the Monarch a 1,000-foot hawser ran to the first steel scow,, and from that another 1,000 feet of line ran to the next steel scow. This made a procession three-quarters of a mile long, and for the the journey the tug Dixon was used as a patrol boat, keeping the tow lighted up at night, scouting for approaching vessels, and warning them (if friendly) that the adjoining mile of Atlantic was rather occupied with strings of wire, chain, hemp, and steel structures, moving only at a walking pace.

That's right. It took eleven days to get from Miami to New York, 1,100 miles; a hundred miles a day, four miles, an hour. A terrible target for a bomber or a sub. Pie for a raider. But neither bomber, sub or raider did the ranging Dixon sight. The tow was heavy with barnacles, from long lying in salt water, and at times almost immoveable. Seventy-five nautical miles in twenty-four hours was often the best that could be done. They had heavy chain and wire bridles and 700-foot hawsers between the tows.

"I enjoyed every minute of it, and I would not mind going back over it to-morrow," Capt. Stitt confessed. "But I must say we struck some of the worst weather I ever sailed in. Some members of the crew were sick to add to our troubles. Heavy seas threatened to sink the dredge and scows, and the tow, one mile long, was always in danger of being fouled by other ships at night.

"We saw porpoises, whales and fish every description on the trip. American warships were standing guard all along the American coast but they did not bother us.

"On the 11th day out of Jamaica I had to signal the Relief that the scows would sink in the rough seas. We had to put into Miami, unhook the tow in rough water and get the scows on drydock. Between Miami and Jamaica the scows were continually leaking and they had to be pumped out. It took six days to fix up the scows."

"They were tight when they left, for their bottoms were heavily encrusted with harbor barnacles. This made them the very devil to tow. In the open sea nature's caulking no longer protected them and the dump-doors banged about and they leaked at the door hinges and in rivets and boltheads. It was often too rough for me to get the Dixon alongside with her syphon pump. We kept them afloat by running the Relief's motorboat alongside when we could, and using her gasoline pump to gain on the water.

After getting the scows into good shape the tow started north again, and dragged them up to New York. They towed much better after being relieved of their barnacles and they stayed tight, with the doors shored up against banging. Here they were turned over to the tug Moran, which got them into the Erie barge canal, and so up to Oswego, where the Kingston tug Rival took them over and towed them "home" across Lake Ontario, to the Canadian Dredge and Drydock Company's drydock. Meantime the Relief, Monarch and Dixon proceeded towards Nova Scotia, on the long way around the Maritimes into the Gulf of St. Lawrence, for the Monarch was too big for the Erie canal route to Lake Ontario.

They left New York June 30th and got soundings off the coast of Nova Scotia at 3 o'clock in the morning of July 4th, in a dense fog. The Relief, being American, could not enter the war zone, even on Independence Day, so she had to turn back for New York. Her 2,000-mile part of the voyage was over. Capt. Stitt had still 1,500 miles to go. The tug Dixon, with the big Monarch in tow, made for Yarmouth, picking the way through a narrow, dangerous channel against a heavy southeast wind which made navigation difficult. The Dixon could handle the big-dredge all right, but left her to anchor outside, when they got as far as Halifax, for it is a long tow up the harbor. The tug went in for supplies and medical attention for sick sailors. Leaving Halifax July 11th the tug and dredge next made Pictou, N.S. Then around the corner to Gaspe and Quebec. Then the battle against the current up to Montreal-—and the canals and river to Kingston.

Capt. Stitt is a well known contributor to Schooner Days, and while he has not sailed schooners he knows a lot about them, for he has towed many of them as barges, or rescued them when stranded. He is an authority on marine history, and should have a book for us to read, one of these days.

His two brothers, Captain George and Captain Jim, specialized in canal work when alive and Captain Bill has been on every government canal project from the Lachine to the Welland, handling tugs and contractors' plant.

He has towed everything from the Spanish caravels of 1893 to the schooner James G. Blaine, whose mainmast was so high they had to douse the topmast to get her under the high level bridge in Chicago. This Jamaica trip should be a cap-sheaf, but he makes nothing of it.

HERE IS CAPT. STITT with his long tow astern of him and FLUFFY on his port quarter. Until a motor car put an end put an end to Fluffy and a happy friendship the little dog was his inseparable companion. Capt. Stitt has "always had a dog" since he started sailing half a century ago. His home is at 138 Evelyn crescent, Toronto. 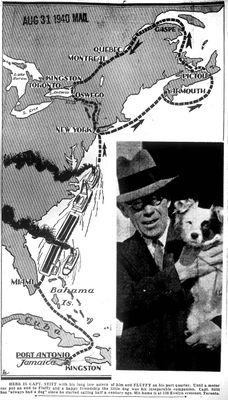