BE pleased to listen to what is known about a command which, fortunately for him, Capt. Williams did not obtain.

It is curious that the few lake sailors still alive Who remember the Mary Everett usually speak of her by that name, while her registered title, Sarepta, is almost forgotten. It does linger in the vicinity of Port Hope, home of Capt. James Peacock, now in his eighties, who had his own name on her ensign when he sailed her sixty years ago. One of his few mishaps in his long sailing career was when the new Sarepta went ashore under him at Fairhaven. She lost her foresheet post in a jibe, when trying to enter the harbor, and became unmanageable.

The vessel was built in Belleville in 1867, or at least was so registered. This may mean that she was built by David Tait at that place, or at his own shipyard on the "Isle of Tante," twenty miles away in the Bay of Quinte, which is known to our generation as Amherst Island. John and David Tait between them built very many of the schooners hailing from the Bay.

Mary Everett was a sister or cousin of William Marsh of Port Britain, who had the famous Marsh fleet of schooners, and possibly this vessel was included in it at one time. She was a two-masted craft, scow-built, that is, square at both ends, up to as late as 1879. Some time after that she was very much altered, in name, hull and rig.

In breaking up the home of the late Peter and Mrs. Arnot, Mr. Charles M. Arnot, of 94 Huntley street, came upon some relics which he forwarded to this compiler, with his best wishes for Schooner Days. Among them was an account book entitled "Scow MARY EVERETT, Charles Robertson & Co., 102 Esplanade street, with a later title, in pencil, "Schr. SAREPTA, Chas. Robertson & Co."

The entries are while the vessel was still named the Everett, and show that Charles E. Caldwell, W. a day for Fraser as mate. These figures are for late in November. Earlier, sailors were getting $1.50 a day. James Mutart was captain in 1879, wages unspecified.

The schooner's crew was normally the captain, mate, two sailors and the cook, usually a woman. In the fall a man was shipped so as to strengthen the complement. The Mary Everett was not a large vessel. She had apparently earned $2,497 in freights to Sept. 4th, 1880, and had paid out $2,392 in expenses, leaving a balance of $105. A new foresail, costing $165, more than disposed of that.

The best freight reported was $239 on a load of lumber from Port Hope to Oswego. She was principally engaged in carrying lumber from Toronto and Port Hope to Oswego, with some cargoes of coal back. Once she got three days lightering of the schooner Guelph, bringing in $54. But there were a couple of "commissions," apparently to that schooner's captain. The books are not very clear, but at the end of the season, Dec. 6th, 1880, "Cash received from schooner, $665.75" is shown. There is also this curious inventory, which tells what a 300-ton schooner had for living purposes.

This with all cabin furniture, listed so as to permit checking when outfitting time came around in the spring.

The only reference to the new name Sarepta, apart from the title page, is a small slip which may have come from a later season:

Anyway, the Everett did become the Sarepta, called after "the widow woman in the Bible." The one who had the cruse of oil. Perhaps the name was chosen by one of the partners owning her. Mr. Charles Robertson, whose mind, as Capt. Williams recalled when he thought he was getting prayerbook from him for Christmas, ran to religious subjects.

The transformation was made at Oakville, and was extensive. The schooner, which had always been painted green before, came out white; her two masts had become three. Her blunt scow bow had been rebuilt into a conventional straight-stem; her square scow stern had been carried out on the usual lines of a moulded schooner's stern. Judging from the picture rescued from a shed at Port Hope, she looked like a regular three-'n'-after in everything but tonnage, and Capt. Peacock was justifiably proud of her.

At one stage in her pilgrimage the Mary Everett or Sarepta was manned by a genial crew of darkies, refugee slaves or their children, who had formed a little colony near Bronte. She was then towed by the Steambarge Niagara, of the Mathews line, commanded by the fightingest captain the Sixteen Mile Creek ever produced, Morgan by name. The sons of Ham saw no good reason for over exerting themselves when the steambarge was doing the work anyway, and sometimes they did not even trouble to stand a watch or steer their vessel. At the end of one middle watch, 4 a.m., and the sun peeping over the rim of the lake, Capt. Morgan looked back from the Niagara's wheelhouse and beheld his tow zig-zagging aimlessly in his wake.

"Blow for those blackbirds to cast off and make sail!" he yelled to his lookout. "They've got a fair wind and can sail as fast as we can tow them if they put the muslin on her."

Three blasts from the Niagara's whistle produced no effect. Capt. Morgan got his binoculars focussed.

"Why there's nobody on deck, not even at the wheel!" he shouted.

"Them 'coons has been in the straw all night," said the Niagara's lookout enviously.

"I'll get 'em out," said Capt. Morgan, racing to his cabin. He emerged with a shotgun, loaded in both barrels.

At the third "Bang!" a frizzy head emerged from the schooner's cabin, followed by a tangle of black arms and legs. One negro in his shirt-tail ran forward and cast off the towline as the salvo ceased. Capt. Morgan repeated the "Make canvas" signal and the darkies got the duds on her faster than they clothed themselves. After that there was a good lookout kept on the Mary Everett and towing signals were answered almost before the whistle caught its breath.

TRANSFORMED INTO THE SAREPTA, SMART-LOOKING THBEE-'N'-AFTER 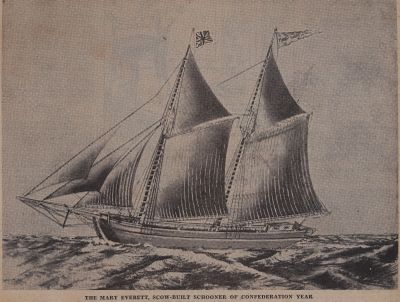