THE GREENWOOD made a good run down to Charlotte with lumber, unloaded it, and hauled to the trestle to load coal. Her unloading had detained her so that she was late finishing up, and six tons had to go on deck. It was late at night when she hauled ahead, ready to sail for home; too late for the customs man to be found to clear her. So she lay over that night, as other vessels did, waiting to see what the morning would bring in the way of weather, for it was late in the fall and no time to take chances.

Sunday morning came, and it looked promising, and all the rest of the fleet sailed out. But no customs man appeared. Capt. Johnny Williams made two impatient trips to his office, and then stuck a note in the door stating the urgency of his case, but no results followed. Then he telegraphed the head office of customs in Rochester, nine miles inland, asking where the Charlotte customs officer could be found. "In church at this time," was the prompt answer, followed by another from the man himself, saying that he was very sorry, but the Greenwood's papers had all been made out for her the night before, and no further documents were required, so—

The Greenwood started up the lake at noon on Sunday, half a day late.

This was bad enough at any time, but in the fall, with the chances of completing a passage dependent upon each favorable hour, even on each favorable minute, the delay was serious. It was blowing a good breeze from the southward, and by cracking on with everything he had Johnny caught up with the tailenders of the fleet somewhere off the Thirty, which, as all lake sailors know, is Thirty Mile Point light, so named from its distance from Niagara, one of the oldest established lights on the lake.

Here, as it so often does, the wind hauled around to the southwest and west, and it blew great guns. The Greenwood's gafftopsails were no great shakes at this time, and they went to ribbons as he tried to crowd her for home before it got so bad that she would have to run back. The jibtopsail, matching the gaff topsails in age and strength—-or weakness—-followed them to the ragbag. Then the chain whip of the standing jib sheet parted, and to save the sail they downhauled if till a jury sheet could be rigged. This done, in the dark, with seas making a breach over the vessel, they hoisted the sail again, but while it was going up the weather sheet flailed about so that the sail was split and useless, although it was one of the best in the ship.

To compensate for the lack of head canvas — the forestaysail was now all that was left forward of the foremast—-the mainsheet had to be eased somewhat, and the Greenwood went horsing across the lake, under water most of the time. The six tons of coal had vanished from the deck long before. So, too, went the big new towline, to Capt. Williams' great grief, and the gearbox abaft the mainmast. The crew would have gone too, when this particular sea swept her, only they were close to the mainmast itself, at the task of settling the sail down, and its bulk broke the force ot the boarding billow.

Some of the Greenwood's stanchions were soft, and some of her bulwarks planking was not so good. "But she was all vessel," Capt. Williams hastens to interject fifty-two years after this episode. "She was light but strong. Go below in her forecastle in the heaviest sea and you would hear no grumbling and complaining of the timbers."

The battering lake soon found the weak spots in the upperworks and with a rending crash tore out plank after plank. This was, temporarily, no misfortune, for she was taking water on deck faster than the scuppers could carry it off or the little swingports could free her, and the breaches in the bulwarks allowed tons of water to escape before swamping the struggling schooner.

It was a wild night in the lake. All the vessels ahead of the Greenwood turned tail to it and fled. They caught a glimpse of the big St. Louis, of twice the Greenwood's tonnage, going across her stern in the dark. She never stopped running till she got, to Kingston, and the cargo of coal she had for Toronto was two weeks late.

The Greenwood had a cabin built across aft from rail to rail, in the style of the old-fashioned "round-house," or poop deck. Every sea that boarded her swept aft to the forward bulkhead of the cabin and shot into the air like a breaker bursting on a cliff. The arrangement made a little fort of the quarterdeck, from which the schooner could be steered and navigated, but it had the disadvantage that, the cabin entrance being from the forward end, the cabin itself was blockaded in heavy weather.

Hanging in the weather rigging, peering for a last glimpse of the Niagara light, Capt. Williams saw the cabin door open cautiously, and the figure of his wife, in her oilskin coat and heavy weather gear, emerge. Then he saw a sea sweep across and throw Mrs. Williams back into the cabin, slamming the door behind her. In that twinkling he noticed she had in her hand a little packet. He could guess what it contained.

He clambered down the ratlines, watched his chance, jerked the door open quickly and as quickly closed it behind him.

His wife was steadying herself by the cabin table, bolted to the deck. The water was still streaming from her oilskins, mingling with the water from his own and deepening the little pools that chased one another across the floor, where the sea that slammed the door shut had spilled in. He struck a match, breaking the head purposely; struck again, and lighted his pipe with elaborate nonchalance.

"It's a pity," said he with a cheerful grin, "people wouldn't close the doors after them to keep the floor dry when there's water flying about."

"Will it make much difference in a little while where the water flies about?" asked she quietly, with a brave smile.

"Of course not, girlie," answered her husband promptly. "I was looking for Niagara light just now, but its out of sight astern, so we're well across the lake, and we'll be picking up the lights of Toronto soon. Turn in now, and get some sleep, for we may be in early in the morning."

When they got the mainsail settled and the water off her deck, the Greenwood came back nearer to an even keel and made better weather of it. She had been almost on her beam-ends before she lost her deckload of coal and gear and water. Capt. Williams flogged her across the lake all night. Early in the morning he picked up the land. Sb was going in for "the Kew" as the called it, Kew Beach, the very spot where he was born.

"Six miles to leeward of Toronto Point," said the mate, shaking the spray from his eyebrows. "Let's give her sheet, captain, and run her down the lake. No vessel living can make those six miles to weather in this sea!"

"No!" said Capt. Williams. "See all clear with your anchors, and stand by to let go if we have to when we come around. I may have to give her the hooks to hold what we've got, but I'm not going to lose anything we've gained."

Breathlessly they watched when closer in with the Beach the wheel was whirled "Hard-a-lee!" and the gallant Greenwood, rearing, plunging, ducking, diving, sprang up into the wind and came around on the offshore tack like a little yacht All the weak spots in her sails and bulwarks had been found. What was left was good as the wheat. Out into the lake again she fought her way, fathom by fathom, tacking at the end of each mile, so as not to get too far off shore to anchor on the sand. The Woodbine slipped past astern, Ashbridge's Bay, Fisherman's Island, Simcoe Park, the Eastern Gap, the long weary stretch of the south shore of the Island, and at last Gibraltar Point was abeam. They could hear the clang of the old bell-buoy—which is more than we can do now, for it is out, this year, after a half-century of interrupted service.

Its faithful clatter was music to the toiling schooner. Once she had passed it her close-strapped sheets were eased and she went boiling down the western sandbar, which was then unable to raise its head through the lather of breakers. And so to the five stake-buoys which used to mark the curving channel to the Western Gap and the Queen's Wharf. Here she squared away for the run down the harbor.

"D'ye mean to tell me you worked up in that breeze of wind?" roared Capt. Jim Haddon, the 400-lb. Port Hope Baby, in Andy Tymon's bar, when Capt. Williams looked in after reporting to the customs.

"There's the vessel at the foot of the street," said Capt. Williams.

"Well, there ain't another on this lake could even try it," declared the Infant. "Andy, the best in the house for Johnny Williams, whether he'll take it or not!" He smote the bar top with such a crash from his hamlike fist that the glasses jumped to the chandelier and the bottles bounced to the brass rail and were smashed.

"I'll take a cigar, thank you, captain," said Johnny, "and I'm sorry to be the cause of your spoiling your drink. Have another on me."

"Say," said Capt. Thompson, sailing the Trade Wind, "I've got a chance to go to Toledo to bring down a new steamer they've bought in Toronto. There should be $300 in it for me. Will you take the Trade Wind down to Charlotte and bring her back for me? I'll make it worth your while."

Johnny recollected the time in the summer when he had poked the Greenwood's horn through the Trade Wind's foresail. He had offered to make good the slight damage at once and had the canvas, sailtwine, palms and needles all ready to do it. But the master of the Trade Wind declined. And afterwards sent him a stiff sailmaker's bill, which he promptly paid.

He was going to get the price of that lost hawser back; and the torn sails; and the burst bulwarks as well.

THE W. T. GREENWOOD OF COBOURG, SAILED FOR THREE SEASONS BY CAPT. WILLIAMS 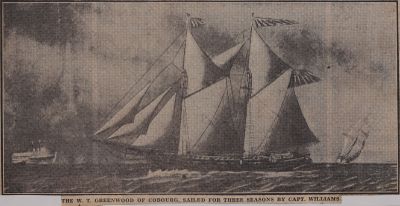