THE ESPLANADE, which gave a name to the great fire recalled last week, has itself been so far forgotten that few Toronto people know of it as anything other than an awkward network of railway tracks which used to cut off access to the waterfront until the existing viaduct and subways were built.

Smoke, noise, shunting freight trains, tramps, bums and burst watermelons stinking in the sun, these are the compiler's memories of the Esplanade fifty years ago; with added entries to include faded Martin and Maggie with their broken down push-cart, never quite full of coal, and faded signs at the corners where north-and-south streets intersected the wooden sidewalks and dusty roadway on the north side — "ESPLANADE ST. EAST" was the legend from Berkeley street to Yonge. ESPLANADE ST. WEST was the inscription, when you could decipher it, west of Yonge street.

The name signs were fewer and fewer as one plodded west dodging freight cars and railway constables, and detouring around railway yards, but one long persisted bravely amid the shadowy lumber piles farther west than the foot of Brock street. Blessings on it, for it discomfited a Grand Trunk "detective" who tried to frustrate boyish historic research by threatening arrest for trespass; trespass on what was still a public street.

But the Esplanade was not always a headache and hideousness. Even the writer can remember a tree on it. True, it was only a dying locust, and a few wisps of grass, where the old Morgue claimed the city's unknown dead and provided beer money for a select few coroner's jurymen. And the Esplanade was once a lovely green possibility, laid out by the happy hope of early town planners, for a sort of boulevard, or parade and driveway, along the shore of the crystal-clear Bay, before the fine old homes and mellow brick public buildings which the clean water mirrored from the height of the escarpment along which Front street rambled. Thirty acres were set apart as a Mall (which is pronounced to rhyme with Al Capone's first name) in 1818. Its eastern terminus was the Fair Green.

That was the dream of those who projected the city. It was never completely fulfilled, for progress saw in the level space easy access for the steam railway, and the shovel forthwith began to gouge away the shore below Front street, and line after line of steel rails obliterated the bridle path and carriage drive and park and parade that were or might have been.

The chief building destroyed in this fire was the sugar refinery at the foot of Princess street, then the highest building in Toronto—it was seven or eight stories high—and an outstanding evidence of "modern" industry. Messrs A. T. Fulton, John Leys, Geo. Gooderham, W. H. Beatty had established a plant for the refinement of grapesugar and the manufacture of glucose, which will may be explained, is less sweet than cane sugar. Glucose is a trade name for a syrup used in making other syrups and certain beers. Glucose can be produced from starch and a great many other things than ripe grapes, and the sugar refinery provided a market for Ontario's grain as well as the fruits of the Niagara peninsula, so that the destruction of the refinery was a severe industrial blow.

The sugar refinery was completely destroyed. Its night watchman perished. Two names are given for him in the hasty contemporary accounts. One "Rooney, a hero of Balaclava," and the other "Henry Wort, a pensioner of the 44th Regiment, who had seen service in China and Russia." Obscure obituary for one who might have ridden in the charge of the Light Brigade. And nothing was left of the proud building but the gaunt skeleton of its tall chimney. From the refinery the fire swept west on the wings of a three-day gale, and wiped out the oldest part of the Toronto waterfront, the harborage which had been developed around the ancient settlement when the Parliament Buildings were at the foot of Parliament street, and merchants and fishermen landed their wares at little wharves on the eastern foreshore of the bay.

This area was, in, 1885, covered with boathouses where pleasure craft were built and stored, and with the wharves of vessel owners and merchants, like Elias Rogers, even then doing a large business in coal; Sylvester Brothers' elevator and yard, Adamson's elevator, Crane's coal warehouse, Hamilton's wharf, Park's Vinegar Works, Beard's Wharf, where the mayor of Toronto had done business, and so on.

Ferries then plied from the foot of Church street, and even farther east on the waterfront from the foot of Parliament street. And although the moorings of the Toronto and Royal Canadian Yacht Club were then in the vicinity of the old Union Station at the foot of Simcoe street, many yachts moored in the eastern part of the bay, especially small ones which patronized the boathouses. But large yachts like the Aileen and Oriole had moorings there, too, convenient to the fine old residences of their owners near Trinity street. These big yachts were away on a cruise at the time of the blaze as was told last week; but many row boats, sailboats, small yachts and ferries were victims of the fire.

At Church street wharf were the steamers Mazeppa and Ontario. The Ontario had steam up and tried to tow the Mazeppa out, but a schooner blocked the way and the vessels were doomed. The ferries Annie Craig and Theresa were also destroyed. These steamers were valued at $25,000. In Polson's shipyard and engine works, and Saulter's, Evans', Heakes', Bovey's, Brosliam's, Gunnell's and Rennardson's boathouses, hundreds of rowboats and some yachts, steam and sail, were burned. The yachts destroyed were the Minden, Veronica, Fiight, and a large new yacht that had hot yet been named.

A schooner scow named the Mary Ann was caught at the foot of George street. Her crew, some of the Goldrings, got sail on her to drive her clear, but flaming shingles set fire to the foresail as they hoisted it, and wrapped the ship in a fiery sheet. The crew escaped with their shifts on fire and the vessel drifted till the fire burned out. The Mary Ann was rebuilt, and they tried to give her a new name, but the government was fussy, and wouldn't allow it, so Mary Ann she remained until broken up at Whitby, ten years later.

A larger schooner-scow, the Maple Leaf, almost new, was also burned so badly she had to be rebuilt. Her name remained, but she had her face lifted so completely her original builder wouldn't know her. She went into the fire bluntnosed, square sterned, and flat bottomed. She came back from Bronte, where the Dorland Brothers rebuilt her high sheered, clipper-bowed, schooner sterned and round-bilged.

The Maple Leaf was a good-looking vessel for twenty years after that, until her ends began to droop. Two of the Goldring brothers sailed her, out of Whitby. They had a fleet, the Maple Leaf, Northwest, and Rapid City, and the Helen, largest of the lot. Their father sailed her, sometimes single-handed. It was so that he lost her on a rock below Oshawa.

Then there was the schooner Madeline, of about the same size as these. She, too, was lying at the foot of George street the night of the fire. She was so badly burned she had to be rebuilt. And there was the little schooner Zebra, which had already been rebuilt from an open boat, with an outboard rudder. Cinders burned holes in her decks and bulwarks, and charred her spars. The two who were in her abandoned her and went back to work on the C.P.R. construction job they had left when lured by her charms.

The Zebra was again rebuilt in Port Credit. Her original name was the Merrimac. She and the Minnie of St. Catharines were a pair of cute little hookers, no bigger than a steamer's lifeboats, the one bald-headed, without topsails, and the other with twelve-foot topmasts sprouting from her short mastheads. "Teeter" Mitchell, who sailed the Minnie, was always going to put topmasts into her, but never got around to it. She was blown up to represent the U.S.S. Maine in 1898; or rather, she was painted to represent the Maine, and blown up by gunpowder at the Exhibition. To "blow her up" to battleship size, as cameramen do in these days, was beyond the scope of the photographers of the gay nineties. The pair of pygmies were less than thirty feet long. The Zebra was wrecked at Victoria Park in 1897.

That any of the waterfront escaped was due to the wind turning south before the fire crossed Yonge street, and dying away, followed by rain. The Toronto fire brigade then only numbered seventy-five men. They put up a splendid fight with what equipment they had. All they were long on was water. There were millions of gallons of that in the Bay.

AS REBUILT AFTER THE ESPLANADE FIRE

The MAPLE LEAF The MADELINE 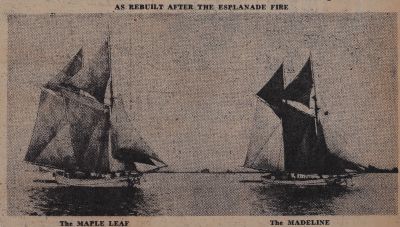