VERY first schooner this compiler set eyes on was the Speedwell of Picton.

Grandfather Rankin took the country child on a visit to the big city, to the waterfront. First there was the amazing miracle of the blue of the lake, seen for the first time. To the eyes of the country boy the first glimpse of it across the foot of Peter street, where grandfather lived, was a happy recall of the bush, blue in the distance, which ringed the home horizon in Kleinberg. He couldn't believe that this was water.

Having once seen Lake Ontario's heavenly hue afar the dirt of the harbor close by did not disappoint. It was a lesson good for life. The water alongside may be rough and grim—but it is blue farther out.

And there amid the dust and grime of the Waterworks slip at the foot of John street lay the Speedwell, fresh in from Oswego with coal for the pumping engines. She was shining from the paint brush of her new skipper and owner. Bright white paint above, bright red paint below, with her cabin in contrasting panels, and her rail and covering-board picked out in green. Her name was in yellow letters on her quarter.

Her young visitor was too green in shiplore to know whether the Speedwell was lean or full, tubby or clipper, but he was much impressed by her tall masts, taller than the highest pine he knew, and the details of her rigging. Less by the shrouds and ratlines, which formed the "ladders" every child looked for in a ship picture, than by the size and arrangement of the peak halliards, leading through three wooden pulleys called blocks on each gaff, and by the lazy-jacks (unknown nomenclature then) which spread in wide fan shapes from the topping lifts to the booms, to gather up the great billowing sails as they were lowered.

Captain Williams, the hero of this installment of Schooner Days, was asleep in that cabin, so the compiler did not see him at this time. How strange that we should have been so close together then, and completely unconscious of each other's existence; and that we should have lunch together at the Shellbacks Club this week, and that one should be now recording the other's activities of fifty years before!

CAPTAIN JOHN WILLIAMS, up-and-coming vesselman, graduated from the W. T. Greenwood to the Speedwell of Picton in 1888.

He owned half of the Speedwell, and Capt. Alex. Ure owned the other half. Financially they went loyally fifty-fifty. Afloat there was no question who was in command.

Capt. Ure agreed, and never regretted the partnership. Capt. Williams said this week: "He was a good partner, and my only fault with him was that he did too much, more than his share." Capt. Ure died a few years ago.

The partnership was not a lengthy one, perhaps because of its prosperity. Together they made enough to get the Speedwell paid for and to buy and rebuild a second schooner, the W. Y. Emery. Then they broke up, with good will on both sides, Capt. Williams keeping the Speedwell and Capt. Ure taking the other vessel. He was a good ship-carpenter, and was in his element rebuilding or rerigging some craft like the Emery, Antelope, Augusta, or Reuben Doud, all of which he commanded in turn; and he thriftily employed his building talents ashore in the winter time, and so was able to retire eventually, the owner of many well-built revenue-producing houses in Toronto.

The Speedwell was an ugly brute, and nobody on the waterfront but Capt. Williams had a good word for her. Even he admits that she would fall off as much as three points from her course when running free, and few men ever learned how to steer her. Three points is an angle of thirty-four degrees, almost the tenth part of a complete circle; and we all know what would happen a car if it weaved around that much in traffic. "Yes, I generally carried four men," said Capt. Williams, "for at the end of his two hour trick one man would be pretty well worn out steering her if she had the wind over the quarter."

"But the Blanchard boys could steer her," Capt. Williams generously insisted. "I've seen Babe or Buz or George catch her with the wheel and hold her so that the mainsail jibed as easily as turning over a leaf in a book, the boom first and then the gaff, without the least jar.

"But you did have to do queer things with her. I mind once we were making canvas after a squall, getting the mainsail on her, heavy and soaked with rain. It had been sheeted aft for reefing and was held amidships by the crotch tackles; what ought to be the very hardest trim to steer a vessel by, if she was running free.

"I was working with the men amidships, for we were short handed and had only two young fellows we had picked up in Charlotte. We had to take the halliards to the capstan to get the wet sail up, and as she began to get aloft I sang out to one of the youngsters at the wheel, 'Let us know when she begins to gripe on you and I'll ease off the crotch-tackles and give her sheet.'

"'She's doing fine!' he yelled back. 'She steers better this way than if the sheet was broad off.'

"I guess she knows what she wants better than we do," I said, and went ahead with the mainsail.

"She certainly made most fellows sweat at the wheel to keep her straight, going free, and I've often wondered which side of a steamer she would take in passing, but she was smart in stays and came 'round like a top."

Vessels like the Speedwell or a reputed twin of hers, the Twilight steered hard because they were short, wide, and full in the quarters, and their masts may not have been spaced properly. Their dimensions made them excellent carriers for their inches, giving them fifty per cent. more capacity than sharper, leaner vessels requiring as much space in the canal locks and almost as large crews. When they were new they were sturdy, and they both came through the great gale of Nov. 6th, 1880, with credit. But old Capt. Ewart, who sold Capt. Williams the Speedwell, told him that she was ripening, even though she was then hardly in her 'teens, and this the partners found was fair warning.

She got on the ground in very still weather one day when making the dock at Belleville—something many yachts have done many times since, for the Moira River mouth has a tricky set of shoals for front teeth.

The partners didn't think she was aground, for there was no wind, but she was not moving, so they hailed a little tug to give them headway towards the nearby dock.

The tugman looked askance a budging the bulky, motionless schooner with her four hundred and fifty tons of coal, but they told him to go ahead his heaviest, and he did. The line was led through a wooden chock in the quarter, so as to give her the right cant. When the tug running ahead the full length of the line, fetched up on it hard the schooner never moved, but the stout line cleft the wooden chock in twain and shore away a dozen stanchions and thirty feet of the main rail and topgallant rail above them and the adhering bulwarks and one of the stern davits. There was enough kindling to build a bonfire for Belleville's celebration of the good old Queen Victoria jubilee.

"And I didn't know there was a tug in the Bay of Quinte strong enough to pull a setting hen off its nest," commented the insurance adjuster.

"Oh, this one just rubbed the Speedwell's feathers the wrong way," consoled Capt. Williams, as hi partner, the expert carpenter, cast up what the repair bill would be.

"With reference to story of the Esplanade Fire in issue of Oct. 12th," writes Richard Goldring, under the brave Union Jack, "I beg to advise you that the schooner Maple Leaf mentioned therein was always a schooner and never a scow. Also regarding the schooner Helen going ashore below Oshawa, my father was never in charge of the boat and was deceased several years before the said incident.

Muir Bros. Drydock and shipyard at Port Dalhousie is still active and in its ninety year history has had about every experience known in the marine world, except failure. With an historical sense which it ought to have, and has, its superintendent this week put up the following notice for employees to see:

The tug had been purchased by the Muir Bros, from Capt John Harrigan for the valuable machinery and equipment aboard. With that removed, the old wooden hull, owned by Capt. Harrigan had to be towed to a last resting place and he chose a place where rest other tug hulls which once belonged to him. Capt. Harrigan's lineage is easily guessed, hence the title of the graveyard.

As the "J. R. Binning" is the last of the tugs once so useful and active on the second and third Welland Canals, Muir Bros, ordered the ancient shipyard bell to be tolled as she started from the shipyard (towed by an up-to-date launch), on her last trip, for her passing was considered an event typifying the era of an old order in the marine life of the locality.

Sir—I own and sail a yawl named Aileen. She was raced as a P-boat. No one around here seems to know much about this boat's history. Could she be the Aileen you mention in the account of the trip across the lake by a cutter of that name, the night of the Esplanade Fire of 1885?

Answer—No, your yawl would be Aileen II., designed by Alfred Mylne in Scotland and built there in 1907, as a candidate for the Canada's Cup. Her owner was Mr. W. G. Gooderham, who owned and sailed the first Aileen at the time of the Esplanade Fire. This first Aileen was broken up before the second was built, and was much larger. Aileen II was raced by the late Norman R. Gooderham, in the Canada's Cup trials, and not proving successful, was renamed the Kayak. She was a sloop originally; never a cutter. Thank you for the stamps.

THE SPEEDWELL, AS THE LATE C. I. GIBBONS DREW HER

The raffee and squaretail and white paint make her almost unrecognizable by those who knew her in the gay nineties, when she was painted black and had no such fancy sails. They had vanished before Capt. Williams got her.

Creator
Snider, C. H. J.
Item Type
Clippings
Notes
In the microfilm edition of Schooner Days, the scrapbook entry is stamped 457 with the 'X' of the Roman numeral blotted out. However, the numbering of the printed columns is continuous from this point having skipped ahead by a count of ten.
Date of Publication
26 Oct 1940
Subject(s)
Speedwell (Schooner)
W. Y. Emery (Schooner)
Aileen (Yacht)
J. R. Binning (Tug)
Personal Name(s)
Williams, John
Language of Item
English
Geographic Coverage
Donor
Richard Palmer
Copyright Statement
Public domain: Copyright has expired according to the applicable Canadian or American laws. No restrictions on use.
Contact
Maritime History of the Great Lakes
Email:walter@maritimehistoryofthegreatlakes.ca
Website:
http://www.MaritimeHistoryOfTheGreatLakes.ca/ 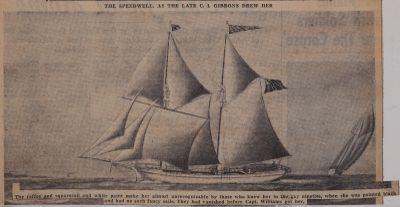