TO offer a cargo for Port Nelson, Ontario, to-day, would be like quoting rates on a load of postholes.

Tell a modern sailor to go there, and he would stick out either his tongue to say he had never heard of the place and you hadn't either, or his thumb to get a ride thither on rubber. If the latter he would have to make some thirty miles of westing from Toronto on the Lake Shore highway, and then he would come to some very fine old pines, second-growth perhaps but imposing, and some very fine old acacia trees, or honey-locusts. They were planted ninety years ago or more by the gracious lady for whom was built and named the parsonage of Roselands, still standing amid its winding driveways thereabout.

By the time he had caught his breath abreast of Roselands to ask "Is this Port Nelson?" he would be in the town of Burlington (if the brakes held), and he would be hearing, "You passed it a mile back."

If he turned back that mile he would see Roselands, where the English wife of the Rev. Thomas Greene, D.D., laid out her rose garden and planted acacias, from 1838 onwards; and one or two old houses, including a red brick one, with a curious cutoff corner and incurious added shopfront; and a number of smart modern bungalows and residences, in well-landscaped gardens running down to the lake. But never a trace of harbor or docks or even foreshore would he find.

Indeed, he would have a good eye if he could detect, under the grass, the end of the old road, once rutted with grain-laden farm wagons in mile-long procession. Seventy years ago they creaked lakewards between the old red brick store with the amputated corner, and the old apple orchard yet living. This road, long known as the Guelph Line, used to be lined with piled lumber for half a mile back each spring, when the winter cut had been hauled in on sleighs for shipment by vessel as soon as navigation opened. The road swung abruptly east and down the bank, passed the ample grain warehouses and the wooden wharf, and then climbed the bank again, to keep the teams from cluttering the crowded foreshore.

The beach west of the wharf was then a long stretch of gravel, forming an excellent shipyard. Now there is no beach at all. Nor wharf. Nor warehouses. Nor bank, for that matter. Orchard and gardens come to an abrupt edge above the lake, with a fifteen-foot drop to the boulder-strewn water. The bank has been eaten back seventy-five feet in fewer years. A township drain spouts from a concrete embrasure where the road used to come down. A little concrete breakwater points to where the timbers of the old wharf yet lie, now away out in the lake, far under water.

Many a small ship, and some big ones for the time, found birth and being on the vanished gravel bar which was the site of one of Port Nelson's faded industries. The following list is not complete, though impressive:

Echo, 41 tons, built by Alex. Le Clair for Capt. J. McSherry, 1854. The Echo remained in the family ownership until she was buried under the Toronto waterfront improvements of 1920.

The Crimean War and the Reciprocity Treaty of 1855 gave a great lift to Canadian business, including shipbuilding, and in this prosperity Port Nelson shared. Vessels built about this time included:

City of Toronto, a schooner intended to carry timber overseas.

Hope, a scow built by Capt. Jas. Johnston, for the trade up to Dundas by the Desjardins Canal. She had no topmasts, and used to cant her mainmast aft to scrape under the Great Western Railway bridge. The Hope, rebuilt and rerigged, was in commission around Toronto up to 1910.

A little later were built:

Ionia, a rather large schooner scow.

Who knows any more?

A neat white cottage has been built where the wharf and warehouse vanished. The shore here is groyned and the bank faced with stone walls and flower beds. The cottage is occupied by Clinton Cotter, whose father, Frank, built it. Clinton is a Burlington-born lad, returning after 45 years in Philadelphia to enjoy real life near the old homestead.

Hugh Cotter, the grandfather, it was, who built the old red brick house with the bevelled northwest corner. Hugh also built or owned the wharf and the warehouses. He was a pillar in the little wooden "Wesleyan Methodist Chapel, 1862," which our thumb-waving sailor would find by looking up the street, if the traffic on the highway would spare him a glimpse under the evergreens.

Port Nelson retired from the port business before this century began. In fact, it began to retire in 1873, when it and its neighbor a concession-line away, Wellington Square, became incorporated in the new town of Burlington. Port Nelson kept its name and post office. Wellington Square vanished completely, although Rev. G. W. Tebbs, succeeding to the charge of St. Luke's in the fulness of time — "Old Man Sunshine" to you and me on CKOC on Saturdays at noon—has a letter addressed to "Wellington Square, near Hamilton," with a postmark of this century.

Capt. John Williams, our prize survivor of the lakemen of long ago, had a cargo once for Port Nelson; of which you may like to hear in next Saturday's Schooner Days.

THE PINES ARE THE BEST LANDMARK FOR THE PLACE ON THE HIGHWAY TO-DAY. 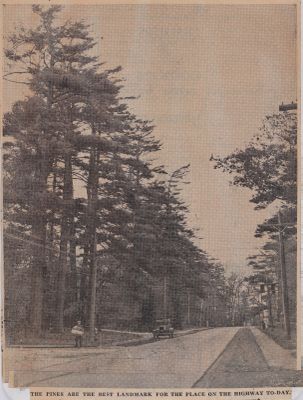