REV. THOMAS GREEN, D.D., of the Irish Church Mission Society, built a little Anglican place of worship among the pine trees near the lake on the old farm some thirty Miles west of Toronto, where Augustus Bates had settled in the year 1800.

When Augustus Ford, U.S.N., made his chart of Lake Ontario in 1836 he called the headland which then projected Cape Paradise, perhaps because of this reminder of heaven, but there was not enough of a settlement around the church to give it a name.

On Jan, 6th, 1839, Lieut. Bainbrigge, of the Royal Engineers, made a note on his sketch-map "New Vill.," near the church. When his commander, Col. Oldfield, filled in his plan of the province this same year, he put the name Port Nelson on this new village.

"A small village in the township of Nelson, a mile and a half from Wellington Square. It contains about 60 inhabitants, one store, one tavern, one shoemaker."—Smith's Canadian Gazetteer.

"There are storehouses for storing grain for shipment, and a considerable quantity is exported."—Unnamed. writer.

Freeholders of the villages of Port Nelson and Wellington Square petition the county council for incorporation jointly under the name of Burlington.

A post office for one hundred and seventy-five families in a pretty residential section of the thriving town of Burlington.

A few of the early houses survive along with the name; notably Roselands, Where the Rev. Dr. Green's lady planted rosebushes and acacias along the winding drives to the vicarage, and the red brick homestead of the Cotter family, with its bevelled corner, and the Wesleyan Methodist chapel built in 1862, on the old Guelph Line or Nelson Line.

But the lake captains, and the shippers and forwarders and grain merchants and pumpmakers and blacksmiths and carpenters and shipbuilders and all who made the place a port, are under the sod, as their wharf and warehouses and shipyard; and ships built there, and the very roadway which led to them, are under the waters of the hungry lake.

Waves thundering in all the way from Oswego, two hundred miles southeast, have worn down the rich red shale of Cape Paradise to a nub, and they gnaw remorselessly at the bared bone. It is harder now to find the remains of the headland than to find the originals of the village among the new homes that have been built principally to the eastward of the old "Guelph Line," which once formed the eastern boundary.

SOME of us find amusement in clothing with muscle and marrow the ghost ports of our Great Lakes.

Take the old Port Nelson, to which the Speedwell voyaged in the very late 1880's, as told last week. You cannot find it on the chart now, or if you do it isn't there, as Nosey O'Brien would have said. Port Nelson still has a post office, but that floats on the fringes of Burlington like a buoy above a lost anchor.

Port Nelson was submerged sixty-seven years ago when it was incorporated with the village of Wellington Square in the new village of Burlington. The succeeding town got its name, we are told, from folk from the East Riding of Yorkshire, who saw a resemblance to their native Bridlington Bay in the configuration of the head of Lake Ontario. Burlington Bay was so named by Royal proclamation in 1792. Simcoe, with his passion for fitting old handles on to new jugs, certainly approved. The name is consistent with the fact that the great ridge north of Hamilton, high and dry inland at Clappison's Corners, has long been known to sailors as Flamboro Head, after the Yorkshire headland. It is a good landmark coming up the lake from the southeast; it is the first of the north shore you may see after raising the Highlands of Scarboro, but it is less apparent as you close in with the land.

Port Nelson and Wellington Square were two thriving little ports a hundred years ago. Wellington Square, completely vanished, had three wharves once, and its own fleet of vessels. Port Nelson, vanished, too, as a port, had only one wharf, but many ships, including daily steamers, used to call, and some were built there. We named a dozen in a recent number, and there were more. Grain, lumber, cordwood, tanbark, staves, spars and moulding sand and livestock were shipped out of Port Nelson last century, and coal, machinery, drygoods and provisions came in by vessel where now a rowboat would have difficulty in making a landing, and where no trace of wharf, warehouse, shipyard or even wagon road is to be seen.

All that now recalls Port Nelson as a port is the imposing row of second-growth timber along the highway, sprung from the cones of white pine which once yielded the planks for the decks of Port Nelson vessels and covered these decks with deals to the height of the sheer-poles. The same tall pines supplied the spars which spread Port Nelson vessels' sails, or found their way to the sea in rafts and sometimes outfitted the wooden walls of the Victorian Royal Navy.

CAPT. TUFFORD was looking at some snapshots The Telegram had made of the red clay bank that Lake Ontario is still gnawing wherever groynes do not prevent. He said;

"That's about where the old wharf used to be, where the picture shows the township drain spouting into the lake. The grain warehouse would be in front of that. The old foreman used to get us boys into the bins when a vessel had to be loaded —and could he swear! The harder he swore the harder we'd shovel, to keep the hopper full.

"They'd work all night, perhaps, and it would be a fine sight to see the lanterns waving, and the wagons rumbling down the runway loaded and coming back up the road curve empty, and the checkers and weighers wetting their stubby pencils for the tally, and the big scoops going whish! whish! into the yellow wheat.

"Some of it was run into the vessels in little cars or trucks, and some of it in wheelbarrows, filled from the spouts or chutes. Every last pound of it had to be checked and tallied, for the farmer had to get his last cent for his crop—it maybe meant a year's work—and the shipper had to see that every ounce of grain he had paid for went into the vessel that would carry it to Oswego—and came out of her, too.

"And the captain would have to watch like a hawk that he was not long-changed at one end and shortchanged at the other, for not only did he lose the freight on any shortage between the shipping bill and the unloading receipt, but in some cases he had to make good the difference. Shrinkage of the grain in transit might cost him as much as the whole freight he earned.

"And then there was the rush to get the lumber out in the spring, when navigation opened after the winter's cut, and the sawmills were all running, and the lumber piles lined every street, in Port Nelson -- all nine of them. First street and Guelph street and St. Paul's and Market, and Beaver and Green and Water and Port and Front, some of them now washed away. The village would be full of the scent of new boards and clang and jingle of harness and the flat sounds of planks slapped on deckloads. It was a good time, with so much fine white pine moving."

THE END OF THE ROAD

A township drain spouts from a concrete embrasure where the old Port Road used to come down. The dip in the bank above the concrete is the groove worn by the thousands of waggon wheels.

AN OLD - BUT NOT SO VERY OLD, 1877 - MAP OF PORT NELSON, which had already lost its name, this section of Walker and Miles' Historical Atlas of Halton County all bearing the inscription of the new town of Burlington. Port Nelson was at the southeast or lower right-hand corner. The illustrations in the Atlas refer to contemporary buildings in Georgetown. 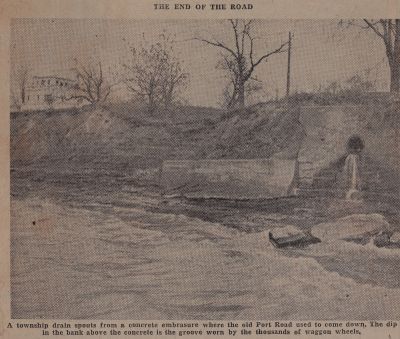