STONEHOOKERMEN who plied that laborious trade along the lakeshore, were supposed to be universally rough and tough. Some were. Many were decent folk with about the same social standards as the farmers who accused them of robbery when they raked stone and gravel from the lakefront of their farms.

None of them would work on Sunday, no matter how tempting the weather. Some were profoundly pious. But who ever heard of a stonehooker scow named after a preacher?

The one was the Joseph Wild of Bronte. She was named after the Rev. Dr. Joseph Wild, the longhaired, full-bearded, eloquent, scholarly Anglo-Israelist, who held the chair of Oriental languages in Albert College, Belleville, and put that institution on its feet with a fund of $20,000, and filled Toronto's Bond Street Congregational Church to bursting point in the 1880's. Before that Dr. Wild had had a Methodist charge in Hamilton, and it was probably then that his personality so impressed the pious professors of the stone trade that the new scow bore his reverend name.

She has a certain claim to fame as being the first craft in which Capt. Charles Tufford of 364 Montrose avenue put to sea. Capt. Tufford is one of our oldest surviving steamboat men. He was born at Port Nelson, and recent Schooner Day articles on that vanished lake port recalled his voyage in the Joseph Wild.

Perhaps two stonehookermen put too much trust in another's good name and their own good intentions, for they left the hooker lying at the single Port Nelson pier Saturday night while they went home to Bronte, a few miles east. They stayed on, presumably for church, and an east wind came up and rolled in a sea which began to pound the Joseph Wild against the pier harder than the Rev. Joseph ever pounded the pulpit.

Alex. Le Clair, the shipbuilder, looked out from his window before starting for the Wesleyan Methodist Chapel and saw the wrecking going on. "That basket will be in splinters before those boys get back from Bronte," said he to the universe. "Heigh, you" -— to Charley Tufford -— "Run across to the Royal Hotel and tell Jim Doherty I want him on the dock right away."

Jim reported for duty, yawning after a late Saturday night's ministrations. He was followed by young Charley and a slightly older boy.

"We've got to get the Preacher out of here, Jim," Alex. Le Clair said. "Let's run her over to the canal. You kids want to lend a hand? Look lively then. Hop aboard and haul in this line when I cast off!"

Young Charley eyed the varying gap between the plunging hooker and the pier, saw his chance, and scrambled over the rail. His companion funked it. Next second Alex. Le Clair was tumbling aboard and the Joseph was surging off from the dock, her nose pointing for Hamilton. Alex. Le Clair took the tiller and Charley and Jim got small scraps of canvas on her, and she went off rolling, ducking, diving like a wild thing, her squatted sails puffed into bulging scrolls, every sheet and halliard either standing taut as bars or curving out like hoops in the strong wind. Charley could only hang on at the foot of the mainmast, once she got started, and hope he would stay on board. And Alex Le Clair, his beard blowing in the wind, sang like a sealark as he nursed her along with the creaking helm. Less than three miles of rough going and they rounded up in the inner part of the canal piers in Burlington Bay. It was along walk back for the short wild sail, but it was worth it. And this was the future captain's first voyage.

ALEX LE CLAIR was the great shipwright of Port Nelson, though there were others, among them Capt. Miller, who wrought still more mightily at Wellington Square. Alex Le Clair came from Nova Scotia; perhaps he was a brother of the "E. Le Clair, carpenter and shipbuilder" mentioned in the Port Nelson directory of 1851, but he may have been the same man. Early directories are not infallible. Alex Le Clair knew as much about sailing schooners as he did about building them. Capt. Tufford says:

"I remember one morning the Sweepstakes of Wellington Square— a fine big new schooner, a rival of the White Oak of Oakville, and both of them launched the same time I was, in 1867-—left the pier in a hurry because the wind was coming in from the eastward, and with ten thousand bushels of barley in her she was beginning to bump the bottom. She got off in such haste that they couldn't get the shore end of a fine big new line off the spile, and had to cast it overboard from the vessel. Once clear of the dock she made a tack out into the lake and rounded to and lowered her yawlboat, to come back for the line and bring it out to her. The men in the boat did their job, and the Sweepstakes stood in on the opposite tack, to pick them up. Her centreboard touched the bottom, and she would not come in stays to tack out again; she lost headway, sagged back and grounded close to the pier.

"'Tell Mr. Waldie to telegraph for a tug, quick!' yelled the captain. I was only a little fellow, but I knew her peril and I liked Johnny Waldie, who had come to Wellington Square as a butcher's boy and now owned a big butcher shop and several vessels, in Burlington, the Sweepstakes one of them. So off I ran at top speed, though the shop was more than a mile away, and the telegraph office still farther. There were no telephones then. I dashed with Mr. Waldie's message to the operator, while he was hitching up his horse and buggy, and drove back with him to Port Nelson. When we got there the Sweepstakes was under weigh again and making good licks towards Toronto, and I felt foolish. Alex Le Clair was turning from the end of the wharf with a satisfied sigh.

" 'Alex Le Clair saved you a schooner as well as a tug bill, Mr. Waldie,' one of the grain men said. "The Sweepstakes was on the bottom all right, and yelling for help, and he sang out to the captain, 'Keep the canvas on her! Don't lower away! Slack off your mainsheet and trim your jibs to weather, and haul out your foresail with your boom tackle.' They did that on board, and that gave her head a cant offshore, and first thing we knew she was gathering weigh and moving out into deep water. He's pulled up his fly to the masthead, to show he don't need a tug, so that proves she's not leaking any."

"I've seen Alex Le Clair launch three vessels in three days from the long strip of gravel beach that used to run along under the red clay bank. Now the gravel's gone to make country roads, and the red clay bank's goin' to make muddy water," said old Nosey O'Brien once, of the same master builder.

"That first day he launched the City of Toronto, a fine three-masted schooner meant to carry pine lumber to the Old Country. But she was lost at Oswego in the fall of that same year."

(Was this City of Toronto the old brigantine Dundonald, rebuilt and so renamed? There was such a vessel listed in 1864. She is not to be confused with the square-rigged ship City of Toronto, built on the site of the present Union Station in 1855, and sent to England. Nor with the steamer City of Toronto, long ago on the Niagara run. The name was a popular one, and the Port Nelson vessel may have been none of these three, but a fourth craft so christened.)

"The next day," said Old Nosey, "Alex. Le Clair launched the Agnes Greenside. She was smaller. The next day he launched the Clifton. She was a little vessel, too. I last saw her loading tanbark at Port Union for Niagara in '71.

"Alex Le Clair built the Echo, too, and the George Henry. There was lots of buildin' done while the fine white pine and white oak was1 growing on the ridge above."

Such was the tribute lake shore piety paid to the great preacher, Dr. Wild, seventy years ago.

"WESLEYAN METHODIST CHAPEL, 1862," still standing on the road that once led to Port Nelson's wharf, waterfront and shipyard. 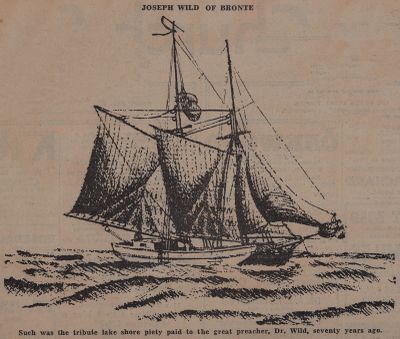