KIPLING called Lake Superior "hideous." He could not accept the idea of an unbounded horizon of fresh water. After sailing Father Superior in twenty-five Decembers, Capt. James McCannel mildly described him as "a man's lake." Schooner Days has only been six times to Lake Superior, twice in summer and four times in winter, and will take Jim's word against Rudyard's, who seems to have been seasick or something when, he wrote: "There is a quiet horror about the Great Lakes which grows as one revisits them. Fresh water has no right or call to dip over the horizon, pulling down and pushing up hulls of big steamers; no right to tread the slow, deep-sea dance-step between wrinkled cliffs; nor to roar in on weed and sand beaches between vast headlands that run out for leagues into haze and sea fog. Lake Superior is all the same stuff as what towns pay taxes for, but it engulfs and wrecks and drives ashore, like a fully accredited ocean -— a hideous thing to find in the heart of a continent."

No sailor speaks lightly of Superior, yet no sailor ever curses this masculine lake as he may Michigan, Huron, Erie, or our own Ontario, - Superior is so strong he is past praise or blame.

One sounding in the lake is 215 fathoms, 1,290 feet. That is thirty miles offshore from the Pictured Rocks. Another is only 3 1/2 fathoms, 21 feet. It is equally far from land, the pinnacle of an underwater hill as high and steep as the Royal York, for hundred-fathom water lies around this Superior Shoal. The Royal York Hotel in Toronto is 405 feet high and the Bank of Commerce is 475. If one were stood on top of the other in Lake Superior in the deep hole, seventy miles west of Whitefish Point, and the 300-ft. City Hall tower were piled on top of them, Big Ben would still be a hundred feet and more under water.

Superior would make three Great Lakes, each as large as one of the other four of these mighty quintuplets which horrified Kipling. The huge copper-bound horn of Keweenaw Peninsula, hooking out from the middle of the south shore, the eastward stretch of savage Isle Royale from the Rock of Ages, suggests the shorelines of this tripartition.

Though the French had barges carrying copper on Superior two hundred years ago, and though twin and single cities crown it, head and toe now, the lake is still as wild and savage and primevaily simple as the Garden of Eden. Moose come down to harbors to bathe and escape the summer flies. Bears munch blueberries on the rocks as steamers go by, Indians still trap and fish from canoes, and wolves pad after the deer. Millions of evergreens now stand blackly against the background of snowdrifted rocks or the frozen spray of great cataracts like the 90-foot fall at Otter Head. In summer they are lost in the emerald ocean of hardwoods.

Herring are so plentiful that we pumped them through the A. A Hudson's ballast tanks this December. Freighters sometimes breakfast crews of thirty men in this way. Fine whitefish, salmon, trout and brook trout have had a reputation here for two centuries. Yet the lake is so cold-—40 degrees) in summer—-and so deep, and the shores are so hard and so mineralized that one might expect the fishes to freeze their fins before they found their food.

The water comes up in the bucket crystal clear, with a brittle look about it, as though it would splinter. Overside it is dark, dark green, almost black, still so clear one may read a steamer's draft marks all the way down. Three fathoms anyway. If the sky is clouded over, as it usually is, the waves are all shades of gunmetal, from grey iron castings to polished black. When the sun comes out, as he does at times with great brilliance, the gunmetal is transformed to sapphire and azure. When the storm wind covers the lake with breaking wave crests these swarm like packs of grey wolves rather than a herd of white horses.

The lake is lined with cliffs of iron, copper, gold, silver, amethysts, agates, calcedony, jasper, porphyry, greenstones, crystals. I've told before, how on Capt. McCannel's farewell to Superior four years ago a perfect stranger caught up to him on the snowy streets of Fort William with a fruit basket full of quartz crystals and mineral samples for him, each wrapped in a scrap of newspaper.

On the south shore at sunset the Pictured Rocks, a hundred feet high, outdare highway signboards in color. Across Superior's frigid and heaving bosom floats the wealth of a continent -— logs, lumber, pulp, ore and grain from three provinces, replaced by coal, clothing, cars and all kinds of manufactured goods from the consuming east. Nor should we forget that, broadly speaking, Lake Superior water supplies electric power from Manitoba to Montreal. (Yes, yes, we have heard of Gatineau; also Beauharnois.)

Lake Superior is so large a whole edition of The Telegram could not completely depict it. At the end would remain Capt. McCannel's epithet: "A man's lake."

It cannot be dodged, cajoled, absorbed, eliminated. It is there to be used. Faced fearlessly and used rightly it is as powerful an agent for man as the Ojibway's eponymous hero, Nanibajou, whose exploits are dim legends of this Big Sea Water. Misused, feared, shunned and avoided, it would split this Dominion in two.

The compiler of Schooner Days has been trying to show by his own experience of this December how Ontario men and Ontario ships use Lake Superior and the other Great Lakes at their grimmest, in the last month of the year, within a week of the shortest of the short days, and the longest of the black nights. The A. A. Hudson's voyage seems to have met with some approval on the part of the fans, for the sheaf of Christmas cards this week was very thick and most of them mentioned it.

I am entitled to call you, as I was honored in a complimentary cruise to myself and friends, enjoyed by all, in Gardenia on the Bay of Quinte by crew of old-timers, of which you were a member. I want to say that I was much interested in the published sketch of the life of Commodore Aemilius Jarvis, on which you at least put your hallmark of approval, appreciated by all readers of "Schooner Days."

The R.C.Y.C. will never have another Aemilius Jarvis, but his life and activities will always be an inspiration to all yachtsmen.

My earliest memory of this great skipper was his regular circuit regatta of L.Y.R. Association at Massassaga Point, Belleville, about 1877. He was a young skipper, but a smart, snappy one, with little black goatee, and he crossed the starting line in the lead every time and I might say finishing line also.

I do not remember name of the boat he sailed but of course it was one of the largest class.

I was cabin boy in the Victor, 35-foot clinker built centre board type common in those days. The only boat that beat us was the Katy Gray, built by Alex. Cuthbert at Cobourg winter of '75-76, but taken to Belleville the following season, where Cuthbert built many successful yachts later, among them several America Cup contenders.

Belleville had a great fleet of yachts at that time but did not succeed in lifting the cup, owing to lack of cash and difficulty in taking boats down through the old Erie Canal to New York.

I want to mention Katy Gray again, to say that she carried four jibs and a ghost of a mainsail for a boat of her size; and was queen of the lakes. Owned 20 years in Oswego, N.Y., sailed the lakes over 50 years and never lost a man. Many old-timers may remember her. I have always loved boats and the memory of Aemilius Jarvis in that old-time regatta has never faded from my mind.

AN APPRECATION OF THE HUDSON BOYS

Sir,—It: is with pleasure that I read your page in The Telegram each week, as the first day's work I ever did was to help load a schooner with lumber, at French River, Ont. The Sephie was her name. She carried 350,000 feet of lumber. You have never mentioned her yet that I know of. There was a great trade in lumber there in 1895. You mentioned the Azove once, and I helped load her many a time—-she carried 250,000 feet-—and the Pandora.

Those three came in quite regular. The Sephie made a trip a week to Sarnia. She would load, starting Monday, and sail there, unload and be back next Monday. This may not be anything unusual, but to me who never sailed on a vessel it seems good. The smallest steam barge I helped load was the D. R. Van Allan, took half a day to load, and the largest the W. P. Ketchum. She took one million feet six inch strips out of that yard. I mention these boats as they stand out clearest in my memory of those days. I'd like to know what has become of them.

Your crowning story to me was Saturday's, as I knew the Hudson boys of old. It's many a year since I've seen any of them but I wheeled for Archie on the Geo. A. Graham in 1914 and his brother Dalton was watching. Decking at first, Bert Lakeing was first mate, later captain of the United Lumberman; then I lost track of him. When you're talking to Dalton ask him if he remembers the wheelsman who taught him to steer, also to read the compass, as it was I that did so, and it made it doubly interesting to read your story to-day.

I quit sailing forward in 1915 and became a engineer. In 1918 I came to Toronto and worked for John E. Russell as marine engineer, but in 1922 I started stationary engineering and have been one of the engineers at Colgate-Palmolive-Peet Co. ever since, just an ordinary engineer when I could have been skipper as well as Dalton. However, I always loved engines since boyhood and it gets a fair living.

I wish you would write a story of the storm of Nov. 9-13, as I was through that as wheelsman in the Turret Chief. We were piled up on Keeweenaw Point and for three days we stayed ashore, not knowing where we were until a trapper told us. It was something to remember, but what would our lives be if there was nothing to remember of the old days? Well, thank you, for that last story especially.

BEFORE MIDLAND WAS MIDLAND CITY<>/strong>

Dear Friend: Why do I say friend? Schooner Days has always been a friend of mine. I have been reading an account of your trip in the A. A. Hudson, and it certainly is interesting; yes, very interesting to me. So many sailor men out of Midland, Collingwood and Owen Sound, I might say from the foot of the Georgian Bay. While I am not so very old, I have a very good memory, which takes me back to the middle seventies with some ease, when Hogg Bay was a common name and tug centre.

I quite well recall going from Waubaushene to Penetang by tug and abreast of where Midland now is there was a smoke arising on the shore, and I overheard one man saying to another: That will be that new place. The second man said, Yes. The new place was shortly after known as Midland City, The Midland Railway reached Midland City in 1878. Well, so long, and a Happy New Year.

THE SEPHIE, bound up light for another load of lumber.

WHY OUR BRITISH MAIL ARRIVED FOR CHRISTMAS

ROWLEY MURPHY'S vigorous drawing shows an indefatigable destroyer on her job bringing a convoy through the blitz. 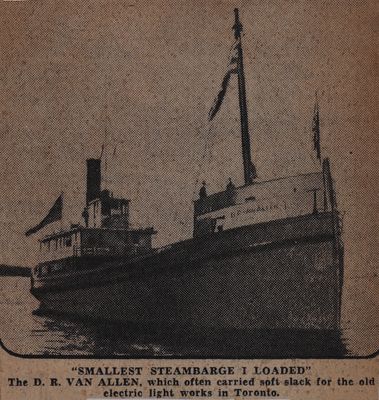 Why our British Mail Arrived
Groups of Related Records