MANY years since—-fifteen to be exact-—Mr. G. P. Jenkins, 21 Nasmith avenue, sent the compiler of Schooner Days some long excerpts from the hotel register of the Wellington Hotel of Toronto, containing references to the arrival and departure of steamers ninety years ago. They are directly connected with schooner days in that there were more schooners at that time than steamers. The schooners had not yet even relinquished the passenger trade, and one is mentioned in the literary remains of the unnamed hotel clerk who compiled The Wellington's register for 1848, 1849, and 1850, which passed into Mr. Jenkins' possession. "Express" arrived from Kingston in her in as good time as the steamers were making.

In the years mentioned all travel to and from Toronto was by schooner, steamer and stage coach or private vehicle. There were no railways, radios, or motor buses. The Wellington as a hotel was the King Edward or Royal York of its day. Being close to the wharves which then jutted from the bank below the south side of Front street, its register was a convenient bulletin board for notices of departing steamers. Some of these follow:

June 23—The steamer "Despatch" will leave for Hamilton this evening at 1/2 past five o'clock.

The Despatch was then a new steamer, having been built at Hamilton in 1842. She measured 200 tons and was commanded by Capt. Ed. Harrison.

July 15—Allen's Express leaves for Hamilton on Monday, and Montreal on Saturday per "Princess Royal."

"Express" was at this time any fast message service, and would include passengers, mail and package freight. The Princess Royal had been built at Niagara in 1841. She became a tow boat.

This was not, as might be thought, chronicling the movement of nobility, but the progress of one of the early propellers on the lakes, a form of steam navigation then a novelty. Both the Despatch, before mentioned, and the Earl, figure in a letter of a Dunnville lady written from Port Maitland, May 9th, 1848, two months before this entry.

"I fear my letter will almost be too late, but this most melancholy accident on the lake has so occupied all our attention that I could not write before. You have probably seen full particulars of it in the papers, but as it occurred within two miles of us I will mention it again.

"The Despatch steamer, on her way to Buffalo, ran into the Commerce propeller, bound for Port Stanley with a detachment of the 23rd Regiment on board. She sank in fifteen minutes, and forty men, women and children were lost.

"The assistant surgeon had left a wife and child in Kingston. He was lost. The other three officers were saved but lost everything they had. One of them said he had just drawn three months' pay in advance. Henry went to see them to-day. They were all taken on board the Minos (the Government steamer). We just now saw them leaving in the Earl Cathcart. The ensign (Sir Henry Chamberlain) and a few men are to remain here to attend to the melancholy duty of burying any of the poor fellows whose bodies may be washed on shore. They are bound for London. The regimental plate, wine, stores, etc., are all lost, and a very large sum of money. About seventy men are saved. The most of them were without clothes. They have been partly supplied from Dunnville and this neighborhood, and we all sent them all the bedding and blankets we could spare. A poor little fellow, son of the commissary in Montreal, was going up with them for a pleasure trip and he was lost. You may suppose it banished everything else from our minds."

To resume the register:

September 5—-The "Princess Royal" will be moored in the Bay at 1/2 past 2 o'clock for fun, and leave the wharf at 6 o'clock for Niagara for money.

Now just what fun did they have aboard the Princess Royal in the 3 1/2 hour interval?

October 2—Captain Sutherland will send word at 8 o'clock this evening to the City Arms at what hour the "Magnet" will leave for the Provincial Exhibition at Cobourgh. (Signed) Geo. D. Wills.

How thirsty passengers must have got, hanging around the bar of the City Arms till Capt. Sutherland made up his mind or his bills of lading and got under weigh for Cobourg! The City Arms was a hotel on West Market street opposite the "old" city hall, which faced on Front street, where steamship lines had their offices. Capt. Sutherland had earlier commanded another steamer Commerce, which was renamed the Eclipse, after eclipsing the Lady of the Lake in her trial run.

Many now alive will remember the old iron Magnet when she was still plodding along in the Richelieu and Ontario line at the beginning of the century. She was built at Niagara in 1847. One may note how Cobourg then got its name on hotel registers, too.

October 11—The "Dawn" will leave at 12 o'clock for Niagara, Queenstown and return by Hamilton to Toronto.

November 4—The steamer "Admiral" will leave this port for Rochester tomorrow morning at 8 o'clock, weather permitting.

November 11—The steamer "Eclipse" will leave for Hamilton to-morrow (Sunday 12th), at 9 a.m.

November 27—The steamer "City of Toronto" (Captain Gordon) will (weather permitting) leave this Port to-morrow at 12 o'clock noon for Cobourgh and Kingston.

This was very good time for the Mary, whatever her tonnage, for steamer schedules between Toronto and Kingston were 20 hours. It was late in the year for sailing vessels to be out, or for any vessel to be out, but apparently this was an open winter. The old Chief Justice Robinson with her ploughshare bow meant for ice cutting, ran to Niagara all winter, or up to the end of February, and "landed" her passengers on the ice of Toronto Bay when the harbor froze over. The hotel notices of her are frequent. One speaks of her leaving at half past eight Christmas morning, and another at the end of January show that she was still in the ring.

December 24—The steamer "Chief Justice Robinson" will leave the Queen's Wharf to-morrow morning (Christmas Day) at half past 8 for Niagara and Queenston. God Save the Queen!

January 27—The "Chief Justice steamer will leave on Monday morning for Niagara and Queenston, and continue running until further notice.

Apparently the steamers had to cease running towards the end of the winter, for a notice early in the spring carries a little boost for the good old stage coach as being safe and sure and it was on in April when steamer notices reappeared.

March 30—The Royal Mail Stage—the safe and sure line—will leave the Wellington Hotel tomorrow morning at 8 o'clock (touching all intermediate points) for Kingston and Montreal—in spite of wind and weather.

April 10—The R. M. steamers are plying daily from Kingston to Dickenson's Landing.

April 25—Fares to Hamilton: Deck, half a dollar; cabin, one dollar per "Magnet" and "City."

April 29—The, steamer "City of Toronto" will leave here to-morrow (Monday) at 9 a.m. for Hamilton. Passengers by this steamer will be in time for the 2 o'clock stage going west.

May 4—The steamboat "New Era" leaves Brown's Wharf for Hamilton at 10 o'clock.

June 8—The steamer "New Era" (opposition to Eclipse) will leave at 2 o'clock for Hamilton.

June 14—The steamer "City of Toronto" will leave this Port Thursday at 1/2 past 1 o'clock p.m. for Hamilton, calling at Oakville. Good dinner and pale brandy. Fares very low.

June 26—The steamer "Princess Royal" will leave this day at 12 o'clock for Kingston and Montreal in connection with the steamer "Lord Elgin." Passengers by this line carried through from Kingston to Montreal by daylight. Deck fares, one dollar; cabin fares, four dollars (meals inclusive); state rooms, extra.

August 3—The steam propeller "Earl Cathcart" will leave this evening for Detroit, calling at intermediate ports.

November 24—The steamer "Sovereign" leaves for Hamilton on the 25th inst, at 12 o'clock noon.

April 23—The steamer "Niagara" leaves for Rochester and Oswego at 8 o'clock,

May 9—The steamer "Passport" (Captain Bowen) will leave this Port for Montreal to-morrow evening at 4 o'clock.

July 2—The steamer "Queen" will leave this evening for Oswego, touching at intermediate points.

This was the Wellington Hotel, which stood on the northwest corner of Wellington and Church streets from 1845 onward. It was largely patronized by visitors from Whitby, Cobourg and Hamilton and by members of the Legislature when the House was in session. Breakfast, luncheon, dinner, tea and bed, one dollar per day. The hotel was so popular an annex was opened in the old "Coffin Block" across the street, in the gore between Wellington and Front streets. The Bank of Toronto was erected on the site of the Wellington Hotel when the building was torn down. This has given rise to the belief that the hotel was at the southwest corner of King and Bay streets, present site of the Bank of Toronto, but pictures of that corner in 1846 show it occupied by a grocery store, adjoining the Primitive Methodist Church, known at the time as the Match Factory, from its popularity with courting couples. The Wellington Hotel was called the Ontario earlier.

THE OLD CHIEF JUSTICE landing her passengers on the ice of Toronto Bay, from a watercolor by the late Wm. Armstrong, C.E., in the John Ross Robertson collection, Canadian Historical Pictures. 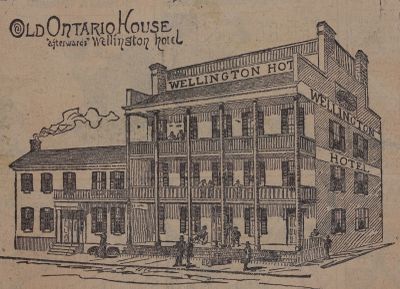