SEEING the sand dredger Cadwell steam out for another cargo from the Niagara Bar that bitter cold morning last Monday raised the nice problem whether her master would be entitled to the Harbormaster's Hat as the first arrival for 1941, or a special pair of electric-heated ear-muffs for being the last arrival of the 1940 season. We understand that as far as the Harbormaster's Hat is concerned it is reserved for the first arrival after the official season of 1941 is opened, which is not yet. The "season" means continued navigation, which has not yet begun. At any rate, it is too much to hope that it will continue uninterruptedly till the bay freezes next year.

Capt. Johnny Williams, battling this winter against heavy colds and making good headway though close to his 85th year, won a great many harbormaster's hats in his sailing days, and none more cleverly than the avalanche of hats which crowned him in 1889.

The story has been told before in Schooner Days, but we repeat it, both to warm the ears of the plucky captain of the Cadwell, and because it comes just now in its proper place in Capt. Williams' life story, which was interrupted by last trips to Lake Superior, Christmas pig tales, and such fancy skating of late.

We left him master of the schooner Speedwell, successfully unloading a cargo of coal at that long-forsaken harbor, Port Nelson, on Lake Ontario, after he bought the vessel in 1888.

IN the course of voyages to Rochester to load that Port Nelson coal and other cargoes, Capt. Williams had noticed that breweries flourished in that vicinity. In pre-prohibition days between the city of Rochester and the village of Charlotte, as the harbor was then named, was a brass rail nine miles long, connecting the numberless lager beer and pig-knuckle emporiums. Capt. Williams concluded that so many bars meant many breweries. Many breweries must need some ice. Where did ice grow better than in his native Canada? How better could it be transported than in his wild-steering Speedwell?

So he saw some people in Rochester about it.

As a result, in February, 1889, he got a telegram stating that if he went to Presqu'isle and loaded ice there of such-and-such thickness he could have $1.50 a ton for it, delivered at Charlotte.

Presqu'isle was a long way off—-a hundred miles to the eastward to Toronto. Winter navigation of Lake Ontario was very chancy. It was possible to get out of Toronto Bay from where the Speedwell was lying, but that was all. What would happen on the morrow or the next mile none could tell.

Capt. Williams said nought. He just fitted the Speedwell out, cast off her frozen shorelines, and sailed down the lake with some cross-cut saws, axes, planks and pike poles in the hold.

The day was the 18th of February.

By the early dusk he was off Whitby, with seventy miles of the perishing hundred still ahead of his squirming schooner. (The Speedwell demanded a three-point sheer from her course as a regular thing, and four points on Sundays. Off the wind the only way to steer her was to double-reef the mainsail and keep the sheet aft and hook on the crotch-tackle).

By some such magic Captain John coaxed her into the mouth of Whitby harbor with no more recalcitrance than a vicious thrust at the lighthouse with her jibboom, which fortunately missed—-and called it a day.

Trudging up to the railway office a mile inland he wired Rochester.

"Weatherbound. Splendid ice here, such-and-such thickness. Williams." Next morning, before daylight, he turned the gang to with their one-handled cross-cut saws and other paraphernalia. After daylight he hired a half a dozen woolen-mitted helpers. Port Whitby harbor is a large clean bay. It was frozen over for almost its whole extent. By dinner time he had the ground-tier of choice blue-white crystal blocks laid along the Speedwell's floor-ceiling. Before supper a shivering telegraph boy brought him the message he expected, "Load and come."

He loaded and came. The weather was not bad. The Speedwell had a good run to Charlotte. Her customary zigzags made it all the easier to scrunch up the shell ice in the Genesee River. In the third week in February here lay this Canadian snowbird by the dockside railway tracks, filled to the rail with prime Canadian ice, a $600 freight earned before other navigation had turned over in its winter sleep.

Capt. Williams came prepared. A temperate man himself he knew that executives, magnates and officials, both of harbors and breweries beneath the Eagle, might have some curiosity as to the "wine of the country" in foreign lands, especially when a cargo of beverage-cooler was being brought in.

So in Whitby he had purchased a stone jar; and with the stone jar he presented himself at the palatial offices of the XYZ brewery firm.

It was not the immaculate Capt. John Williams, known to Kew Beach of Sundays, who convoyed the jar, but Jack Williams, ice-cutter, all dressed up in his ragged fur cap, woolen mitts, tallowed boots, and old overcoat girt about him with a heavy-weather lashing. But the Rochester brewery bosses were discerners of men; and things. He and the jar had a royal welcome. They made out his cheque, complimented him on his ice, and showed him the product it was meant to cool.

Finally he rose to go. He jammed his torn fur cap on his head, pulled a wisp of hair through one of the holes, thanked his hosts again for their hospitality, and said, in the rich brogue inherited from his grandmother, whom he could mimic well.

"Sure now there's wan thing I'd be blamin' meself for if I didn't let ye in on, seein' ye've threated me so grand, an' yit I hesitate to tell ye."

"Oh, you must let us know, captain. Out with it, man," chorussed the jar samplers.

"Well, now, an' it's this. Only mind ye, I wouldn't mention it but for the pain it 'ud give me to think how bad ye'd feel afterwards if ye'd find out widout me tellin' ye, for ye might be blamin' yerselves. Ye see, in our country 'tis the custom, when the first vessel comes into port in the openin' of the sayson, for to presint the master av her wid a new hat."

This was wrung from him with many a reluctant twirl of the battered fur cap and tug at his projecting wisps of hair.

The brewery bosses roared with delight.

"Here, wait!" said one, calling a clerk. There was a muttering of instructions, a minute's -delay, and then Capt. Williams was handed an envelope.

"We don't aim to be behind anybody," said his Yankee ice-purchaser. "You take this up to so-and-so's store and get yourself the best hat in Rochester, with the compliments of the XYZ and the whole U.S.A., and come back with another cargo as soon as you can, and we'll give you ten cents a ton bonus."

After again apologizing for setting them right in this little matter of port etiquette, Capt. Williams weighed anchor and stood for the hat harbor. It was the finest men's furnishings place in Rochester. Better even than Dineen's, which then topped them all in Toronto.

The store clerk was rather abrupt with the customer in ice-cutting get-up.

The clerk showed him a 75-cent "knockabout."

"That's the cheapest we have," said he.

"I could stand something better," John answered modestly.

So they went through the stock of the store, until there were more empty boxes on the counter than there were ice-blocks on the Speedwell's deck.

" 'Tain't quite good enough," said John with a slow sigh. "Ye see, I've got to lead the Sivinteenth o' March parade when I get back to Toronto."

"Certainly, Capt. Williams," said the clerk, recognizing the order of the biggest customer Rochester boasted. "And what else will there—"

The master of the Speedwell went back to his ship, chuckling. He had no more immediate use for a silk topper then than he had for silk B.V.D's in his ice-cutting. But he loved a joke, and he chuckled the more as he reflected that this silken magnificence had a trade-in value of three new hats.

But three new hats were not enough for Capt. Williams. He had already won that many for first arrivals in the schooner W. T. Greenwood, which he had sailed before the Speedwell, and he was ambitious of winning one for his new command from his home port, by bringing her back laden, ahead of the vessels he had left thrice stripped at their winter moorings.

Chances seemed against this, for the Rochester breweries liked the first load of Canadian ice so well that he had to cross the lake to Presqu'isle, where Brighton Bay was frozen glassy smooth, and cut a load for them there.

John Corson, late of the Julia, who had just come into the W. J. Suffel, heard the good news of the new ice trade in Presqu'isle, where his vessel had wintered, and he loaded her for Charlotte as well. The two schooners must have arrived in Charlotte about the same time on this second trip of the Speedwell, for they finished unloading together, and had to spin a quarter to decide which could load first at the coal trestle, for each had a cargo of coal up the lake, the Suffel for Hamilton, the Speedwell for Toronto.

Lucky Johnny Williams won the toss, loaded the Speedwell with 450 tons of coal, and the new silk "tile" he had carried to Presqu'isle and back, and sailed out for home with a nice little breeze on the last day of March, leaving the Suffel still alongside the trestle in Charlotte. He came into Toronto on the first day of April, and began unloading; but the stonehooker Morning Star had brought in a load of stone the week before, so the Harbormaster's Hat was gone for the season. Capt. Williams thriftily exchanged the glorious but useless silk topper for three "christies" to match his three shore suits as soon as he got uptown after berthing the Speedwell.

That night it came on to blow hard from the eastward, and it kept on blowing hard. The Suffel, upward bound and deep laden, iced over and became unmanageable, and drove in on the sand at Burlington Piers, missing the entrance by such a narrow margin that her crew were taken off on the north pier wall. She was not badly damaged, and was refloated after a runway 'had been built from her to the shore, down which her coal cargo was carried, to waiting wagons.

The stout ship CADWELL, carrying on her sand trade this month in spite of zero temperatures. She has been last in and first out of Toronto harbor in a number of recent years. 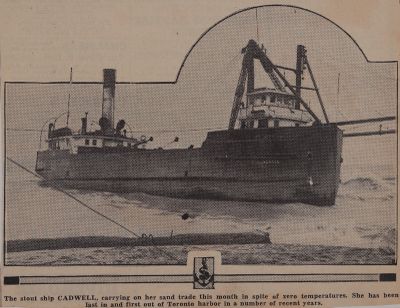