FOR a long time, on the shore of a pretty island in the St. Lawrence near Gananoque, locally called Mudlunta, there lay a trim and well-kept hull of a lake schooner, spars and all. The hull is there yet, though no longer trim and well kept, for ships wear out faster doing nothing than working their hardest, and this one has disappeared until only a few frameheads show above low water.

But curiosity persists about the now ancient wreck, for it is still remembered that she bore the arresting name The Briton—-just like that—-on her sternboard. Last summer Hugh McKandy, Ne Obliviscaris, sent on a sample of her waterstained timbers, blue-black, as white oak becomes with submersion. They had been obtained for him and for Schooner Days by a Gananoque resident—-Mr. James A. Thomson—-and could Schooner Days please give her story?

The Briton was berthed where she finally made her grave, not through faulty navigation or the perils of the deep but because, towards the end of the first decade of this century, her owner, Chas. E. Britton, of Gananoque, had no further employment for her, and he did not wish a faithful old servant to descend from her high estate as a fore-and-aft schooner and become a grubby towbarge. That was the fate of many a sailing queen, and an unenviable one. Perhaps, too, he had a patriotic regard for the name which was a pun on his own, quite intended, of course. It is not known whether it was he who bestowed this name or an earlier owner. Anyway, he gave her a permanent holiday where she could watch the steam traffic go up and down the river and add, by her own saucy sheer and well-preserved lines, a note of picturesque and historical interest to the landscape of what had been her home town for some years.

But The Briton -— repeating the name on her stern—-was not born at Gananoque, nor was that her original name. Schooner Days first saw it on her on the 24th of May, 1903, probably, at the D. L. & W. trestle in Oswego. He was revisiting the place and was shocked at the falling off in the schooner trade, which had always crowded the half mile of trestle ten years before. Now there was just one white little fore-and-after loading, I and only one other schooner in the harbor. This last was the Trade Wind of Whitby, and she was stripped of her mainsail. It was out on the dock, getting patched.

Strolling up to the other white vessel, which had a familiar look, he was surprised by the unfamiliar name, and the way it was displayed. "THE BRITON of BOWMANVILLE." The French always paint an article in front of the name, like the Japs stick "Maru" after it, but we do so very seldom. Yet we usually say "the" before giving a vessel's name, unless she is a yacht or a warship. The name of the schooner Theacto, so christened, was too much for her crew, and forecastle hands never got past calling her "the Actor."

Five minutes survey of The Briton identified her as a boyhood friend, a "South Bear from South Bay," as they used to say in Prince Edward. She was, or had been, the S. & J. Collier of Port Hope, built by Jack Tait in South Marysburg township in Prince Edward County in 1872, at Coopers' Wharf in South Bay, and named for two brothers of the Collier family, Saul and John-—who were captains and vessel owners and shareholders in this new one. Capt. Robt. Snetsinger of Colborne, was her first master. He was part owner from the beginning and later bought her outright. She registered 146 tons and her length was 106 feet 6 inches, beam 23 feet 8 inches, and depth of hold 8 feet 7 inches; a typical Prince Edward County barley carrier of her time, not too deep in the body but burdensome, and able, with her centreboard up, to load at all the shoal loading places in the county. Her quarters rounded in gracefully but not extravagantly and she had a modest knee at her stemhead which gave her some pretensions to a "clipper" bow. Compound names were rare among Canadian schooners, but there was one on the register which beat the Collier-—the Moses and Elias of Whitby.

Schooner Days' first sight of the S. & J. Collier was fifty years ago in the Scott street slip where P. Burns used to have a coal yard. She was then painted white, with a lead-color bottom and green rail and coveringboard, a garb which she retained for years. By this time, the early '90s, she had passed under Port Hope registry. On another 24th of May, in 1898, she was fitting out in Port Dalhousie, where she had wintered. The memory of her snapping colors, hoisted in celebration of the Queen's birthday is a pleasant one. Capt. Alex Baird had bought her after losing the Baltic at Oswego. He did not keep her long, for on her next appearance in Toronto, in 1902, she had a load of hardheads for the crusher, and she was owned and sailed by Capt. Vandusen from Picton. He had changed her paint, and she looked very smart, white above, with a green underbody. It was some time after this that she became The Briton, and went back to her original garb, for she was all in white when she first came out. She sailed as The Briton up to 1910 or later, and lay as a landmark in the St. Lawrence for fifteen years afterwards.

When owned in Prince Edward County she had many races with the Nellie Hunter, another clipperbowed schooner of about her size. They were both coining money in the barley trade with Oswego, sometimes earning as much as $1,000 a week. With barley paying 6 cents a bushel freight they were in great haste with their cargoes, and would blow out sail after sail without regret, if cracking on got them into port sooner for another rich freight. In one race the Collier held the Hunter until the latter's jib-topsail sheets parted. Then the Collier took the lead, and kept it till her flying jib went to ribbons. It was blowing so fresh that they were going to take the jibtopsail off her, but they had to hang on to it now that the flying jib was gone, and in a few minutes the jibtopsail went, too, and they had to clew down the main gafftopsail to balance the lack of head-sail. The Hunter came up on the Collier hand over fist, then her main gafftopsail blew out. They set the fore one to take its place, but that was where they made a mistake; it blew to ribbons and the forestaysail followed, and the Collier staggered around Indian Point ahead of her after all. Both vessels lost a couple of days afterwards baffling around in light airs while they sewed up their flying kites. Bob Snetsinger admitted it didn't pay to blow sails out, even if insured.

Toronto Harbor Commission records show the S. & J. Collier last arrival of the season, on Dec. 14th, 1896; late to be out under sail, although the Defiance came in on the 5th of January, 1898, at the end of the following season. We were tough in those days, and there were no steamheated wheelhouses in the schooners, either.

THE S. & J. COLLIER ON HER LAST APPEARANCE ON OLD TORONTO WATERFRONT 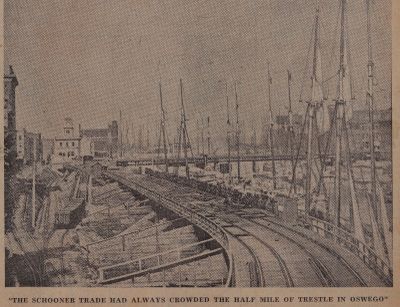