WHEN was the last schooner-load of coal carried into Owen Sound?

Correct answer to that question will not necessarily win the war this spring, but it comes up in connection with some pictures Mr. Leon C. Julien, of that thriving port, sent recently. They, in turn, solved the problem raised by similar pictures, only smaller, which were sent in years ago, with the information that they represented a schooner which sailed from Owen Sound fifteen years before "and was never heard of again." The late Capt. McCannel, who was particularly well versed in Georgian Bay marine history, could not identify the vessel positively from the small prints, but said she resembled the American schooner John Mee, which traded to Collingwood in the 1880's.

"And he was right and you'll agree

That all is right as right can be"—

Only the vessel wasn't the John Mee, though she did look like her, as the John Mee's photographs prove. And she did sail from Owen Sound that time and never came again. For Mr. Julien, who saw the vessel at the very time the smaller pictures were taken, and who took larger pictures himself from his power cruiser Sunbeam, says that this was the last load of coal brought into Owen Sound by schooner, and that the trip "wrote finis to the history of wind-propelled shipping at this port." So the schooner probably never came back, light or loaded, and thus justified the somewhat ominous epitaph "never heard of again," although she did not disappear from service elsewhere for another five years.

To clear away all the mystery as soon as possible the schooner was the Horace L. Taber, of Kingston, and she was as old as the Dominion of Canada, although not a "Canadian bottom." She had been built at St. Clair, Mich., on the St. Clair River, in 1867 by Langell, and launched as the three-masted schooner Amoskeag, 133 feet long, 27 feet beam, 9 feet 3 in. depth of hold, 235 tons register. She wore the name Amoskeag for some years, probably sixteen, for her register notes that she had "large repairs" in 1883. It was probably in that year that she was re-christened the Horace Taber, and it may have been then that she was given her second centreboard.

In 1913 or 1914 Capt. Frank Barnhart, of Kingston, who had been in the schooners Pilot and Loretta Rooney and then gone into steam, bought the Horace Taber and transferred her to Canadian registry. He sailed her himself and she became well known around Kingston, in the coal trade and down the river, sometimes getting cargoes for Gananoque; but on the occasion mentioned by Mr. Julien—Aug. 15th, 1917, to be exact—-she had got a cargo for "up above," as we used to call everything north of Lake Erie, and was sailed by Capt. Peter McKinnon, of Goderich. Perhaps it was coal from Cleveland or Erie for Owen Sound, with the prospect of a freight down with cedar posts or lumber, which would make a profitable voyage. There was little money in carrying coal to Owen Sound from the lower lakes unless there was a return freight to help meet expenses. Mr. Julien describes the swan-song of Owen Sound's schooner trade thus:

"These two snaps were taken from the deck of my cruiser Sunbeam, Aug. 15th, 1917, there being just sufficient breeze to fill her sails and enable her to make weigh. A beautiful sight, inspiring to the heart of the true sailor. There she was all in her one-time raiment, resplendent, proudly pursuing the business of her owners as of yore. The snaps were taken about four miles down the bay late this sunny afternoon. The breeze dying down before reaching the inner harbor, she was towed up the river and warped to dock to unload her full cargo of coal. Was informed that the vessel had been out of commission for several years, tied to the dock in Chicago, which had not tended to improve her seaworthiness. In that respect it differed from wine. Was told she was over forty years old then, or nearer fifty."

Well, she was exactly fifty in 1917, and she looks it, with her stained sides, rusted with the preserving salt, her straightening sheer, and her misfitting gafftopsails. Not one of the three goes to where it is intended to set, either at the head or the foot; still she was glorious in that August sunlight, and Mr. Julien sympathetically caught the reflection of pride in the old-timer.

The Horace Taber — Mr. Julien says the name was painted as TABOR on this occasion, but it was TABER in the register and Taber on her stern when Schooner Days last saw her in Kingston, in 1921—-the Horace Taber had two centreboards, tandem fashion, thus making two slots in her keel. It would give efficiency in steering and in windward work, but certainly would not increase her strength; and in her last years she wriggled like an eel and worked like a basket. A Belleville filling-station man, who sailed in her in the last days, was telling about her peculiarities recently. When she had a load in her, and she was sunk with the weight of it amidships while lifted at each end by the buoyancy of her unoccupied spaces, she showed some sheer or curve in her profile, but her mizzen boom had to be topped up to clear the cabin trunk. In the pictures it looks pretty droopy, but seems to have been raised at both ends for clearance. Perhaps in 1917 she was not so weak and baskety as later. When she was "light," that is, after being unloaded, she would straighten out, the bow and stern sections sinking with their own weight, being no longer supported by the water. This would bring her cabin down, of course, and the boom would swing clear without the assistance of the topping lift.

Capt. Barnhart kept her smart-looking, however, and the last glimpse of her in Kingston showed her straight-sheered but brightly painted, black above and leadcolor below, red hawsepipes, white coveringboard and red beading. But no spritsail yard crossed her nosepole.

"What, no spritsail yard?"

That used to be the exclamation of every Canadian schoonerman the first time he set eyes upon an American vessel. It may be Greek, even to such sailing men as survive—-mostly yachtsmen—-and it certainly means little to the layman who would doubtless answer

"No, what spritsail yard?" If he knew how to say the last word. It was pronounced "spritsl" all in one piece.

The spritsail yard, as our lake schooners, even the littlest, used it, was a stout spar crossed under the jibboom at the end of the bowsprit. It had goosenecks on it to hold the jibboom guys and backropes and by extending these to a wider angle with the jibboom it gave that long spar more support. Sometimes, but not often, from the yardarms, or tips of the yard, gillguys led to the end of the dolphin striker, whose function was not to spear dolphins but to hold the jibboom down, against the upward tug of the jibstays. These gillguys prevented the dolphin striker from wobbling. You can see this picturesquely named spar in the pictures plainly, particularly above the boat of the Mary Daryaw.

American schooners seldom showed spritsail yards this century, and they had passed out of use on salt water before the century came in. Even famous clipper ship Dreadnought, built in 1853, did not sport one, according to her pictures. Americans found that carrying their jibboom guys back to the catheads gave them spread enough, so they discarded the spritsail yard altogether and saved worry, for it was a nuisance in crowded docks and had a horrid habit of tearing the jibs when the halliards were let go and the sails were struggling in the grip of the downhauls and gaskets.

A hundred and fifty years ago the spritsail yard was neither rigid nor "barren," as we call spars which are bare of sails. It had its own sail, and was moveable and trimmed with lifts and braces. The spritsail was ran important square sail in the old regime, and the poor old Guerriere tried to drag herself out of the raking fire of the Constitution, in 1812, when all her masts were shot away, by setting the spritsail under her bowsprit.

All square riggers then had spritsails, and some sloops and schooners used them, but it was a sail that never prospered with the fore-and-aft rig. Originally it was all a square rigger had to keep her out of the wind, in the days before jibs were used.

It is curious that it should have survived so long on the Great Lakes, and in Canadian schooners, when its only use was as a spreader for rigging for another spar which got on very well without it.

Even so, the pictures of the Horace Taber and of the Mary A. Daryaw—especially the latter— have a bald look to one long accustomed to the "whiskers" or spritsail yard under the jibboom. Both these vessels named were on the Canadian register for years, but they were launched and rigged in the U.S.A.

The end of November, 1922, was a tough time for such of the old lake schooners as had survived so long. There were still a few of them on Lake Ontario. In a blow on Nov. 27th, the Lyman Davis, later burned at Sunnyside, got ashore on Waupoos Island, at the back of Prince Edward County, on her way to Belleville with a cargo of coal from Oswego, and had to be lightered off by the Donnelly Wrecking Co. She was followed into South Bay by the Katie Eccles, also coal laden from Oswego. The Eccles let go under South Bay Point, leaking badly, dragged across to Timber Island and sank somewhere in the roadstead.

Two others made Four Mile Point on Simcoe Island, near Kingston, in a sinking condition. One was the Mary Daryaw, originally an American vessel named the Keewaunee, and very fast. She was already badly humped and warped with 40 years hard labor, and while her cargo was salvaged, all that was saved from the hull were her spars, which were cut up to make pine deckplanks for the Lyman Davis.

The fourth vessel was the Horace Taber, whose sinuous career, came to a full stop close beside the Mary Daryaw. She either filled and sank after letting go her anchors in the shelter under the point, or else ran on the shore in a sinking condition, and settled in water shallow enough to permit of the salvaging of her coal cargo. No lives were lost— except the Horace Taber's.

THE MARY A. DARYAW, another ex-American.

Threemasted schooner HORACE TABER, taken from the deck of L. C. JULIEN's yacht SUNBEAM, as she sailed into Owen Sound, Aug. 15th, 1917, with her skipper, Capt. Peter McKinnon, at the wheel. 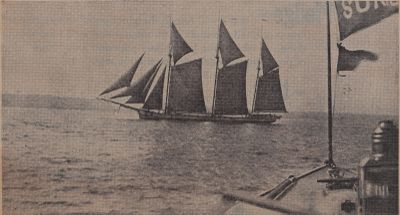