SCHOONER DAYS first acquaintance with Capt. John Williams dates back to 1889, in a way, for that was when Capt. Williams was in the Speedwell, and the Speedwell was the very first sailing vessel this recorder set eyes on. He set eyes on her as eagerly and as admiringly as Balboa on the Pacific Ocean.

Yet it may be stretching things to date an acquaintance thus, for the hero of these many lake experiences was invisible in his cabin when the small boy was admiring his ship. It was three years later, when Capt. Williams had graduated into his first three-'n'-after, the Sir C. T. Van Straubenzee of St. Catharines, long as her name, that we first came face to face. The abiding picture is of a man in his mid-thirties, medium sized, sharp as a whip and active as a cat, despite a recent foot injury. Merry little grey eyes, face red with sunburn, and a moustache that might have been made of gold wire.

His immediate activity was heaving a thousand tons of coal and schooner around the corner of a wharf into the narrow old waterworks slip at the foot of John street, against the back push of a brisk southwest wind. All he had for the purpose was his own two hands, and the ten more hands of four men and a mate; plus his own nimble brain. This was before the days of donkey engines, steam capstans, and wire hawsers.

The Straubenzee, lying east and west, had been laboriously hauled ahead until her bows were across the narrow slip which lay north and south. This was done by carrying a big rope to a spile on the far side of the slip and winding in the end of it around the schooner's capstan, which was revolved by thrusting handspikes into its head and pushing on them, inch by inch.

When the schooner had thus got as far to the westward as the farther wall of the slip, the trudge around the capstan ended, and all hands went to setting the four triangular jibs that hung on her bowsprit and jibboom, projecting fifty feet ahead. These were large sails of heavy canvas, measuring as much as sixty feet in the hoist, and two or three men were required to haul each one up and sheet it home. After all this sail was trimmed to the wind, and another hawser was run up the dock, they proceeded to break her around the corner with the assistance of the straining headsails and still more straining at the capstan bars.

With every inch the pressure of the four sails was levering her head more and more into the slip. Johnny Williams was here, there, and everywhere, not only shouting when to heave, and how, and where, but doing more work himself than he called on others to do. His encouragements ran something like this:

At last she broke around and surged into the slip of her own accord. They ran the jibs down quickly, and cheeked her with the after snub before she poked her jibboom into the long wooden ramp to the upper story of the coal shed at the head of the wharf.

We've already told the story of the Straubenzee's earlier auction, when she was up for sale for debt, and Johnny Williams' brother, David, unrecognized and supposed to be an east shore grainbuyer from Lake Huron, put in the deciding bid and got the ship for Johnny and for Medlar and Arnot. They wanted him to sail her and no one else. He was not keen on taking over the Straubenzee, with eighteen years of hard luck and hard usage astern of her, her outfit mostly gone, and the marks in her bottom where she had lain all winter on the north shore of Lake Superior when the C.P.R. was being built, and more marks where she had ground in the stones of Georgian Bay. He already had the Speedwell on his hands, and the W. Y. Emery, which he and his partner, Capt. Alex Ure, had rebuilt. To command a three-masted schooner was the ambition of every lake sailor who ever handled fore-and-aft canvas, and especially of boys who graduated from little stonehookers like the Rover, as Johnny Williams had, twenty-five years before. Yet he only took on the Straubenzee because Peter Arnot wanted him to do so.

Peter Arnot, honest yardmaster, wanted Johnny in the Straubenzee to keep someone else out. This was squaring the yards for a $1,200 bill which Medlar and Arnot had never been able to collect for work they did for this somebody, in the schooner Guelph. There was also another bit of healthy rivalry with J. T. Mathews, of the Mathews Line of schooners and propellers, who claimed a pretty good grip on the coal trade into Toronto by vessel, and was always on the lookout for a bargain. He was the principal bidder against the unknown Dave, raising it by tens. Capt. John was a silent spectator. He had told Dave to stop bidding if he got up and went out. He sat still.

"Try him with a $200 crack and see how he'll take it!" one of the crowd had shouted. Mr. Mathews replied confidently.

When Dave covered the next ten dollar bid Mr. Mathews was silent and the auctioneer knocked her down, adding hurriedly-—"I don't know this gentleman—-what name, please?"

"You'll soon know it better," shouted a voice from the back as Dave modestly said, "A. D. Williams," and produced the certified cheque.

The papers were all made out in his name. He pointed out to his co-owners that as things stood they had no title at all to the vessel, although they had paid more than he had. He couldn't afford to buy more than half of her, even after straightening out his partnership with Capt. Ure in the two other vessels. He had taken the Speedwell and put someone in her to sail her and given Capt. Ure the W. Y. Emery. He could pay another $500 on the Straubenzee to bring his share up to half.

"That as far as your conscience will stretch?" asked Peter Arnot.

"Well," said John, "you know what we've put into her, and I'd be willing to take the same from you."

Peter Arnot turned to his bookkeeper, told him to do certain things, and came back to Capt. Williams.

"Have you a dollar on you, Johnny?" he asked.

"Sure," said he, passing the bill over the counter, thinking it was for cigars.

In return Peter Arnot handed him a certificate of ownership of 32 shares in the schooner Sir C. T. Van Straubenzee of St. Catharines, her boats, guns, tackling, apparel and furniture. There are sixty-four shares, no more and no less, in every ship. For one dollar, not five hundred, Capt. Williams had become a fifty-fifty partner. Peter Arnot was like that.

"When I think of the fine treatment I've had all my life, from my partners, my employers, and the men who have worked for me—-" repeats Capt. Williams, this month on the edge of his eighty-fifth year.

Next week, his first trip in the Straubenzee.

A THREE 'N' AFTER LIKE THE STRAUBENZEE STRIKING HER FLY FOR THE TUG - From a Christmas sketch by a good friend of Schooner Days, Loudon G. Wilson, of Royal Oak, Mich. 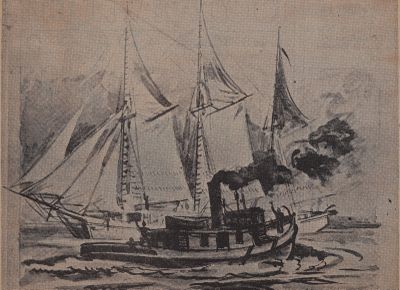