ON FAITH in Medlar and Arnot, who wanted him to sail the vessel, Capt. John Williams bought the schooner Sir C. T. Van Straubenzee for them and took shares in her in the winter of 1891-92. Equally on faith he went about getting business for her. When she was auctioned off she was frozen in on the west side of Church street slip, beside the yard of the Western Ontario Coal Co., a prospective customer. But he had heard J. T. Mathews claim to control the coal trade, and he expected no favors. He had a disputed account with that shipowner, over damage the steam-barge Niagara did to the Speedwell in the Welland Canal—-and brother Dave had cut the Straubenzee out, so to speak, under the ship-owner's nose.

"Mr. Brown," he said to the manager of the Western Ontario, "I'm told I can't get a load of coal for you."

"Who says so?" demanded Manager Brown.

"Sure. As soon as you can get it up here from Charlotte."

"And if I get a load of lumber, say for Oswego, could I load your coal there, to save me having to go up to Charlotte for it?"

"Sure," said Mr. Brown, an Oswego man himself. "You take your vessel where you can get a freight, captain, and pick up coal for us when and where you can."

Capt. Williams left the office with a light heart, and work for the Straubenzee for the first month at least in prospect.

Toronto Bay was still locked fast in the grip of winter, but there was a lane of open water almost from Church street slip to the Eastern Gap. The harbor buoys were not placed nor the lights lit.

Taking the helpful David from his winter work in the brickyards to act as mate, Capt. Williams rounded up a cook and crew, boiled every stitch of bed-clothing on board the Straubenzee and hung it up to dry in the crisp March air, and proceeded to fit out.

She was short of everything, after years of towing and being laid up, and being ashore, and her gaunt sides were bare of paint. Once she had had square topsails, but all the yards were gone now, and she had no tophamper. She had a new flying jib, but that too was missing. There was not even a compass aboard, and he couldn't find a second-hand one in Toronto.

But the lane of water spread right to the slip, and the wind came fair, so out the Straubenzee poked her bare jibboom at three o'clock one afternoon and started down the lake. He had sailed to Charlotte often enough to go there by a stern range from Toronto.

By the time it fell dark they were out of sight of land, so the stern range failed. But he steered by the stars, with a fresh north-west breeze, and by and by a red glow to the southward told him the old blast furnaces at the mouth of the Genesee were on the job. That was the best night mark for Charlotte, better than a lighthouse.

What he would have done if a March snowstorm had blotted out lake and land he did not think about till fifty years afterwards.

By daylight he sailed into Charlotte, up the river, and loaded his coal. He got out that night, with all the lake to play in. The wind came from the eastward, and brought him up to Toronto Point by next day. He rounded the lighthouse and came to an anchor under the lee of the island. The east wind blew the ice out of the bay, and next morning he hove up and towed in, with the first cargo of coal for the season-—and the Straubenzee had earned $300 for her new ownership. He would have got still another harbormaster's hat for still another first arrival, his specialty in the Greenwood and the Speedwell, but the stonehooker White Oak had come in from Port Credit with a jag of stone on March 29th, beating him by a few hours.

He was not long in getting the Straubenzee into something more like her proper style. He bought a compass, of course, and another flying jib, and gafftopsail, and a squaresail yard, and double raffee, and a maintopmast staysail. She was not fast by nature, but she no longer suffered from shorn wings. And he painted her spars white and her sides black, down to the thick-work of her planking, four strakes below the coveringboard, and then good red-lead and venetian, down to her light watermark. Covering-board white, rail green, bulwarks light blue inside, and a nice line of yellow beading breaking the black outside; deck red, house white, with green shutters for the cabin windows; and if we remember rightly, the chamfered oak corner posts of the cabin were varnished bright.

When bills had to be paid and freights divided, Capt. Williams got 'more light on his darkness as to his owners. The obliging Mr. Brown, who had so heartened him by giving him his first contract on generous terms, may have been laughing a little at his zeal, for it appeared that he or his firm was a silent partner. Just how much he had chipped in, Capt. Williams never learned because he never asked, for he had his own thirty-two shares and his wages as master, and was well content. He was working with honorable people. The Western Ontario Coal Co. was not a registered owner or shareholder, but when Mr. Brown had to go to Oswego, Peter Arnot paid him whatever his share was.

The Straubenzee had even strongly-built, for the timber trade, and she was tight as a bottle for all the buffeting she had had. John Willians sailed her for nine seasons before he had her out on the dry dock to put the calking irons to her.

"And that," he confesses, "was another of my follies of youth." Time caught up to him one hard day working up the lake with a cargo of coal, and crowding her so as to get into the lee of the north shore as soon as possible. She began to leak as fast as the two pumps and the steam syphon could take the water out of he; faster, for when she made port the water stood high among the coal. They had to keep the pumps going while she was unlading, and they had got her to the dry dock with the water three feet deep in the hold, so much of it that it was with difficulty that she was straightened up, and they had to bore holes from the outside to drain it out.

When they examined her they found all the oakum next the keep and garboards soft and falling out of her; then a four-foot band where it was hard as the day it was horsed into the seams; and then out towards the bilges another soft belt. Re-caulking was long overdue. They drove in plugs when all the water was out, through-nailed them, and cut them off level with the planking. She had been strongly built and was as strong as ever. Heavy white oak planks, four inches thick, next the garboards; then heavier stuff, fifteen inches wide; and still heavier, running up to seven inches in thickness, but not so wide, out to the turn of the bilges. Then four-inch plank, whee the sides got the strength of planks on edge, carried up to the five-inch thick strakes which stiffened her towards the covering-board. A whole forest of white oak, hard as iron after a quarter of a century's picking, for she had well salted before launching.

Where she had ground on the rocks the bottom showed old scars, and thee was one patch of heavy think plank as wide as a kitchen floor, where a replacement had been made.

END OF A GOOD SEASON -The Straubenzee drying sails, preliminary to laying up for the winter at the Adamson elevator at the foot of West Market street forty-seven years ago. 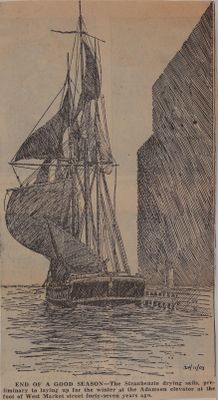