Full Text
After the "Idaho" Went Down
Schooner Days CCCCLXXXVI (486)

TUESDAY morning after the blow of Guy Fawkes' Friday, Nov. 5th, 1897, which put the Idaho down with nineteen of her crew on Lake Erie, Joseph Williams, Sr., ex-color sergeant in H.M. 100th Regiment of Foot, and father of Capt. John, hurried to his son's house in Toronto as fast as his feet would march him. Johnny was master of the schooner Sir C. T. Van Straubenzee, which had left port the same day as the Idaho.

In one hand the old gentleman gripped the morning paper. He could not open it, and it shook in his grasp. With the other hand he fumbled in vain for the doorbell. Though his fingers found it, he could not make himself ring it. While the old ex-soldier and ex-sailor swayed uncertainly on the doorstep, Mrs. Williams herself, John's bride in the Greenwood eleven years before, smiling: and bright as the crisp November morning, flung the door open wide.

"Come in, father, come in," she cried with animation. "It's nice to see you so early in the day."

"This morning," said Mrs. Williams happily. "The telegraph boy" just left. His message says, 'Well. Finish loading by noon and clear for Port Colborne. Love. He's still in Cleveland, for that's where the message was filed today. Here it is.

Joseph Williams' hand gripping the newspaper suddenly relaxed The paper fell to the floor unheeded. He stared at the telegram, clear ed his throat, shouted "WELL-I-MUST-BE-GETTING-ALONG" and backed out of the hall and down the steps. In so doing he bumped into the milk boy, who was crying over his bottles.

"Mind what you're doing, my young cockolorum," hailed old Mr. Williams gaily. "That milk of yours has been watered enough already!"

The lad deposited the Williams milk inside the door like one laying a wreath on the cenotaph, and followed the old gentleman, sniffling "Poor Captain, poor Captain Williams." But the old gentleman was too far ahead and too happy to hear him.

"Folks do act strangely today," said Mrs. Williams, picking up the paper and the milk bottle.

She laid the first, still folded the newspaper rack and busied herself with seeing that little May took plenty of milk with her porridge before starting for school.

Then there was the housework and lunch to get, and tidying up and so on, and May was back from school and the short day almost over, when a neighbor ran in, evening paper under her arm and her apron to her eyes.

"Oh, Mrs. Williams, isn't it dreadful! Have you seen to-night's paper?" she wailed.

Mrs. Williams hadn't. She looked at it, went white as a sheet and red as a rose again, and laughed happily.

"Johnny is so thoughtful," said she. "If he hadn't sent that telegram I might have been frightened. The paper's all wrong."

"But the morning paper said so too," said the neighbor, clinging to her self-appointed role of crape hanger.

"Did it?" said Mrs. Williams. "Father-in-law left one this morning but I've been too busy to read it. Let's see."

The story was the same in both papers—-neither of which was The Telegram, it is hardly necessary to state. Paraphrased by the headlines it ran — "LAKE ERIE CLAIMS SEVEN MORE LIVES—SCHOONER STRAUBENZEE BELIEVED VICTIM OF LAST WEEK'S GALE - NOT HEARD FROM SINCE LEAVING PORT COLBORNE FRIDAY." It was a Buffalo yarn. It went on to say that the steam barge Van Allen, arriving on Monday, had seen nothing of the Straubenzee on Lake Erie.

"You see," said Mrs. Williams composedly, "Johnny couldn't have sent this message from Cleveland this morning if he wasn't there with the schooner to send it. Father-in-law might have believed the story when he came—-but he didn't believe it enough to even mention it when he saw Johnny's telegram-—and that too, must have been why the poor milk boy was crying."

Even the neighbor was convinced, though reluctantly. Some people are disappointed when they can't spread their sympathy.

AGAIN we go back to the 'Benzy, as the boys used to call the Sir C. T. Van Straubenzee of St. Catharines.

All day that Saturday, which had proved fatal to the steamer Idaho and her crew of nineteen, she lay under Long Point in the stormbound fleet, while the gale blew itself out. Sunday morning she got under weigh, in air so light she just steered comfortably, and Capt. Williams jogged along, taking soundings as he came around the Point, so that another time he would know just what offing he had to give it. He found plenty of water for the Straubenzee much closer in than he expected. His centreboard, lowered half-way, would have kept him out of trouble if his leadline had failed.

After getting well out into the lake he spied something on the weather bow just awash, and let her range up to it gently. The raging lake of the day before had calmed down to a gentle roll. Lake Erie is like that. It is shallow, and the seas make quickly and die quickly.

What he had sighted was a square-sterned boat of some kind, floating bottom upward.

Frank Blanchard went over the side in a bowline and stepped on the keel of it, near the sharp of the bow. Skilfully throwing his weight against it he gave it 'a flip and over the 16-foot craft rolled, turning right side up and full of water, but quite recognizable. It was a lifeboat. The ! name was plain on the bow—-Idaho No. 1. There were no bodies in it. The curious thing was that its oars, blocks, tacklefalls, painter, etc., were all in position. Seemingly the boat had been on the davits, gone down with the ship, capsized with the rush of water, and disengaged itself neatly and floated to the surface bottom upward.

No one in the Straubenzee knew, at this time, what had happened to the Idaho. It looked as though this boat had been swept from her deck. They hoisted it on board and carried it to Cleveland. There they heard the story. News reached sailors slowly forty years ago, newspaper circulation not covering the waterfront very thoroughly. Johnny had, as a good husband, telegraphed his wife as soon as he knew when he could sail for home without knowing what had happened to the Idaho, except that she had lost a boat.

Capt. Williams brought the boat he had picked up back with him to Port Colborne, which was nearest to the Idaho's home port, Buffalo, and there communicated with her agent. The agent said they would be glad to pay any charges on it, if the Straubenzee were bound to Buffalo, but they had no means of getting it from a foreign port, which Port Colborne was.

Capt. Williams said he would like to have $10 for the trouble his crew had been to, for Frank got his feet wet and they all worked hard bailing the boat out and hoisting it on board. A man in Port Colborne offered him that for it. He said he would deliver it in Buffalo for $2.50. Capt. Williams was bound for Hamilton and Toronto with his cargo of moulding sand so left the boat on the dock in Port Colborne for the owners to claim.

They hadn't done anything about it next July, when Capt. Williams was again passing through the canal, so he hoisted the boat aboard the Straubenzee again and brought it on to Toronto and hauled it out at Medlar and Arnot's yard. A plank in the port bow had been split and the transom cracked; that was all the damage to it. He re-placed that, scraped and repainted the boat, and swung it on the stern davits of the Straubenzee for the rest of her life. Her original yawl boat he sold to Capt. Wakeley, who needed one for the S. H. Dunn. It is curious if the Idaho's lifeboat ended its days in Lake Erie, close to where the parent vessel went down, for after Capt. Williams sold her, the Straubenzee was sunk in collision not so very far from where the Idaho foundered. She carried her yawl boat and captain and half her crew down with her.

Sir,—Have just read your very interesting account of the loss of the Idaho in Lake Erie, Nov. 3, 1897.

I have been duck shooting on the Long Point Bay for the past forty-seven years, and on the 6th of Nov. (Saturday) the late C. K. Rogers and myself were standing on the verandah of Ocean House Hotel, and Rogers said to me, "What is that steamer doing out there in the lake?"

She would come up against the weather, and then would pay away only to come up again. She did this act repeatedly. We found out the next day it was the Mariposa, picking those men off the spar of the sunken steamer Idaho. We couldn't see the mast sticking up out of the water so far away.

The Idaho drowned nineteen of her crew. She should have gone under the Point as she was an old boat rebuilt and had arches and bilge planks to brace her up.

Knew one of the Williams (Tom) intimately. He sailed a boat up to Port Rowan for Dick Tinning some years ago. Hope to read a lot more of your articles. Yours truly,

THE IDAHO'S LIFEBOAT when brought back to Toronto the year after she was lost. 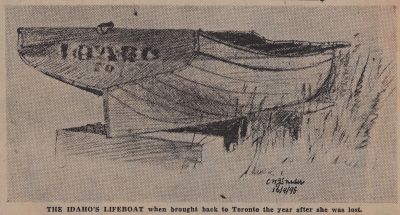