WITHIN sight of Cobourg at dusk on December 2nd, 1902, Capt. Jan Williams was still doubtful whether he could get in even this time with the Straubenzee. It was his third attempt with this cargo of coal. The little group of dim street lights neither lighted the way in nor allowed the dimmer range lights for the entrance to show up.

It was blowing up for night, and he was of half a mind to run on up to an anchorage under Toronto Point; but he couldn't get it out of his head that the Jessie Drummond was somewhere astern of him, with a cargo of coal for Cobourg, too.

Taking his binoculars he went forward, and from the fore-rigging peered into the murk. In the enlargement of the two circles he saw that the Straubenzee was looking right into the piers.

"Steady as you go!" he called to the man at the wheel. "And take a compass bearing. She's heading right in now."

"Ain't yet got a lot of sail on her, cap? Asked one of the Blanchard boys. "There's not much room inside.

With that much heads she could not swing back when the wheel was put down, and she gently slowed up on the sand to leeward - safe at her destination on the third try.

It was no trouble to get the boat down and run lines to the two piers, to heave her off the soft bottom. While they were doing this in the rain, one of the boys called, "Look, look, a vessel's coming," and Capt. Williams glimpsed the red port light of a schooner heading to the eastward of the pier ends.

"Bring our sidelights back where they'll show, and burn the torch so he'll know where we are!" called Capt. Williams.

As he spoke the red light showed past the pier, outside the harbor entrance, and immediately he heard a grinding roar and a crunch, and a crunch, as one anchor after another was let go.

There was a tumult of shouting voices and the thunder of flogging sails and banging of blocks, for the newcomer had plenty of sail on. The anchors tripped her, and held her clear of the pier and the beach. Soon the clank-clank-clank of her donkey engine and windlass pauls announced that she was heaving up her hooks to try again for the entrance.

But alas for her! Before she could gather headway the tumble of sea and the rising wind swung her till she went broadside in and grounded on the beach to the eastward of the harbor.

The lifesaving station at Cobourg was alert. Before the Straubenzee was hauled to her own berth, Capt. Dan Rooney with the harbor lifeboat was out and alongside the stranger to see if the crew wanted to be taken off. Their first trip they only got the cook, a Mrs. Redmond of Toronto. Capt. Williams made her comfortable with the Straubenzee's cook. Soon afterwards the skipper of the stranded vessel, dripping like a foundation, with his whole wet and half-frozen crew stood at the Straubenzee's cabin door.

He was Capt. Jas. Quinn, of Oakville, with Jim Markey, of Cobourg, his mate, and Arthur Thomas and Pat Joyce, of Oswego, and Tom Collins and Frank Eckert, of Toronto, foremast hands; for the stranger pounding her heart out there in the darkness was the Jessie Drummond, bound, like the Straubenzee, to Cobourg with a cargo of coal at a good freight but, unlike the Straubenzee, a cargo of coal she would never deliver, and a good freight she would never collect. For this was the end of the Jessie Drummond, to perish within a hundred yards of safety on Lake Ontario, after outrunning a thousand-mile gale and crossing the Atlantic Ocean twice and braving the port perils of Hamburg and the tides of the English Channel, and the North Sea.

Capt. Quinn at this moment did not believe that it was the end. He was loud in his protests at being plucked from his vessel by the life-savers, he was wroth at the pumping station light which had been taken for the pierhead light. He was certain his ship would have gone out again to safety when the anchors tripped her, if it had not been for the flaw of wind and sea setting her in. He would telephone Toronto and Oakville, and the Donnelly Wrecking Company at Kingston as soon as he got his boys in out of the cold and wet. Lightering a few hundred tons of coal and a few jerks from the tug would surely free the Drummond as soon as the weather permitted.

The Straubenzee put some of the crew up, and others were berthed in Cobourg hotels.

Daylight showed the Drummond still intact, with the seas still pounding her. But her three masts were slanting in three different directions, showing that her hull, strapped with iron thirty-eight years before, was warping and twisting under ceaseless assaults of the breakers. The coal in her was already crashing up on the beach. It was plain that in trying to save her life she had lost it. By sagging in broadside she presented a long, flat flank for their back-breaking, rib-smashing attack. Ironically the wind shifted with daylight and blew great guns down the lake, making a smooth in the lee of the pier which the Drummond had just missed. Had she driven in head on to the beach, beside the pier, she might have taken the pounding on her stern without serious damage, and she would have been snug when the wind shifted. Yet Capt. Quinn had done what most men would have done, in giving her the anchors to save her. He realized the tug and steampump would not be needed. The Drummond would be firewood in a few hours; she was already past saving. And there was no insurance on her.

Shortening Down for Cobourg

LEAVING OSWEGO FOR COBOURG. THE Jessie Drummond as Captain Quinn had her.

SCHOONER SAILING HAS KEPT HIM YOUNG.

An old acquaintance of Schooner Days, CAPT. R. J. EDMUNDS, of Port Hope, last week commemorated his 50th anniversary of his initiation into Hope Lodge, A.F. and A.M., with a cake with 50 candles 'n everything. Here are a few interesting things he could tell the brethren: WENT sailing at age of 12 in the topsail schooner ATLANTIC, owned by is father. At the age of 21 he was master of the schooner MARY ANN LYDON. Then the PICTON, ANNIE MINNES, AURORA, JESSIE DRUMMOND, L. D. BULLOCK, E. H. RUTHERFORD, W. Y. EMERY and SPEEDWELL. He sailed the lakes for 40 years. Capt. Edmunds is still hale and hearty at 83. 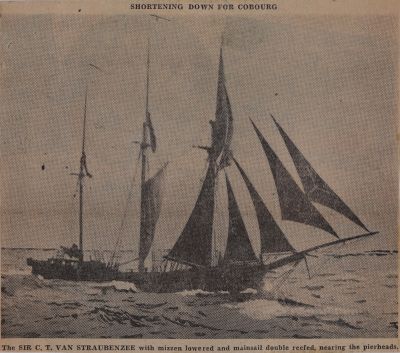