SKIPPERS were rough and tough on the lakes ninety years ago, Alfred Burritt found. He so reported without bitterness, to his son, sixty years later.

The son, "Red Paddle" in verse, but also christened Alfred Burritt, has been a well-known figure in the Department of Lands and Forests at the Parliament Buildings these many years. He was superannuated two years ago.

Young Alfred Burritt of 1853 did hot relish his prospects as apprentice to a waggonmaker and worked hjs way to Port Hope and Bowmanville and Port Darlington, looking for a chance to earn his living by sailing. He found it difficult to persuade a captain to hire a greenhorn. They all wanted experienced men.

The captain of the Duke of Darlington promised him a "site." He went home to get his clothes. When he got back to Port Darlington there was no Duke there. The captain, getting a fair wind, had sailed short-handed rather than wait. Neither he nor his vessel was ever heard of again. It wasn't a judgment on him for leaving Alf Burritt standing. Just a fact.

On a Saturday in another vessel in which he later worked for two months they made the Welland Canal, bound down from Lake Erie with Crimean War corn. They did not get far before the canal closed for Sunday, which was strictly observed on the Welland up to the time of the Great War. Only in the grain rush at the end of the year were the locks ever filled on the Sabbath. This Sunday Alf improved, with one of his shipmates, by driving over to see Niagara Falls, while the schooner snuggled the canal bank. Getting back in good time for supper the mate—a new one—broke the news that the cook had been fired during their absence. The captain, he said, had ordered Alf to cook supper in his place.

"But," objected Alf, "I don't even know how to make a cup of tea. I'd willingly cook the meal if I could, but I know I'll make a mess of it."

A minute later the captain himself banged on the forescuttle.

"You young devil!" he roared. "Refuse duty, will ye? I'll show ye. Out of this ship this very instant, or I'll put the boots to ye!"

Amazed at the sudden change in the manner of the man whom he had thought he was suiting well, young Alf gulped and said: "All right. Give me my money and I'll pack my bag right now."

"You'll get neither money nor bag from this ship. Over the side with you, and if you don't take the towpath one I'll help you to the other."

Young Alf reluctantly climbed over the rail. At dark his shipmates tossed him his clothes, and he got a berth in the Shickluna — the schooner Louis Shickluna built in 1847 and called after himself, not the propeller of the same name he built years later for Sylvester Brothers. After two months in her he landed in Toronto, rode and walked to the Georgian Bay, Owen Sound, and the Saugeen, and went into pilotage and small-boat freighting to Parry Sound and all along the north shore to Manitoulin. He did well at that, and on Lake Nipissing.

But he never got his two months pay. It was a trick more than one skipper had, in the days of five-point law on the lakes; the points being the five fingers of a hard fist, and five toes of a sea boot.

Alf Burritt I. was born at Burritt's Rapids on the Rideau, of United Empire Loyalist stock, in 1835. When he was eighteen he wanted to go sailing, and he went. His first berth was with Capt. Jack White, in the schooner Perry, owned by Peter Perry, trading between Port Hope and Frenchman's Bay and Port Whitby and Oswego, with flour and lumber. The Perry was small, and, having found his lake legs, young Alf looked for something more of man's size, though he still only rated as a boy.

So later in the summer of 1854 he found a berth in the fore-and-aft schooner Ann Jane Brown of Port Hope, Capt. Wm. Manson master and part owner. She was not a large vessel—rated at 100 tons in a list of 1856—but she traded all the way from Toledo on Lake Erie to Ogdensburg and Prescott down the St. Lawrence.

In December, 1854, she loaded a mixed cargo, including high wines, fish and iron rails for the new Grand Trunk, then building. The rails were to be delivered at Cobourg and Port Hope, like the Straubenzee's cargo of coal, about which we had a story lately. In the 1850's, while railways were yet only running on paper, the schooners did most of the freighting along the shores of Lake Ontario, and "general merchandise," from tombstones to Leghorn hats, was as common as were bulk cargoes.

This Ann Jane Brown was one of the early vessels of the fleet William Marsh accumulated, based on Port Britain at the mouth of Marsh's Creek, three miles west of Port Hope. Capt. Manson was a builder as well as a shipmaster, and it may be that he built the Ann Jane Brown for the King of Port Britain, and took a share in her for his payment; or possibly William Marsh followed the prevalent custom of selling a share in his vessel to the master, in order to secure his services and stimulate his interest in making the vessel profitable. The schooner was probably named after one of William's many sisters, who had married J. G. Brown of Port Hope, or possibly after their daughter. His brother-in-law, who lived in Port Hope, was also a part owner. She was trading into Port Whitby as early as 1845.

That the vessel was an old-timer, even in 1853, is proved by the fact that she had a standing keel and no centreboard. This last very useful contrivance was a feature of lake schooners from the middle of the nineteenth century onwards. Port Hope had more than one standing-keel surviving at this time, among them the little Acorn, and the larger Anna Craig. The limitations on draught imposed by lake harbors, few of which gave as much as ten feet, made standing keelers either poor carriers or poor sailers. If they were sharp enough to sail well on their limited draught their could carry little cargo for their dimensions. If they got a big load downstairs they were blunt and slid to leeward when they hauled on the wind. After 1850, 99 out of every 100 schooners on the lakes had centreboards, many of them added after their building.

What the Ann Jane Brown was like we do not know, but we can give Alfred Burritt's adventures with the fish, high wines and railroad iron next week.

"BED PADDLE" AND HIS CANOE 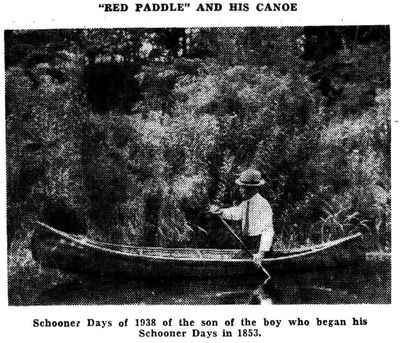