HERE may be a clue as to the identity of the smart schooner Charlie Gibbons drew so long ago, with the name "MARQUIS OF LORNE" blazing on her burgee and quarters.

It may be remembered that Schooner Days applied for information regarding this vessel, both in the Dominion registers and among old-timers who might be expected to remember her, and drew a blank, except that the late Capt. Frank Jackman was believed to have mentioned an American vessel being brought down from the Upper Lakes and so renamed.

Capt. John Williams, our old reliable, looked the picture over and thought hard. While he thought the tune of the old lake ballad quoted above ran through his head. He hummed it unconsciously.

"What is that?" asked Schooner Days.

"Oh, it's a rhyme they made up about the schooner Fayette Brown sixty years ago. There was a sailors' strike on the lakes, and the Fayette Brown hired a negro crew. Lots of negroes make good sailors, and we used to have some out of Bronte, because that was a terminus of the underground railway in slavery days. But an all-black crew was a novelty never before tried, and the strikers made up rhymes about how the poor darkies would suffer in the fall of the year, when good men are most needed on the lakes.

"What put that into my head is that this picture looks like the Fayette Brown.

"I remember well seeing her in Lake Erie, and admiring her. She had the same sweeping sheer as this one, the same raking stem, the same single square topsail, with a reef in it and batwings above, and the same jaunty rake to her masts. Of course, there were other vessels so rigged, but the vessel in the picture looks to me to be of larger than full canal size, and that also applies to the Fayette Brown. Our Canadian canal size vessels were usually plumb-stemmed, to fit the locks better, but this vessel, as you can see, has a fine bold sweeping bow, and that was the style of the American vessels, too large to go through the old Welland Canal anyway, and therefore given enough overhang to make them look well and sail well. We had to confine such trimmings to schooners of smaller size, until the canal was enlarged. After the 14-foot canal went through we had American vessels on Lake Ontario from Lake Erie and the Upper Lakes that we had never seen before. It may be that this Marquis of Lorne was one of these, and if so it may well be be that she was the Fayette Brown, renamed."

If so, the renaming didn't take. Seemingly this handsome "Marquis of Lorne" was not so named long enough to get recorded in the printed annual register of Dominion shipping. It happened frequently that an American vessel changed her name and became Canadian and then reverted to American registry and, sometimes, to her old name. The case of the American schooner Philo Scovil is one in point. She was changed over and became the Midland Rover. In a year or two she was again the Philo Scovil and on the American register again. At any rate the Fayette Brown was sailing under this, her original name, in 1891, when she was lost in Lake Erie. She was sunk in collision. She was then 23 years old, having been built in Cleveland, O., in 1868. She registered 538 tons, about 200 more than our canallers. If she was a "recovered wreck" bought by Canadians after 1891, it does not seem probable that they would then rename her "Marquis of Lorne," for although Lorne Park, Lorne street, etc., still testified to the popularity of the Lornes in the '90's we had by then had two new governors-general since the Marquis of Lorne and the Princess Louise had left Canada.

The beaver on the stemhead and the strong patriotic emphasis in the paint and flags of the pictured vessel suggest that she was contemporary with the coming of the Marquis of Lorne to Canada, which was in 1878. There was nothing to prevent a beaver figurehead being added to an American-built vessel; there was lots of room for it.

Here the case rests for the present. As said before, Schooner Days will welcome details about the "Marquis of Lorne" topsail schooner, Capt. Williams' suggestion is the most helpful one yet received.

BEFORE leaving the subject of the Marquis of Lorne in hope for more information on her, let the compiler of Schooner Days pay tribute to some of the sons of Ham he was shipmates with.

There was Nigger Charlie, no other name known, we had in the little Wood Duck, whose picture—the Wood Duck's—appears at the head of this article. Quiet as a mouse, strong as a horse, and patient as Job, strongest memory is his enduring ox-like strength as we towed the Wood Duck through the Eastern Gap together one bitter November night after she had taken the headgear out of her in a bout with the pierhead, coming in. It was a tough wrestle for half a mile against a headwind carrying sleet and a current running fast out of the Bay. When we neared the inner end of the piers, Charlie, who had been doing the heaviest part of the towing, said while the sweat froze on his moustache: "Iffen it 'ud ony freeze a mite more we could get down on de ice and tow her 'cross to de city."

Then there was Reginald Archibald, coal black Barbadian, mild mannered, but mighty as the Atlantic he sailed. First seen aboard the steamer Caraquet going out of St. John, N.B., in March, blue with cold like the song says, but a wiz with the mules, which formed our deck cargo; next master of his own schooner in the Caribbean; and last glimpsed aboard Betty Carstairs' three-masted schooner yacht at Newport, one of twelve white uniformed sailors, all as black as the sharps on the piano, and smart as the yacht's own paint.

Pushing up the Potaro to the Kiateur Fall in British Guiana I had a boat's crew of three East Indians, two Akawaios, one Carib and eight negroes, all good men, but the blacks best.

"Mac" was supposed to be colored, and so he was, but not in the way lost people meant it. He was a Caymanian, a native of Grand Cayman Island, near the Bahamas. Jarvis shipped him in the West Indies, on his trip to Jamaica with the Haswell, where he was mate of a turtle schooner. His grandfather was a Scot who had married a Carib woman and settled in the island.

Culrose was a magnificent young sailor, with high cheekbones, wide shoulders, slim waist and long legs. He would carry a 300-lb. barrel aboard without grunting. Once when our balloon jib sheet parted in a 20-knot breeze, he seized the clew of the slatting sail with his right hand, anchored himself to the lee rigging with his left, and acted as a human sheet until we had rove off another one of rope. When we had, it took four of us to trim down what he had held with one hand. Jarvis loved "Mac" and encouraged him to get mate's and master's papers, and got a job for him with Morgan, when he had to part with Venture. Capt. MacLaughlin is now commodore of a squadron of Morgan yachts—power boats, sailing yachts, houseboat and tenders, and is a highly respected—-and highly paid—-American citizen.

"I was quite surprised to see Red Paddle and his canoe make his appearance," writes Alf. Burritt, "but since he did so, I may say the tiny craft is 10 feet in length, 3 feet (beam across gunwale to gunwale amidship, weighs 35 pounds; Indian-made birch-bark canoe; came from Barry's Bay, on the Madawaska River; cost 90 cents freight charges to bring her to Toronto. The same one-man crew handles her each season."

PARTNER IN THE DRUMMOND

"I was deeply interested to see your account of the "Jessie Drummond" in the Saturday Telegram, March 29th. I have not been following up the "Schooner Days," as I have been away from home for several months. You may be interested to know that my father, the late Capt. James Wilson, of Bronte, was part owner with Capt. Jim Quinn. We have a large crayon picture of the Jessie Drummond and several other ships in which my father had an interest. You may have seen some "Sailor Poems," by E. Dee. That is the name under vhich I write, and sailor poems are my specialty, as I inherit my love of the Great Lakes from my father. I thought this bit of information might be of value to you, re my father's partnership in the Drummond." 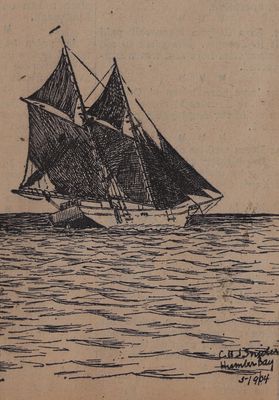