ON a Tuesday night in November, 1906, the 20th of the month, the steam barge Resolute with her consort, the barge P. B. Locke, in tow, came across from Port Dalhousie in an east wind and blowy weather. They had loaded coal in Erie, Pa., for the Toronto Electric Light Co. steam produced power plant at the foot of Scott street; for American coal was the basis on which wheels were turned and lamps lighted in Toronto thirty-five years ago.

The Resolute was a high-bowed wooden propeller of the type called a rabbit, because, with the weight of her engines in the stern she sat down on her tail when she had no cargo in the hold. She measured 421 gross tons and 212 net, and had 425 tons of coal aboard. She was built at Deseronto in 1883.

Her consort had been an American three-masted schooner, built in Toledo 1874. A year or two before this she had been brought to Toronto and cut down to barge rig. Haney and Miller, harbor contractors and operators of brickyards, quarries and cement works, owned these vessels and several others, and when they had no use for them in carrying their own cargoes put them to general freighting. "Cap" Sullivan, renowned Liberal worker, was commodore of the little fleet. Forty years in the hard school of schooner days, from horseboy to command of the finest of the "old canallers" and steam barges, made Capt. John Sullivan an ideal superintendent of any flotilla built of wood and iron.

Capt. Sullivan was aboard the Resolute when the pair approached Toronto, not as master but manager. He had gone with them to Erie, Capt. John Fahey was in charge of the Resolute, and Capt. Barney McIntyre of the Locke.

When they neared the Eastern Gap the sea was running so high that there was doubt about being able to enter. The schooner Reuben Doud had already been wrecked that year, jolting the rudder out of the gudgeons in the turmoil of water at this place. But the Resolute was leaking badly and they wanted to get shelter as quickly as possible, so resolved to try it. When within a hundred yards of the pier heads a great sea swept the steamer side-wise across the entrance, and she could not head up to it in time to get in herself and bring her barge in with her. So they let her run off before wind and sea, up the Island shore and around the lighthouse on Gibraltar Point.

Here the pair hauled into Humber Bay and the lee of the Western sandbar, where they found the three-masted schooner St. Louis riding at anchor. She, too, had been unable to make the Eastern Gap, although the schooner Van Straubenzee, so long sailed by Capt. John Williams, but at this time in the hands of Capt. Dolph Corson, had entered a few hours ahead of her.

At this time the Western Gap, giving access to Toronto Harbor at the old Queen's Wharf, was a dredged channel curving through what is now solid land north of Fleet street and the baseball stadium —about the site of the Loblaw warehouse and Rogers plant. One of the row of willow trees that grew on the north side of the channel still survives down there, but the old red lighthouse which stood at its lake-end has been moved south and west for a boulevard landmark. Where it now stands was then a semicircular bay, running in as far as the Old Fort. The Western Gap had been dredged down to hardpan, and 11 feet was all the depth that could be got. As the Resolute was drawing 11 feet 6 with the water in her, and her tow drew all of 11 feet, it was useless to try to get in by this channel. The steam barge and her tow both anchored near the St. Louis.

Twenty-four hours later the Resolute was a wreck, sunk in seven fathoms of water, with half of her crew drowned, and distress signals were flying from the St. Louis and the P. B. Locke. Their crews had been taken off by the lifeboat and they were in danger of dragging in on the beach and becoming wrecks like the Resolute, all because the western harbor entrance in 1906 was not deep enough to admit these vessels, and could not be deepened. The story of how the Resolute was wrecked and how her wreck brought about both a new harbor entrance and a new harbor will be told next week.

MORNING OF THE WRECK, with the lifeboat being towed out of the old Western Gap and the storm drums up for a heavy westerly gale. To the left, the ST. LOUIS, flying distress signal; ahead of her the P. B. LOCKE with table cloth at masthead; beyond her the RESOLUTE, sunk. —From a chalk-plate drawing made for The Telegram that day.

THE RESOLUTE (JOHN ROLPH) wintering near the foot of West Market street, years after her wreck and resurrection.

OLD RED LIGHT in its original position in 1917, after the old Western Channel had been filled in. 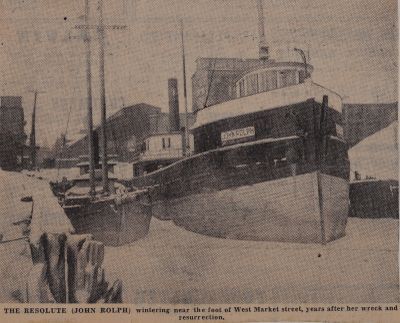 Morning of the wreck