[ was a Scots in Grey County money agane ] An old sailor, [ ] Capt. Jas. McCannel - told Schooner Days that Belle helped carry every plank Sandy McPhee, her father, ripped out of Sydenham Township oak and planed and bevelled and steamboxed when the schooner which bore her name was a-building in Owen Sound seventy years ago. It took father and daughter--and such carpenters, caulkers, blacksmiths and joiners as the former could occasionally secure--years to get the schooner finished, for she was a good burdensome little vessel, 85 feet long, 19 feet beam, and 8 feet 9 in the hold. She registered 108 tons and could carry 250 tons of coal. It was but just that Belle's name should blossom on her sternboard, for she had been nursemaid to the schooner from the day she was born on the keelblocks.

The Belle McPhee was launched in 1872, and in her first season she ventured down to Lake Ontario. Among some ancient "protests" seen through the kindness of Mrs. Egerton was one drawn by this lady's father, Edward Merrill, notary public in Picton, in Prince Edward County dated December 4th, 1872.

"Personally appeared before him," in the standard language of these marine documents, "Alexander McPhee, master of the Belle McPhee, of 108 tons burthen, of the port of Owen Sound, and brought with him George McDougall, mate on board of the said Belle McPhee, each of whom, by him duly sworn according to law, on their solemn oaths did depose, declare and say as follows" -

What does follow is a sound exposition of the difficult of lake navigation in the fall of the year, with no power but wind power and will power, in a vessel unable to move with her sails, unable to do more than run before the wind if crippled.

They had loaded coal in Little. Sodus, N.Y. (now Fairhaven) on the south side of Lake Ontario, for Toronto, which lay 135 miles west-by-north-3/8 north as the crow flies, if crows fly that way. They sailed out on a light southerly wind at 9 o'clock of a Sunday morning, the 24th of November. Capt. McPhee was a competent mariner, and he kept and used a logline, then rather a rarity in schooners on Lake Ontario. At 6 o'clock in the evening Charlotte lights were showing up broad on the weather bow, and the log gave 25 miles. The Belle was steering west by north, which, allowing for leeway, would bring her to Toronto in another 24 hours or less, if the light wind freshened. It did, and by 2 o'clock Monday morning she was up to the Devil's Nose, a headland on the south shore like the highest part of Scarborough Bluffs, and 75 miles southeast of Toronto.

But at 9, driving into the high sea, her two outer headsails, the jibtopsail and flying jib, split and had to be taken in, land an hour later the forestaysail went, leaving her no jibs at all and temporarily unmanageable. To keep her from broaching to they took the mainsail in altogether, to balance the loss of headsail, and reduced her to a close-reefed foresail, under which they ran back before the wind, throwing away mile after their hard won 84. Six more hours heading west by north could have brought them to Toronto, but eastwards was the only way she could go now, with the small sail she could carry.

The sea was too high to try for any of the lake ports to leeward, so they let her run for some natural harbor like Presqu'isle or South Bay. She made good weather of her reluctant retreat for the first hour, then in a heavy puff and the hard rolling the fore gaff, which held up the head of the reefed foresail, carried away. They lowered the sail altogether, stripped it from the broken gaff while she filled her decks with Lake Ontario spilling in from both sides, and then, up to their knees in the bitter cold water, hoisted up the throat or inner part of the sail again, and lashed down the peak or outer part of the head to the foreboom, to keep the sail from slatting to pieces.

Under this doubled triangle of remaining sail the Belle paid off before wind and wave, almost broaching to as the great seas rolling in ceaselessly from the west overtook and passed her. In the early dusk of November. That day they were abreast of Port Hope, but unable to even try to get in. By 8 o'clock Presqu'isle's tall lighthouse lifted its torch above the horizon, and after a while the Scotch Bonnet began to show, farther south and east.

At midnight the gale let go. By daylight on Nov. 26th the crippled Belle was abreast of Salmon Point, worst of Prince Edward County's limestone fangs; in fact, Wicked Point is its other name. The wind was now light from the west, and with the sea running down and daylight coming through they fished the broken fore-gaff, that is, put splints on it. They bent the spare jib in place of the lost fore staysail and sewed up the torn jibtopsail. By noon they had drifted down as far east as Point Peter, the extreme south of Prince Edward County, but the faint wind hauled to the east, a welcome quarter for the Belle, and they hoisted the foresail and mainsail and their jury jibs and steered west again for Toronto, rejoicing.

For two hours only. At 2 p.m., the wind chopped to the southwest, blowing fresh, with snow. Nothing for it but to turn tail and try for shelter in South Bay, on the far side of Prince Edward. South Bay is a large indentation opening to the east, It is marked as Prince Edward Bay on present charts, South Bay being reserved for the post office at its innermost corner. Its southern bound is Point Traverse (modernly dubbed Prince Edward Point, but South Bay Point to the ancients), and its northern the bold Napoleonic profile of Cape Versey or Vesey (both on the charts), known locally as The Bluff.

At 3 o'clock the wind backed to south by east, so around they came to the Toronto course again, west by south. Capt McPhee had taken in his log during the gale. He now set it again, and at 3.20 noted that Wicked Point bore north by east, a little astern. Thank Heaven, that peril was once more past! But—

"When the wind shifts

By dark—5.30—the-wind had drawn ahead again and the sea was coming in heavily from the south. Wearily the Belle McPhee took in her log and headed east again towards South Bay. But at 8 o'clock there was another shift, to the north, cold and light but fair for Toronto. West again the Belle headed, streaming her log at 8.30. Wicked Point now bore due north — not yet astern, but abeam. When the watch was changed at midnight the log showed the light north wind had given 6 3/4 miles progress in three hours and a half. It held light all night. Had the gafftopsails not been torn beyond resetting the Belle would have made fair progress, but when the north wind died with the coming of daylight on Nov. 27th she had not much more than 10 miles to show on her log and Toronto was still a hundred miles away.

A new wind came in from the south, light at first, shifting to southwest and blowing heavy. For the third time they turned back for South Bay. Close reefing the mainsail and settling the foresail down to help the fished gaff. This was at 10.30 a.m. At 2 p.m., snow squall succeeding snow squall, the heavy sea stove in the bulwarks and made clean sweep of the vessel, washing overboard all her heavy canal lines and other gear. They got a bearing on the Scotch Bonnet - due north - in a clearing, while they were stowing the reefed mainsail. In a heavy snow squall following the rudder post was sprung, and the vessel failed to answer her helm and fell off so far, having no after canvas set, that she jibed the foresail, or what of it had been left hoisted. That is, it was thrown violently from one side of the ship to the other by the wind. The fished gaff held, but the heavier fore boom, extending the foot of the sail, snapped at the jaws which, held it to the mast.

This looked like complete destruction of the sail, but with great difficulty one end of the outboard piece of the boom was secured and lashed to the starboard end of the windlass in the bows, and a preventer-brace or fore guy was rove. So the squatted sail was held in one position, and allowed the vessel to run in one direction only—with the wind on her port quarter. The set of the sail could not be altered. It was frozen where it was, literally and metaphorically, for it was filled with snow and congealed spray, and could neither be hoisted, lowered nor shifted. By God's mercy it was frozen on the right side.

So at half past 7, in snow so thick it blotted out the Little Red Onion, as Point Traverse light is still called, the Belle McPhee, almost unsteerable, bumped across the boulders of the Traverse Shoal, and into South Bay. She struck twice coming in. Only the sea lessening told them they were in shelter, or semi-shelter, They gave her one anchor but she could not stop with the frozen foresail still up, full of wind and snow and ice. The lashings and preventers at the windlass had to be pounded clear and cast adrift before the windlass barrel could turn or the sail could be handspiked into folds for furling. Meanwhile the schooner had dragged across towards the shoal of Timber Island, trailing 50 fathoms—300 feet—of heavy chain.

She hung precariously in three fathoms of water all that night. Next morning the tug Hiram Calvin reached South Bay, having been sent up from Kingston to salvage the steamer York, which, had been driven ashore on the lake side of Point Traverse. It was too rough for her to work on the York, but she towed the Belle across to an anchorage in seven fathoms under the point.

Here she lay two days, from the bumping she had received, and loading down with ice from the heaving sea running in the freezing weather. They feared she would sink at her anchors. On Dec. 1st. Capt. McPhee prevailed on the Calvin to give him another pluck, this time into the shelter of Cooper's dock, in the southwest corner of the bay, where he could lay her up for the winter. Toronto would have to wait for its coal till spring.

UNFORTUNATELY a protest's legal verbiage has no place for romance. It does not specify whether Belle McPhee was aboard her namesake all this anxious time. Very likely she was, for she often sailed with her father, as cook, or like Miss Hesperus, "to bear him companee." She was as good as any man, ashore or afloat. But if we must have "heart interest," Belle's sister Elizabeth married George McDougall, the mate of the schooner, and he became captain of the C.P.R, steamer Athabasca. He died in Owen Sound in 1907.

The Belle McPhee recovered from her mauling on Lake Ontario and three years later Capt. Sandy lengthened her to 115 feet. But that same year, 1875, possibly on her first fitting out after lengthening, she was caught in the ice off Cape Rich, northeast of her home port, and was lost.

"BELLE McPHEE'S" VOYAGE TOWARDS TORONTO AND HOW IT ENDED - Above, autographs of her skipper and of her mate, who married the skipper's other daughter, and became a captain in the C.P.R. 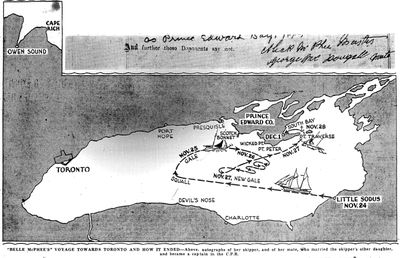