HAVING seen Capt. John Williams into sail for a lifetime and out of sail and into steam for another lifetime and into private life for a third lifetime almost, it remains to tell how he comes to be standing so gallantly upon one leg in his recent photographs. He was nearly eighty when his left leg had to be amputated. And the reason for that goes away back to his sailing days, and the scene is Toronto's waterfront.

We told of his acquaintance with Capt. John Ewart, senior, of Cobourg, whose vessels he sailed as master and partner for some years. His first visit to Cobourg, with Capt. Ewart, to take over the W. T. Greenwood, was remarkable, both from the cordiality of the Ewart family when he got there and for a curious happening on the train going down.

When the conductor came to take their tickets he rather started back when Captain Ewart produced the billets for both.

"No, rumbled Capt. Ewart through his grey beard, "she'll keep the track to-night."

"Thank God you say so," said the conductor. "The last time I had this gentleman for a passenger he told me the train would leave the rails at five o'clock before we reached Darlington and some would be hurt and some would be killed. He said he did not know who would be, or whether he would be included, but he was willing to go. At five o'clock, before we reached Darlington, the train did leave the rails, the engineer and fireman were killed and several passengers were hurt. I was hurt myself, though not badly."

"How did you know the train would run off?" asked Capt. Williams when the conductor had gone.

Capt. Williams felt much better when the train passed Darlington.

He sailed for Capt. Ewart for three seasons and then went to him to buy the Speedwell from him, "Who'll be your partner?"

So the two got the Speedwell, with this glowing encomium from her owner. As a matter of fact, her hull was in good shape, although she had a soft spot here and there in the planking of her centreboard box. In spite of what Capt. Ewart said of her sails she had an almost new outfit, and a new foremast. Yet the insurance inspectors, perhaps because of his depreciation, would not class her for grain, until Capt. Williams had her surveyed in an American port and got a certificate that she was fit to carry 14,000 bushels, an enormous load for her length. Still more to the point, he got the load, 14,000 bushels of barley. There was money for any schooner that could get cargoes both ways, grain out and coal in, no matter how low the freights. It was having to sail one way empty in order to earn a freight, that ruined the trade.

The partners worked the Speedwell hard for three seasons—ice, coal, lumber, grain, anything that would keep her moving. At the end of the third they gave her an overhaul in the winter.

They were getting out a twelve-by-twelve timber to lie on the keelson and back up the apron of the stem. They required white oak for their work and were shown a beautiful piece which all the lookers on declared to be the best white oak they had ever seen.

He spat a great blob of tobacco juice on the timber, said: "Watch that, now," walked to the other end and blew a full blast of his lungs against the hard-grained wood.

"What d'ye see?" he demanded of his watching partner,

"Bubbles," said he, confirmed by the others.

After several applications of this acid test they found a timber which Alex accepted as white oak and they fell to work. John, being the more skilled in ship handling and less in ship building, was doing the scorehacking, or first rough work with the axe, and Alex was following up, hewing to the chalk-like with the broadaxe. They were working in a waterfront shop, near the schooner. The timber lay on the floor beside the workbench.

At the end of the timber the long handle of John's axe struck the workbench, and the blade made a glancing blow.

He sat down on the timber and pulled off his boot and his grey woolen sock. It was sopping wet with blood. And his big toe was hanging by the skin.

Together they jammed the toe back to where it belonged, and, sailor-like, caulked around it with oakum and parcelled the whole foot with canvas. It was too big a bundle for the bloodstained boot, but they drew the sock on to hold all together, and John's overshoe over that. Alex, telephoned for the horse ambulance from Court street and the police took him to the old General Hospital on Gerrard street. This was before the Emergency Hospital was opened on Bay street.

At the hospital the toe was snipped off, the wound was sutured end bandaged and the patient sent home. He felt that he could go right on with his work, but the doctors said "No!" There was much good-tempered resistance and some criticism of the methods employed, and a change of doctors. The wound seemed to heal properly. John was back at work soon. Perhaps too soon. And that season and the next he sailed the reconditioned Speedwell as actively as before. He was as quick-footed as before and never showed a limp.

But something was wrong. Some little thing had been done or left un-done. Perhaps the oakum's Stockholm tar — sovereign remedy for so many things afloat — had not been aseptic. Forty-eight years later, long after he had retired from sail and steam, that severed toe ached again. Even worse than it had before it was amputated. The foot swelled. The leg swelled.

Another trip to the hospital. And this time the mangled toe was snipped off again, but much higher up. Captain William's left leg had to be amputated above the knee. To save his life.

And did he then despair? Did he bemoan his fate, his wife gone, his mother gone, his elder brother gone, his occupation and recreation gone, the four great anchors of his life dragging, as it were, through the shifting sands of time?

He did not. He still had a brother and a sister and a daughter and grandchildren and a great and growing circle of friends—mostly young people. He devoted himself to them.

He had passed the allotted span of seventy, he was passing the psalmist's four score years. He said, with his shrewd practical common sense, that he would not be doing very much walking from now on, anyway. So he did not go to the expense of an artificial leg, but got a pair of crutches, and learned to be so nimble with them that he went up and down stairs and even climbed ladders—but not the swaying ratlined rigging of schooners, for there were no longer schooners with ratlines to climb.

And as for repining, this is his very latest word to the compiler of Schooner Days, and it is so good that it should be passed on for the encouragement of all the high-hearted who never grow old, whatever their age and their rank:

MR. CHICO'S FAVORITE PLACE FOR BEING PHOTOGRAPHED IS WHERE CAPT. WILLIAMS' LEFT FOOT USED TO BE. CHICO IS A TWO-TIMER—COMPANION FOR CAPT. WILLIAMS BY DAY, WATCH DOG FOR TWO OLD LADIES NEXT DOOR EVERY NIGHT. 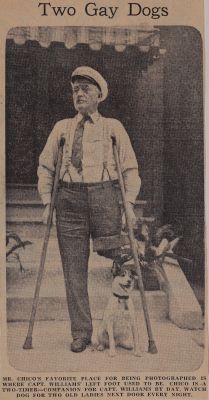