"ON Saturday a fearful gale prevailed on Lake Ontario."

The statement is not The Telegram's, but a quotation from the old Leader-whose name lives in Leader lane, downtown—under date of Dec. 10th, 1866, As a matter of fact there assuredly was a hard breeze of wind "on Saturday," the first Saturday in September, 1941. It blew up to forty miles an hour, dismasted the 8-metre Invader, stripped the 8-metre Vision of her canvas swamped a rainbow, which is a type of small racing yacht, drove launches ashore and forced the powerful sloop White Wings to give up. White Wings was the survivor of the dauntless three who alone ventured the annual race of the Royal Canadian Yacht Club to Oakville—usually a grand affair for a score of yachts, big and little, with a bonfire at the end. Other clubs gave up their regattas entirely.

Down the lake it blew as hard, or harder, with more sea. Still, it was no "fearful gale," and this can be said with knowledge, for Schooner Days flogged against it for eleven hours, from Presqu'isle to Peter Rock, that day, going six knots through the water, but only making good three over the bottom, between the scend of the sea and the number of tacks the south-wester demanded. On the inshore tacks we could see the smoke blowing ahead of the eastbound trains as though they were backing up, which proved the wind was going faster than they were.

No, last Saturday's was not a "fearful gale," but it probably blew as hard as it did in December, 1866, for the Leader was not one to spare the adjectives when it sought to arouse reader interest. It had a good story to tell, and it concerns an old friend, Tom Tinning, oarsman and lifesaver, one of whose exploits was mentioned last week.

"On Saturday a fearful gale prevailed on Lake Ontario," wrote the Leader. "The wind blew from the southwest with such tremendous force that it was considered almost impossible for small crafts to live through it; and consequently many anxious looks were cast towards the lake by those residing near the bay to see whether any vessels had been so unfortunate as to be caught in the storm.

"Mr. Thomas Tinning (son of the wharfinger) was as usual on the look-out to see whether his services might not be required in rendering assistance to some shipwrecked crew, and about one o'clock he discovered, with the aid of a telescope, a sail some five or six miles to the westward from the point of the island.

"The vessel was soon afterwards headed for the Queen's wharf, and ran before the wind very rapidly till she came opposite, and within about two hundred yards of the wharf when she was unfortunately caught on the bar, lurched and thrown partially on her beam ends. The sails were immediately lowered in order to break the violence of the gale, in hopes that when the storm abated she might be got off with the assistance of a tug.

"The vessel proved to be the Rapid, of Hamilton, bound for that port from Kingston with iron for the Great Western Railway. Her commander, Capt. Pace, gave orders to have the jolly boat launched in order to bring the cook—a woman—ashore. Although this was no easy task it was finally accomplished. The sea at this time was breaking heavily over the disabled vessel, rendering it almost impossible for any of the crew to remain on deck.

"As soon as the accident was observed by Capt. Stevenson, of H.M. gunboat Heron, he despatched a picked crew to her assistance in the lifeboat belonging to the harbor commissioners, but after inspecting the vessel the gallant tars returned to the Queen's wharf and reported the case to be a bad one—in fact, it was i their opinion that the boat could not be got off.

"Capt. Stevenson consulted with Mr. Tinning as to the possibility of getting her off, and that gentleman, nothing daunted, expressed his belief that by judicious management she might be got into deep water. He expressed himself ready to make the attempt, and accompanied by Capt. Stevenson, started in the lifeboat on the perilous trip with the generous object in view of saving the vessel and valuable cargo from utter destruction.

'"The sea was running almost mountains high at this time—the difficulty of reaching the vessel being so great that it took the lifeboat nearly half an hour to go about 200 yards. At length, however, by straining every nerve, the gallant tars pulled it alongside of the schooner and managed to get on board.

The mate and five men, composing the crew of the Rapid, were found almost exhausted in their efforts to save the vessel. The captain had in the meantime gone ashore for the purpose of telegraphing to Captain Hardbottle, the owner, at Hamilton, to come to Toronto as soon as possible.

"Captain Stevenson, however, immediately took command, and at the suggestion of Mr. Tinning, had all sails reset in the hopes that a heavy gust of wind might lift the schooner off the bar. It was ascertained that there was only five feet of water on the bar, while the Rapid drew eight, but within a few feet of the bar the water was quite deep enough for safety. As soon as the sails were hoisted the vessel began to "pay off," upon observing which the crew ran into the bow and by running backward and forward succeeded in keeping her moving, and in a few minutes a sudden gust of wind of tremendous force lighted the schooner completely off and plunged her into deep water.

"Unfortunately, however, her stern struck the end of the bar heavily as she was going off and rendered the rudder useless. Being so near the wharf, it was found impossible to lower the sails and having no helm the position of the vessel and her gallant crew was very precarious. The anchors, however, were dropped as quickly as possible, but she dragged them and came up to the wharf with great force.

"Her bowsprit struck the lighthouse and near the end of the western arm of the wharf and knocked it completely down, the forward gear of the vessel being torn off at the same time. Hawsers were then thrown to the wharf, but the vessel pitched so fearfully as to snap the immense ropes like so many pieces of twine.

"Under the circumstances it was deemed advisable to slip the anchors and allow the Rapid to drift past the wharf. The anchor chains were then buoyed up and let go. The schooner then drifted down to the east side of the Northern Railway wharf and ran aground on the lee of the freight shed, where she now lies, and strange to say she is not damaged in the least in the hull. About $100 will put her into complete repair.

'"There was no insurance. Had the vessel and cargo been lost the owner would have been a heavy loser—perhaps to the amount of ten or twelve thousand dollars. Too much praise cannot be awarded to Capt. Stevenson, Mr. Tinning and the crew of the Heron for their noble and successful efforts in saving the Rapid, and none is more ready to admit this than Capt. Hardbottle [Harbottle], the owner, who is well known to the traveling public as the popular commander of the steamer Passport.

"Capt. Pace complains that had it not been for the removal of the buoys at the channel at the Queen's wharf he would have succeeded in getting into the port in safety, but being almost a stranger in this port, he did not know that the channel was so very narrow, and consequently ran on the reef."

THERE is a fine old flavor of Dombey and Son in such a name as "Capt. Hardbottle," for the owner of the Rapid, who was telegraphed to come down from Hamilton in hot haste. Alas, it may resolve into much better known Harbottle on consideration, for that family had marine interests, and the Leader's proof reading was not impeccable.

Thomas' Marine Register of 1864 gives these details of the Rapid:

Built at Buffalo in 1856 by Van Slyke and Notter, 261 tons measurement, Stevenson and Harbottle owners, hailing port Montreal (showing that she had passed to Canadian registry), insurable value $8,000. She had "large repairs and new outfit" in 1861. Her earliest known voyage was when she arrived in Chicago with lumber from Collingwood, Aug, 1, 1856.

As a school boy Schooner Days then examined the hull of an old dismantled schooner lying broadside on the creek bank in Port Credit, in 1894. There was mud in her binnacle box with clamshells in it, for she had been sunk in the harbor and raised by an ingenious pontoon method. They sank two hookers—Ida May and Margaret Ann—alongside her in the shallow water, lashed all together, and pumped the pair out. Their buoyancy raised the Rapid's decks above water so that she could be pumped. But she was too far "gone" to be repaired, and Capt. John Miller broke her up for firewood. She was, he said, as old as he was, and he was forty-five then. The old vessel might, perhaps in point of age been the heroine of Tom Tinning's further gallant exploit But she was certainly not of 261 tons measurement, nor half that big, so she must have been "another of the same name." She was lank and sharp of model, with a raking clipper bow and neat stern. Looked [fast?] but report said that despite her name she was a slow coach. Port Credit tradition was that she had been brought to the harbor at the time of the American war from "the Genesee," meaning Rochester, by a man who, swamped by his creditors, piled all his household goods and portable belongings into her and sailed away, paying them with the foresheet. What became of him no one knew, but various stone-hooker men had tried out the possibilities of the Rapid and found her wanting before she took the dive that filled her binnacle with clamshells.

The other Rapid, the one of the Leader's tale, was one of many schooners carrying iron rails for the new Great Western and other railways which doomed all schooners to extinction. H.M. Gunboat Heron, whose "picked crew" surveyed the Rapid's chances of salvage with disapproving eye, was one of a number of British gunboats which came to the lakes at the time of unrest across the border culminating in the Fenian Raid of 1866. All the bluejackets wore chin whiskers in those days, which doleful custom adds to the horrors of war in 1941 "with the captain's permission."

OLD QUEEN'S WHARF, 1852 - This rare old print, from "Gleason's Pictorial Drawing Room Companion." The harbor by "The Queen's Wharf," which forms the boundary of a narrow channel into the harbor and the only entrance spot marked by the big stake buoy in the picture.

In the Annals of the Royal Canadian Yacht Club, not a wreck scene, but the club's first fleet entering. Note the gigantic locomotive, for which the RAPID was carrying rails! The Rapid grounded near the lee of the Northern Railway freight shed.

CHIN-WHISKERED BLUEJACKETS OF H.M.S.HERON'S TIME, from an old photograph of tars of H.M.S. CHERUB, a contemporary on the Lakes. 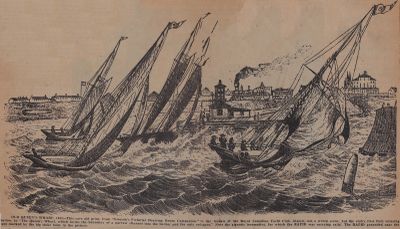