IN OSWEGO the old red brick Reciprocity House had a bar that was a favorite port of call on the way around from the D.L. & W. coal trestles to the lifesaving station at the foot of the Fort hill. It was thoroughly international, and the spitoons were just as likely to rattle in the sawdust with a Come-all-ye from Ontario as they were with Yankee Doodle rendered by "Red Onion" Desmond or his red-onion sons.

Here had its premiere that Prince Edward County ballad "Nerva of the Delaware," though it took much research into schooner history of all kinds, including the schooners that jumped the Reciprocity House bar in rapid succession, to understand the title. The ragged octaves ran like this, to a high-pitched Irish tune:

NERVA OF THE DELAWARE

"I WAS mate in the old Dave Andrews,

Was in her when we sailed.

"And there was a girl, the captain's daughter,

The heroine of this tale

And I'm going to tell of her trick at the wheel

In the rain and the wind and the hail.

Each man loved her on that ship.

She had cooked for her old dad

Many and many a trip.

"She was only a slip of a girl, then,

With eyes as blue as forgetmenots

But she could navigate a schooner

As well as her dad, I'm telling you.

Many a time I've heard him ask her.

And deep brown in between.

Sounds queer, I know, but believe you me

It was prettier'n the crown of a queen.

And a queen she was, but the crown she wore

This time we came out the Lower Gap

And the Old Man called her to the wheel,

was her cloth-peaked schooner cap.

She had an outfit as good as any man's,

Her oilskins and seaboots was able,

But she never sailed without the old grey shawl

Her mother covered her with in her cradle.

If I disremember the date it don't matter

But I know it was mighty late,

It was looking pretty dubious

When we pulled out from the piers

And when we got outside the Gap

It was the worst storm I'd seen in years.

We could not see for rain and snow,

The wind was raving mad.

We could not turn her back for shelter

"Nerva was down in the cabin

Holding supper on the table for the crew.

Her father called out 'Nerva,

What d'ye think we better do?'

In a wink she was out with her oilskins and cap

And quick as a diving teal

She jumped down into the cockpit

And got a hold of the wheel.

"The wind caught her cap as she jumped, boys.

And tossed it high in the air

Was all her beautiful hair,

'Reef your sails, dad,' she called to the captain.

'Make all snug and we'll let her run!'

And I'm going to tell you there was some scooting round there,

"Above the roar of the water,

And the reefing's thundering din,

I heard her call to her brother.

'Bill, please get mother's grey shawl from the cabin

And pin it under my chin.'

That was all she had, boys,

While she steered the whole night through

To keep her hair from blinding her

As she saved us from broaching to.

We pumped and kept our barley dry,

And the sails upon the spars.

She steered a true course for her port

Though there wasn't any stars,

"Seemed hours before she spoke again

Through the howling wind and the hail.

'Dad, I see the light of Oswego,

'Show the torch and blow for the tug, dad,

'And I'll head her for the pier.

'And have your heaving line handy, dad,

'We're getting mighty near!'

"We blew and blew our lungs out,

But no tug wouldn't hear!'

And the Dave Andrews drove like a wild bull

With one little girl at her wheel, boys,

A little thing, plucky and thin,

With her mother's old grey shawl

Pinned underneath her chin.

"I've seen some seas in my time, boys,

But this was the worst I ever beheld.

Sometimes we jumped for heaven

And sometimes plunged for hell.

The wind it blew, and the water flew

And the pierhead light flamed red,

And for white the foam of the breakers' boom

Was grimly grey instead.

"We got everything off but the staysail,

And called, 'Get your lines out, dad!

We didn't snub her the first try,

But the next we caught one spile,

Which held us for a while.

"I rushed aft with the Old Man

To lift Nerva from the wheel.

Her frozen hands was bleeding,

Her feet she could not feel.

Her hair was iced to her back, boys,

And it seemed to me a sin,

Was froze beneath her chin.

Nerva, that brave girl, lies under the sod.

Her dad and Bill have met their God,

God, may I be welcomed in

By Nerva, with her mother's old grey shawl

Pinned underneath her chin?"

"WELL, BUT," some greenhorn like Schooner Days would be sure to break in about this point, "where does the Delaware come in?

And how did the girl get the name of Nerva?"

The answer, at its gentlest, would 'Don't you know nothin'? Nerva was her name, see, just like Joe Cruthers' name was Joe. And where you been brung up, that you don't know that round-sterned Delaware you walked past by the coal trestles, the old black box with the red bottom and lead color covering board, began life as the white Dave Andrews? Every South Bear from South Bay'll tell you the rhyme:

"You may paint my sides black,

That were once painted white,

You may alter my name if you will,

Of a dark, stormy night

"That's the round-sterned Delaware to-day, and you ask Will Wakeley, who's sailing her now, if them words ain't true. He's wore both hands as calloused as a horse's hoof steering her, and he's the only man I ever heard of making the Dave Andrews pay—just as Nerva McCrimmon was the only one who could make her steer a straighter wake than a rail fence.

"Nerva was in her two seasons later, when the Dave Andrews drove ashore three miles east of the Fort here, in a, blinding snowstorm. The 13th of April it was, 1880. The life-savers had to put their boat and gear on sleighs to get to her, and when they got there they couldn't get their boat off the beach. So they shot a line to her, with the rocket gun, and with it a printed card in a case, telling the crew what to do.

"They hauled the big line aboard, and a messenger, so the lifeboat crew could send out a britches buoy.

"But something wept wrong and the men wouldn't trust themselves to the buoy. 'It's safe as a chair,' says Nerva, 'Yes, and who'd go to his death in a chair?" whimpered one poor beggar, perishin' of cold.

"'Well, I'll show you,' says Nerva. 'Rig the bosn's chair on the messenger and I'll go ashore first and come back for you!' And she did. Mebbe that's how she got her own death-o'-cold. She died a-soon after. That same year, I think.

"But the crew got off. And the vessel got off. But she left her name there. She went ashore the David Andrews of Picton, and she came off the Delaware of Oswego, for somebody bought her on the beach and changed her name when they changed her registry. And then she was bought back into Canaday, and that's why she's the Delaware of Port Hope, to this day, in this year of the Untied Snakes of America, 1895. You're too young to drink, but you're not too old to buy two beers, and I'm not too old to drink them both. Here's how!"

FROM no less respected an authority than Mrs. E. S. Rorke of Cherry Valley, one of the shining lights of the great service held every spring in Prince Edward County for departed and departing mariners, comes full confirmation and explanation of the ballad.

She told Schooner Days last month that she knew the "heroine of the tale" well, and the story was all true.

Miss Minerva Ann McCrimmon was the young lady and she was a daughter of Capt. Nathaniel McCrimmon, of South Bay, who sailed the David Andrews, Two Brothers, and other schooners, a respected Prince Edward County mariner, of a large lakefaring family. Soon after the David Andrews became the Delaware, Minerva McCrimmon became Mrs. Henry Whattam, and she died shortly after her marriage, of some severe congestion. Mrs. Rorke has often seen "mother's old grey shawl," the shawl Mrs. McCrimmon "Aunt Eve" to a host of Prince Edwardians, laid over her when a baby in the cradle and it was a treasured keepsake of her daughter.

Mrs. Rorke herself was thirteen when the bright Nerva, the belle of South Bay was laid "beneath the sod." She had remarkable hair, as the ballad said, and when the sun shone on it it would be gleaming gold and rich brown and black as glittering coal as it tossed in the wind. She was a gallant girl and had many adventures, and was much loved.

As much cannot be said, perhaps, of the Dave Andrews, but she, too, had her adventures and perished gallantly after many mishaps. As will be told next week.

"MAKE HER SNUG AND WE'LL LET HER RUN!"—This vivid snapshot of the crew on the cabin top reefing the schooner's mainsail in a breeze shows how the David Andrews was shortened down. It, and the contemporary portrait of the Oakville sailor shown below, also illustrates the "schooner cap," the peculiar headgear of the lake mariner, which our heroine replaced by her mother's shawl. The Oakville sailor, Capt. John Andrew, known and respected as "Threefinger Jack," had no connection with this incident other than the partial resemblance between his name and the schooner's.

CAPTAIN JOHN ANDREW of the BALTIC, well-known Oakville mariner and brother of the better-known CAPTAIN JAMES ANDREW, who designed and built several schooners and yachts, including' the j famous AGGIE of Oakville, still afloat after sixty years. 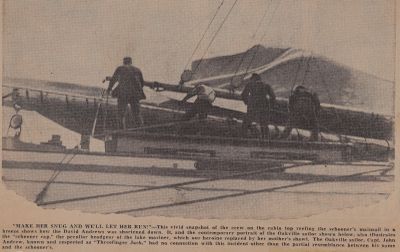 Captain John Andrew of the BALTIC
Groups of Related Records