MANY'S the boneyard lake ports have had to show but the most striking seen in half a century was the extensive anchorage of the National Yacht Club at the foot of Bathurst street this week, after the slap of the Galveston hurricane on Sept. 25th.

For days the water neatly mooring a hundred yachts all summer was littered with splintered deck planks, broken masts, hatches, cabintops, cushions, fenders, gear and torn canvas, broadcast so thickly that capsized or sunken hulls could with difficulty be distinguished among it.

In the centre of the moorings, like a great cliff, a clamshell dredge reared its black derrick arms. "Plunk!" the clam would descend through the litter of broken boards. "Scrunch!" you would hear the submarine grinding of its teeth. The bubbles would sizzle to the surface, and up it would come with half a cabin cruiser in its jaws.

Next bite it would bring up a shredded mainsail tangled with its broken gaff and boom in a ton of slimy weeds. And the next would come a mess of boat cushions mixed with cabin china and the outfit of a galley. It was like seeing a steam-shovel go through a cemetery.

But it was absolutely necessary. The National moorings were so filled with wrecks and wreckage that damaged yachts still floating could not be got to the club's marine railway. They had planned a field day for Saturday, hauling out for the season, but the gale burst on Thursday and caught the whole fleet.

It was interesting to see that Major Steer's schooner El Viento, stripped of her spars while the major is on war service, came through unscathed. She offered little windage, and was fortunate in not being cut from her moorings by any of the yachts which had dragged or broken adrift.

SEVERAL have asked for the Beaufort scale of wind velocities mentioned last week. Here it is, with what the scale calls "seaman's description" attached.

Force 1—Light air, wind blowing from one to three miles per hour 20 feet above the water surface.

Wind velocities are from 100 to 10 per cent, greater 75 feet above the water than the "forces" shown. When it is blowing at a mile an hour on the surface it will be blowing 2 miles an hour 75 feet up; and in a hurricane force the wind velocity will be above 85 miles 75 feet above sea surface.

In general, sailors have no means of measuring wind velocities. T. O. M. Sopwith is the first the writer had seen with a wind-gauge. He had one in the America's Cup challenger Endeavor I. in 1934. Sailors judge the force of the wind by its effect upon the ship or the water and guess at speed in miles per hour. Guesses usually underestimate the velocity of light winds and exaggerate the velocity of strong ones, but they are right when they argue that a cold wind is "heavier" or "stronger" than a warm one. Winds do not blow horizontally but at tangent estimated at 5 degrees average. When the air is cold the tangent is less, and the "lift" is less and the pressure therefore greater. That is their story, and they stick to it.

"When the belly of the mainboom scrapes the top of the house then you've got a good breeze" they used to say in the salt bankers out of Lunenburg, meaning when it was blowing so hard that the mainboom bowed till it scraped the top of the cabin. That is one example of gauging the wind's force by results.

"When the fly stands on its head" was a lake criterion for hurricane strength—justified by the wind's performance last Thursday. Flags were tossed upright over mastheads. The one on Tip Top Tailors was pointing south while the one on Loblaw's pointed north during one of the fiercest gusts. A schooner's fly was the cone of bunting used as a windfinder, something like the windsleeves used in the air service, but more slender. Major T. D. Hallam, pioneer of the windsleeve in the Iast war, got the idea from schooners' flies.

Sir,—I am taking the liberty of enclosing a clipping from last evening's Brantford Expositor which may be of interest to you as these two sub-lieutenants are great-grandsons of Captain Donald Manson about whom you have written most entertainingly on several occasions in your Saturday special articles.

Several years ago you had several articles dealing with the life of Captain Manson who sailed such well known schooners as the "Erie Belle," "Anna Craig," "Caroline Marsh" and others. Only a short time ago you had another article referring to Captain Manson (sometimes known as "Roaring Dan").

I read your Saturday articles with great interest. You are doing a real service in reviving many of the old traditions of the Great Lakes and particularly the ports along Lake Ontario. When I was a boy I spent quite a few summers at Port Hope where I became familiar with the locale of many of your articles.

It occurred to me that you might be interested in knowing that the seafaring traditions of one of the pioneer lake captains continues to the third generation.

Sir,—This is the first time that I have written to your weekly page in The Telegram called "Schooner Days."

A few weeks ago I had a very enjoyable cruise to Fort William aboard the S.S. Manitoba of the CPR fleet. This ship is very old, having been launched at Owen Sound in 1885. It is truly remarkable, I think, that this steamer has outlasted so many other passenger ships on the lakes and even to-day appears to be in extremely fine shape.

Since those early days the "Manitoba" must have had an interesting career.

I thought that it might prove of interest to your readers if you might give any further account of her "exploits" on the big lakes. We are apt, sometimes, to poke fun at the "80's" and "90's" of last century with their horses and carriages, their sailing ships and their locomotives with the enormous spreading funnels, but the S.S. Manitoba is, I believe, fitting evidence that our fathers and grandfathers were first-rate shipbuilders. Yours sincerely,

(The Manitoba was built in 1889 by the Polson Shipbuilding Co. at Owen Sound, Ont. The company also had a yard at the foot of Frederick street, Toronto. Her engines were built by D. Rowan in Glasgow in 1883, and two new Scotch type boilers were built by the Collingwood Shipbuilding Co. in 1914. She is 303 feet long between perpendiculars and measures 2,616 gross tons; a fine old semi-centenarian.)

"Your most interesting article in last Saturday's paper about Thursday's storm brought a flood of recollections to mind in reference to the big storm of September, 1900, at almost exactly the same time of the month.

"You may remember that a series of races between the Genesee of the Rochester Yacht Club and the Minota of the R.C.Y.C. had been arranged for the almost forgotten Fisher Cup.

"The late W. R. McGill of the Q.C.Y.C. having decided to take in this event had invited me to accompany him on that great little ship, the Petrel. We had as crow the redoubtable mate, Aykroyd, the late Dick Northcote, Walter Miller and myself, with Mr. McGill as skipper.

"We had a fast passage across the lake, but when off Olcott the wind headed us off and made it a close haul down the south shore. It blew quite hard all day with considerable head sea and was quite dark when we cleared Braddock's Point, from where as you know the shore line falls away to the south.

"After standing on for some time our skipper decided to run in and eventually we picked up the dim red light on the pier at Charlotte.

"Going over the bar just outside the piers a following sea picked up our dinghy and deposited it on our counter, where it remained momentarily. We got in safely, however, and found the river full of storm bound shipping, all darn glad to be inside.

"On returning from the disappointing series of races, where we had the chagrin of seeing Minota carry away her bicycle tubing spreaders after having the first race in the bag, we put into Oak Orchard for the night.

"I think that it was about midnight when we had to shift as far up the creek as we could get, it was blowing so hard that one could hardly stand when hanging on to the rigging. The old Aggie was also in the creek and there we remained for, I think, three days, in which Lake Ontario was like a boiling cauldron.

"We found our way finally to Olcott and coming home ran into another blow. About half-way across our dinghy was swamped and in picking it up we broke it up rather badly. It broke away a second time and our skipper decided to let it go, as he was afraid it would put a hole in us. Years after I saw the same dinghy in Darlington harbor.

"On this same occasion one man was swept overboard and was drowned off one of the Hamilton boats, also returning from the races.

"Taken altogether, it was an exciting trip, and looking back over the 41 years which have since past and during which I have patrolled around the British Isles, winter and summer, with the Navy during the last war, I do not remember a heavier gale.

My sailing on Lake Ontario is almost contemporary with your own. I bought my first canoe from Walter Dean in 1897, and one of Toronto's first sailing dinghies from George Aykroyd in 1898. My first mentor in the rudiments of sailing was my old friend and schoolmate Frank Moore, of the R.C.Y.C.

"You may remember me sailing with you at Belleville on Haswell one year in the L.Y.R.A."

I am, yours sincerely,

Sublieutenant, engineers, Royal Navy, and paymaster sublieutenant, RCNVR, respectively, separated in service by thousands of miles, but united in kinship with Capt. Donald Manson, of Port Hope. Their home is in Brantford. 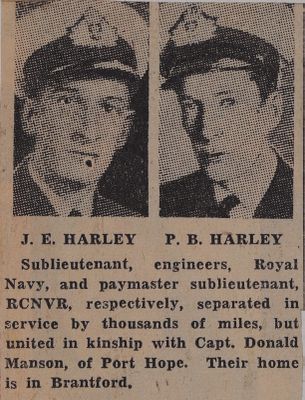