Does her wreck lie here at the foot of the Highlands?

LAST week we began the puzzle of whose was the wreck which lies mouldering at the foot of the Highlands of Scarboro a mile or more east of the Guild of All Arts and something west of Centre Point and Highland Creek. We got as far as guessing, from the 8-inch spikes and the dimensions of the surviving timber, that it was a vessel of around 150 tons register, and we weeded out almost a dozen vessels lost during this century, on the grounds that the size did not fit, or their lake grave was known to be elsewhere, or they were too recently wrecked to be so far gone. This threw us back into last century, and the memories of older readers.

One of the schooners lost near the Highlands in the 18-hundreds was a two-master named the Marysburgh, and it has been suggested that the wreckage might be hers.

The Marysburgh was built in the ancient and vanished "Port of Cramaha" of the earliest Dominion registers, otherwise Colborne, Lakeport, Keeler's Creek, and Cat Hollow, some eighty miles east of Toronto. George Ault, a Kingston builder, was her master carpenter.

Date of her building was 1854, in the wheat boom of the Crimean war and she was then christened James Leslie. Her first recorded measurements are 99 feet length, 22 beam, 9 feet depth of hold, and 125 tons register. James Burke and Co. of Bowmanville was [sic] her owners in 1864 and John Burke was one of her early masters. Later she was reported as 157 tons; still later 150. This last figure was after she had been rebuilt in South Bay, Marysburgh township, Prince Edward, in 1870, for Capt. James Collier, and renamed Marysburgh, as the name was then spelled. He had sold her to Capt. John Allan of Oshawa by 1873; and she was lost soon afterwards.

Confederation was new when the James Leslie had her face lifted and when she emerged from master builder Jack Tait's beauty parlor with the permanent smile of Marysburgh all over her countenance. The beaver was more honored as the national emblem then than it is now, and to distinguish her as a Canadian among the hundreds of American schooners then trading on Lake Ontario she had a big flag at the foretruck, wiin a brown beaver on a white background, with a broad blue border. Of course, in addition, she had the new Red Ensign with its "patch-work quilt" escutcheon of the newly confederated provinces, which has since been simplified, if not improved. But she, the James Leslie, had been an industrious schooner, and it was intended that the Marysburgh should be also, and the beaver was emphasized as her houseflag.

She was a green painted schooner, green from the bulwark rail to the waterline, as an old picture in Picton shows, and she came to her death through a green light. Frenchman's Bay, in the old days, was the only port on the lake distinguished by a green lantern in its lighthouse — it was a "private" harbor, the piers having been built by a harbor company in 1843. The Marysburgh, bound for Frenchman's Bay, was standing inshore one dirty night, sighted a green light, and next moment found herself pounding on boulders where no boulders should have been. Morning showed that she had missed Frenchman's Bay by five miles and come in to the eastward of Highland Creek.

The green light blamed for her undoing was claimed to be a railway semaphore light, and there was talk of suing the Grand Trunk, which was a popular sport in the last century. The railway comes close to the water here, so close that for years a line of cribwork filled with stone was employed to protect the tracks between Highland Creek bridge and Port Union, where thirsty locomotives still water for the wrestle with the Scarboro grade. The railway replied, with considerable emphasis, that there was no green semaphore light visible from the lake in this vicinity, and never had been. It might be possible, however, to see a green light on a train watering at Port Union, one mile or more east of the creek, but it would take good eyes to pick one out from the lake on a thick night. The Marysburgh get no damages from the railway—but total damages from the beach. She broke up.

The exact spot of the Marysburgh's destruction has never been charted. For it was not in any normal navigation course, but it must have been east of Centre Point, where the boulders once bedded in the clay of he promontory strew the bed of the devouring lake. Ironwork of her wreckage, chainplates, wire rigging and deadeyes, were raked up from under her remains by stonehookers in the year 1900, and planks and timbers in the marsh in the mouth of Highland Creek, inside the railway bridge, were said to be the Marysburgh's. Saying so was not convincing, for there have been more stories than one to account for old timbers in the Highland Creek Marsh.

But the Marysburgh must have come in east of Centre Point, and this wreckage at the foot of the Highlands is west of that.

- Ten to one this is not the wreckage of the Marysburgh, because forty years ago half of her—some of the port bilge and most of the starboard side—was on the beach east of the mouth of the Highland Creek, opposite the fill which carries the railway across the Highland Creek marsh. This, apparently, was where the Marysburgh struck. Her wreck may be there yet, but it is not visible. May have been sanded in. Some of it may have been carried into the creek mouth.

The creek outlet is now very small, sometimes six feet wide and a foot deep, sometimes completely choked with a gravel bar. The marsh behind it, once the estuary of the Highland Creek and now its delta, could hold the remains of all schooners of Lake Ontario.

It would take an ice shove of vaster proportions than Lake Ontario has seen to carry the remainder half a mile around Centre Point and land it in a birch grove at the foot of the cliffs where this other wreckage is now mouldering away.

WHERE THE HIGHLANDS DIE DOWN INTO CENTRE POINT—all that can be seen of the wreck is the timbers to the right of the picture. 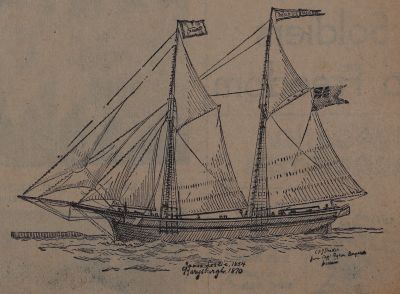