HUGE headlands of history rush out at us from the blackness of the December morning, their presence impressed by the roar of seas at their feet and the lofty solidity of their darkness against the liquid darkness of the night sky. Lighthouses swing brief swords of flame across our path and vanish to avoid giving a "fix" for enemy bombers. I remember two years ago, when one of these northern lighthouses was still being maintained continuously, the lightkeeper's wife received a polite warning from a new ARP warden that the lamp in her cottage, at the foot of the light tower, showed at night, and she would have to black it out.

The deck watch do not know whether we have been going out the Rathlin Channel, north of Ireland, or through the Minches and around the Butt of Lewis in the Hebrides, on the west coast of Scotland. They think we are doing both, which, as Euclid would say, is absurd and impossible. As a matter of fact we are doing neither. Except the escort who shepherd us through assumed minefields only one man knows, the skipper, and he is a Devon man like Drake, who did not make a habit of broadcasting.

In these days the deck seldom knows—and seldom professes to know—as much as the bridge. The honest tar of the Sunday School library who respectfully tugged at his forelock and could always tell the young master where the ship was exactly at any moment of the day or night is as dead as his reckoning. The O.S. and A.B. of to-day leaves navigation to the bridge and piloting to the pilot, and may not be able to tell the Mull of Castyre from Malta if he sees either.

COME AND GET IT

It breezed up to a winter gale and the bursting sea is white against the before-breakfast blackness. The banana boat is dancing the tarantella, and few appear for the first "unlimited" ration of bacon and eggs any of us have had since leaving America.

"Where are those flying men of yours?" demands the captain, all alone at his table, "air sick already?"

"No, busy holding bowls for your officers," quoth I pertly, defending the air arm by right of being a Short Snorter.

The skipper gives a great laugh as he swings eight points in his swivel chair with the roll of the ship.

"She's not that bad when you get to know her," he says defensively. Noah said the same of the Ark and Nelson of the Victory. Every man for himself, but every sailor for his ship.

The four American army flyers are actually catching up on sixty sleepless nights in London learning how Britons beat blitzes. So is their navy man. Our own R.N. boy, honest as a British guinea, has admitted he has no interest in food. The international banker and the refugee ladies have nothing to report. The tanker officer, home for two weeks' leave after two years' service, and now going out again to an unknown ship, bounces in, rubbing his hands and purring louder than Mrs. Blitz and family, at the bounteous breakfast prospect. This accounts for our whole passenger list. The ship's officers have been on duty twenty-four hours continuously and are more interested in sleep than food.

"Trawler" to you, gentle reader, who never heard of trawlers until they began to be used as minesweepers in the last war. "Drifter" to the coastal seaman, although it must be confessed there is not enough difference to quarrel over. Boat for boat they look the same, the method of their fishing is different. Sailing fishermen for deepwater work are extinct around the British Isles. Drifters and trawlers alike use steam.

This herring drifter is coming home, maybe from the Greenland grounds, maybe from Iceland. She is a grand little ship, half as big as our banana boat, although that is not saying much. Her lines are as unbeautiful as those of the fat canallers to be found on Toronto's waterfront, and her size is about the same as the corvettes and minesweepers to be found in the same vicinity.

Ten thousand ton freighters are wading into it, making snowstorms when they attempt six-knot speed, filling their well-decks until the water pours off them from both sides and at both ends, weaving around across their own wakes like drunken men. Our Tarantula is better than they are, but she rolls Mrs. Blitz's kittens off their black-and-white feet. But the fisherman, black topped, red bottomed, designed to lie quietly, or at least easily, to her nets in the roughest water, comes swimming as a gull swims, on even keel. She shoots on a sea, climbing its back and scending down its front with never more than five degrees pitch or plunge or roll. Every sea dog on the North Atlantic watch envies her crew. However hard they fare they live in a seapalace compared to the bouncy, squirmy, jumpy, wriggly craft the naval designers have produced.

She has two stubby masts, fifty feet above the water level at their trucks, but within a quarter of a mile of us she will drop in the hollows until she is hidden to the last inch of her mastheads

below the wave brim. Then she rises like Neptune himself, bolt upright, not even swaying, white water smoking from her walings, thirty-foot plumes of salt spray like Prince-of-Wales feathers racing along her flanks and blowing ahead of her bluff bows. Dry as a chip. All the water is outside of her and she stays on top of it.

She passes so close that we can see the mufflered man in her little bridge wheel-house, cheerily sucking his pipe and giving her a whirl this way or that—never very much wheel, but always some—to keep her sweet and lively among the pushing seas. Then he and she vanish as a wall of North Atlantic intervenes. When they are next visible she is well past, and giving the big motorship that tries to keep line astern with us palpitations of the heart. But she pulls through to leeward of the whole lurching, charging fleet of outward bounders without once having to alter helm, or even getting a warning whistle-blast.

"They know their business. If they didn't they wouldn't be out here," is the judicious praise of one of our sea-going gunlayers. And that's a lot to get from the navy.

THOUGH we be but a fleet of freighters—motorships, fruiters, colliers, cattle ships, tankers—and painted grey even to our portlights, and though our escorts are lizard-painted destroyers and stubby corvettes and minesweepers, and low-flying planes and bombers, there is Elizabethan grandeur in the way of our going.

Especially when it blows hard — as it does most of the time — and the grey hulls, leaping and diving like breaching whales, fling high their heads and kick up their heels and their thrashing propellers, with great loops of flaming signal flags snapping to shreds on their halliards.

That is the way we talk, the only way, except the aching flash of morse from bridge to bridge, like acetylene torches burning through the steel grey distances of the storm. Every ship has wireless, every ship has three watches of wireless operators, but every ship is dumb as the dead on the air, so as not to give the enemy the slightest clue to our presence or intentions. The senders are sealed, to be broken only for the last-chance SOS. We can and do receive B.B.C. and short-waves on three or four wireless sets. But instructions as to courses for the day or night, rendezvous for next morning, time, place, distance weather, and news of our floating neighborhood, all this is spelled out by the flashing lamp or flaming flags in red, white, blue and yellow in strings or hoists of endless twos and threes in endless combinations.

"Sigs is no cinch!" gasps a panting signaller, the wind whipping his heavy-weather oilskins about him as he comes sweating from the bridge. Manual labor of hoisting and downhauling a dozen hoists from that reeling platform is heavy. And what of the eyestrain and the headstrain of reading them, with all ships standing on their heads and the great squares and triangles of color reduced to end-on lines and threads or mere points by distance and the direction of the wind?

In the first war-convoy in which I crossed in 1939 we were flagship, being a fast passenger liner, and led the centre column of three, with ships close abeam and astern of us at first each a cable-length apart. Six hundred feet is too close for maneuvering big ships, though it makes a compact squadron and a compact target which a torpedo cannot miss. We did not lose any ships, but we buried two passengers who died of heart strain. It was the bridge officers who should have died of suffocation, for their hearts were in their mouths 24 hours a day with the risk of collision. The ships often got within biscuit loss. We kept together this way while we were sheep without a shepherd, for our escort left us while Halifax was still within sight and we had no more protection till within two days of England. We practiced dispersal and zig-zagging, and increased our clearance between ships. We towed kegs to show our next-astern our position in fog or darkness, the white feather of foam being a good marker.

In this convoy the escort is much better organized and we space out to give it room. The columns are half a mile apart, and although we close up in a seaway, as some make better time on the same number of revolutions than others, there is usually plenty of room for torpedoes to miss us and for patrols to go dashing through dropping depth charges without blowing us out of the water. As our numbers increase our columns of charging ships cover a great area, sometimes 10 square miles of the sea.

Did I say that—-that I would tell you where we were, a week later? Afraid I reckoned without my host, for we steered so many courses, at such slow speed that only the banana boat's bridge log would fix our whereabouts at the end of a week—and the censor would be grieved if it did. Mid-Atlantic, which extends from Greenland to Guiana, must suffice. But "in our next" we will, sure for sure, tell something of Sunday in the Roaring Forties and Furious Fifties.

"CONVOY" was the appropriate theme of many of the Christmas cards which have awaited Schooner Days return. This good lively one from William McDowell's picture does not exaggerate the sense of motion and action when a convoy gets to sea, and cargo ships, destroyers, corvettes, and planes crowd the scene dramatically. We were packed together even more closely in the first convoy of the war, in which the writer left Halifax Sept. 16th, 1939, but we did not then enjoy the protection of patrolling planes — Spitfires from the shore and little scout planes catapulted from the larger ships' forecastles—which the McDowell painting emphasizes. 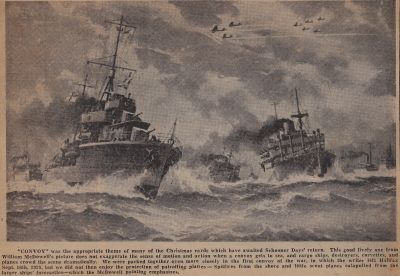