"SUNDAY AT SEA." As a child I used to pore over a Victorian engraving showing the deck of a ship, with great white curtains of sails hanging in motionless festoons in the calm, above strings of shirts and smocks—the long-haired whiskered sailors of Victoria's golden days apparently wore smocks—hanging up to dry. The sun was setting in the picture and threw long shadows as the grizzled captain, "uniformed" by his peaked cap, read from the Good Book to the barefooted tars. However true this picture was, the artist conveyed a lasting sense of the peace of late summer sunlight on a calm evening.

I didn't know it was Sunday till after dinner to-night, when, holding on with both hands to get to the radio to hear the 9 o'clock broadcast, I heard a far away Scotch voice proclaiming from some seaport pulpit:

"And noo, we will brring our sairrvice to a close wi' that grrand humn, 'Haud the Forrt!'" followed by a rousing chanty from a splendid choir and congregation:

"Ho my comrades, see the signal

Waving in the sky!

'Hold the fort, for I am coming'

Wave the answer back to heaven

In this welter of the northern seas, with the banana boat's dining room panelling screaming louder than Mrs. Blitz and her family in full cry after the rats, and Pearl Harbor and Manila and Hong Kong and the Prince of Wales and the Repulse heavy on our hearts, and Singapore who knows how far around the corner, this old hymn from the American Civil War of eighty years ago was a better nightcap than the BBC emphasis upon the latest successes the Russians were having.

I felt ashamed for myself that it was only when I heard it I remembered this was Sunday. It was not the ship's fault, for everyone was busy and we had neither chapel nor chaplain. The captain's apprenticeship in holy orders might see him through a burial service if the need arose. but it didn't, and he was concerned with other matters all day.

There used to be a Bronte schooner captain who would heave his vessel to at twelve o'clock Saturday night and keep her that way, that is, stopped under sail, until the middle watch was called Sunday at midnight. There were more who never set sail on a Sunday than there were 'fraid cats who remained at anchor or tied to the dock rather than start on a Friday. But in the convoy trade, as at sea generally, Sunday has to be the same as any other day, and if any captain stopped his ship for twenty-four hours because it was Sunday—or for any other reason—Hun or Jap might teach him the error of literalism at the point of a torpedo.

For my own part I had been so rushed to catch the ship, with three changes of passage, that I had lost track of time with my last newspaper, which was Friday.

But the message to Hold the Fort was for those who kept the Sabbath and those who forgot it. So with "By Thy grace we will" ringing in my ears I laid out my clothes, overcoat, lifebelt and flashlight, said my prayers and turned in, chocking myself against the roll of the ship with pillows. By lying on my good ear I drowned out the crash of seas on deck, the reassuring scream of the wooden bulkheads — "while she creaks she holds"—and the charge of the light brigade of my luggage, two pieces in number, galloping across the cabin floor with each heave. Oh, well, they couldn't go far, and were both locked, so . . .

I dreamed I was home in the glowing August weather, and the iceman came around to the back and carelessly dropped a fifty-pound block of ice into the top of my refrigerator, and I woke up with the crash of No. 4 lifeboat overhead leaving its gripes and fetching up against the afterhouse. My dream seemed to be an experience lasting several minutes; the man came up the steps, was warned to be careful, hove his block up slowly, and dropped it and then was reprimanded and we went to work to get the jammed block into position. Yet the dream must have started with my hearing of the boat's crash, and it was completed and I was awake, before that crash had ceased to sound in my ears. In other words it was instantaneous.

I was too sleepy to think that this might be a mine or a torpedo, but I dressed and went up to see what the trouble was. It was pitch dark on the blacked-out deck, and blowing the parka off one's head, but some stars showed through rifts in the clouds, and I found the "firing line" by the strong conversation of English and Scotch sailors, lookouts, quartermasters and gunners. Give them credit — wrestling a five-ton lifeboat in the December darkness, with the ship trying to loop the loop with them and not a lantern or flashlight allowed lest it betray us to submarines. They got pries under her and wedged her fast in the berth she had made for herself against the house, and lashed her there with spare gear till morning. Then, salt water streaming from their oilskins, the watch below trooped to their bunks, and the deck watch carried on for the remainder of their four hours. Not a glimpse, all the time they were working, of the twenty ships which were rolling, roaring, leaping, diving all around us. It was so dark one could scarcely distinguish the wavecrests alongside. There was no phosphorescence.

HERE we are at the shortest day of another year. It feels cold enough for us to be at the North Pole, so there is no surprise over the sun sleeping in and dawn coming in the middle of the forenoon. Besides, it is Sunday again. This time remembered.

A fine spectacular dawn it is, too, with the end of a rainbow in the northwest horizon, and great masses of slate-colored, white, and amber hued cloud piled against the clear blue bowl of heaven. In the short intervals of sunshine the fleet makes a grand sight, the highest number of ships we have counted yet, for a dozen new ones appear to have joined us as the tardy sun widens the horizon.

Report spreads that they are part of Admiral Raymond Fitzmaurice's convoy of thirty merchantmen, bound the other way, which had a running fight of five days with a pack of submarines, losing two of the convoy and two of the escort but killing three of the sea snakes in the fight, and bringing down two of the long range Focke-Wulff flying-boat bombers, and wounding a third.

Maybe they are, separated from the main body on some dispersal manoeuvre, when the submarine torpedoes got the escort destroyer Stanley, another lease-lender, and the auxiliary aircraft carrier Audacity. It was her guns that got the bombers, before the torpedoes got her, and two of the smaller merchantmen.

All this is guesswork, a dilution of short-wave interceptions. All we can be certain of is that Fitzmaurice has a great reputation as a convoy commodore, and that we have additions to the family. They make splendid pictures as they leap and dive and breach like leviathans, the wintry sun showing them up black as enameled whales, or all clad in golden scales as the low rays strike their streaming sides. The fleet is hardly making headway against the high head sea; you can see the twisting log-line pause, halt and slowly resume spinning. We are eight days out but not half way home, for our course has been lengthened by continuous alteration and by gale after gale. Riding high and light we have not suffered much, but my heart goes out to the laddies in the corvettes and destroyers who wade through water up to their necks most of the time in the task of shepherding us and cannot get any sleep with the wild and continuous motion.

Then snow squalls sweep across from the southwest—

and the whole fleet vanishes in a white-out. The snow is hard, like white frozen hail, and the wind drives it like bullets. Every three minutes our horn bellows and there are challenges and answers all around us.

By noon it has cleared and settled down into another hard nor'-wester, blowing the signal flags to leeward in great arcs of spots of flame. Morse messages again burn like acetylene torches and the five shepherding destroyers and corvettes dash around as collies do when the drovers decide to turn the cattle at the next cross street. (But you are too young to remember when city by-laws prescribed certain streets for driving cattle to market in Toronto!)

Last week, the first time we heard our siren go, the boldest held his breath in anticipation of eight short blasts following the long one, which is our abandon-ship signal. But we have become inured to single or double toots, which only mean course-changing, and these now resound through the fleet.

The flags and the Morse have together spelled out dispersal orders. Apparently our escort is changing over, to take charge of the strangers on a new course, perhaps to catch up with their main body. We are told to beat it on our own—-welcome news to our Tarantula, which, having so many legs, is the second fastest freighter in the fleet. At that she is not fast enough to outrun a submarine, but she is capable of half as much speed again as the convoy's pace.

When the snow squall cleared, thirty-four ships were in a ten-mile circle. When twilight settled down at teatime we seemed to have the ocean to ourselves, though from the bridge they said they could still sight the commodore—-not Fitzmaurice, but the original flagship of our fleet. All the rest of them had vanished behind the horizon, nigh at hand but empty, brightly lighted by Venus, hanging like a lamp on the port bow. Where we were we did not know; we had steered so many courses, everything but easterly, that it was idle to guess. It seemed too cold to be near the Gulf Stream. From the number of times the clock had been put back we were far enough west of Greenwich to be half way over.

Judging by our escorts' conduct we were beyond the danger zone of long-range bombers from France and Germany, and our further protection was in the hands of the combined — or were they yet combined — United States and Canadian naval patrols — or were they patrolling? Academic questions to you, but it makes a difference if you are on the middle of the ocean in the Battle of the Atlantic.

Our second Sunday at Sea ended as Venus dipped beneath the western waves.

It is fine for passengers whose affairs call for it to be able to brave the Battle of the Atlantic in winter convoy, but the big red apple goes to the lads in the minesweepers (above, right, you can tell the sweepers are in action by the black balls aloft) and the boys in the corvettes and destroyer patrols (below) who broom the ocean streets clean of surface perils and under-water menaces, with or without aerial assistance as circumstances compel. 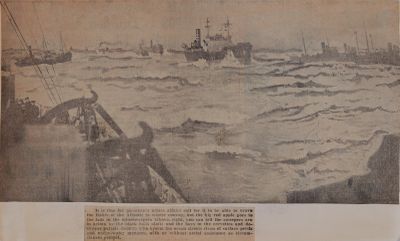