AND on the banks of Newfoundland, too, where Bridget Power—

"Oh, she tore up her petticoats

To make mittens for his hands,

A-saving of her true love

On the banks of Newfoundland!"

God send no need of bonny Bridget on a night like this. It's blowing again, after a lull.

TO-MORROW will be Christmas — if to-morrow comes. On earth peace, good will toward men. They must have meant what they sang, those choiring angels, 1940 years ago. They could not have been mocking, nor mocked. We surely think better of the Highest than that. Their words will yet come true.

We furrow the furious fifties and roaring forties of this grey Atlantic in hourly hazard of a louder crash than those of the smiting seas, and a long whistle and eight shorts calling us all to muster stations and the four lifeboats. We know not the day nor the moment when we may have to face what better folk have faced so often in the twenty-seven months since the Athenia was butchered by the first torpedo. This is less uncomfortable than living in a "peace in our time" purchased by the prolonged crucifixion agonies of races and nations. In fact it is not uncomfortable at all. Anticipation of that louder crash and the nine toots does not involve dread. It induces a sensible frame of mind and that satisfaction which most people feel after making a will—-a satisfaction no one has who puts off that duty.

We embarked on this voyage knowing the best and the worst—-that we shall either be torpedoed or not, either escape by the lifeboats or not. Having looked over our lifeboats and our places therein, mastered the technique of jumping into the sea if it is too rough to lower a laden boat (knees drawn up, arms crossed over lifebelt to keep it from breaking your neck), we go on with the immediate duties of life, which are to make other people and ourselves as comfortable as we can.

SO without premeditation, at least without pre-arrangement, we find ourselves at a Christmas Eve party in the little two by twice lounge. It is the first time, in the dozen days we have been shipmates, that we have all been here simultaneously.

All dressed up, too.

The three American army flyers are beautiful in their soft colored khaki tunics and chamois hued slacks, bright with service ribbons and gleaming buttons—-RAF, for they lost everything that held them together during their inspection of the Battle of Britain. Their navy man, who came aboard in mufti after a losing bout with one of those self-serve English elevators, hobbles in, frail and apologetic, in a U.S. ensign's dark blue and gold, sitting loose on him since his illness.

Lisbon these nephews of Uncle Sam found lousy with the gestapo. They went over by Clipper, two months ago, and their luggage was rifled daily by Hitler's hired men in the Portuguese hotel while they waited for transport to Britain. They are refreshingly enthusiastic over everything British, and modest about everything American. Frankly pessimistic about us holding Singapore, even at this date, or their holding the Philippines—-but keen on getting out east again in time to blow Tokio into Germany.

Among them they have ranged the world pretty thoroughly. They have good words for Igorotes, Moros, Hawaiians, Filipinos, Chinese, and all who wash in the Pacific—but none for Japs. They talk little about the war and a lot of the good time they have had in Britain.

A LA BATTLE OF ATLANTIC

I wear my other suit, and the international banker wears his, but he is outshone by my new haircut in which I take great satisfaction. Short high up, with only enough left to part down the middle.

The coiffure is the inspiration of one of the AA gunners who was a barber before the army got him and sent him to sea. He barbers on board in those rare conjunctions of the planets when (a) he is off watch, (b) it is light enough, (c) it is not too rough, and (d) he has a customer.

In a lull this afternoon he shore me and the first officer of a tanker, who is coming out to get a new ship. We sat, by turns, on an empty orange crate, holding steady against the roll of the ship by both hands gripping the washroom basin. The gunner barber, adopting a Joe Louis crouch, warily walked around his subject, darting with lizard like rapidity whenever the ship was on an even keel, and clicking his clippers with lizard-like noises. The haircut I got was second only in excellence to the blitz yarns he told. So behold me resplendent.

Tanker, as we all call him. looks more like an R.N. junior lieutenant than a freighter's first mate, and has a pleasant choir-boyish voice.

He and the young engineer lieutenant from the Royal Navy, who is also coming out to an unknown ship, make a brave beginning on Christmas carols, but the trouble is we none of us know all the words, and while we have one hymn book aboard and a fair "Seagoing piano, the Tennessee flying captain—bombardier observer in the U.S. Air Corps and patriarch of the air at 43—is the only one who can play, and he doesn't know the keys. He is a wizard on guitars and ukuleles, the most courteous gentleman I have met in my travels. Cherishes one great ambition—to drop a bomb on Tokio before age plucks him from combatant controls. In the absence of the organist he pretends this is a honky tonk and he is the musician. He has monologues and southern melodies and does wonders with the unfamiliar ivories, and we all excel ourselves in the Red River Valley.

The carols thus fade away into

Bless the long and the short and the tall,

Bless all the sergeants and W.O. 1's,

So we're saying good-by to them all,

As back to our billets we crawl,

There'll be no promotion

This side of the ocean,

Uncle Sam's soldiers say they learned this from the RAF in their two months in England, and the RAF told them it was the song that brought the British expeditionary force to and through Dunkirk. The RAF is like that.

The British lieutenant engineer—-rosy-cheeked lad with eyes colored by generations of sea-staring—-counters for the carols with a rollicking tribute to the soldiers' idol, Our Sergeant Major

It's great the way he sings it, and it brings smiles to the patient face of the dignified old Viennese, escaping at last to "mine brother in New York" if the submarines will only permit what half a dozen passport controls have failed to prevent. Poor lady, she has had a hard time getting out of the paperhanger's clutches, and has still a thousand perilous miles to go. But we are all mercifully denied a preview of the next month's tanker sinkings and those poor Chinese freezing in the lifeboats as their torpedoed Canadian ship goes down in the very gateway of our journey's end.

The Polish lady diffidently asks, "Will you not take some wine with me?" and produces a bottle of port.

The U.S. army flyers have old Schooner Days on the spot now, for, though an accredited Short Snorter, he has held out against their insistent hospitality for ten nights in the bar room and he cannot, without making her cry, refuse the lady's thimbleful.

There are tears in her eyes as it is. Poor pani, it is a very hard time for her, Christmas being an even greater home-feast in Poland than in Canada, and it is the third St. Nicholas Eve she and her husband have been so far apart.

He got her out of Poland one jump ahead of the inrushing Huns and half a jump ahead of the inrushing Beds. She travelled most of Europe with that much margin, until at last she got to Scotland. He was wounded in the fighting for Warsaw, but escaped to America, where he serves in the diplomatic service. With the States in the war now he can bring her to New York, if submarines and bombers do not kill her on the way; couldn't get her out of Britain or past Ellis Island before.

Schooner Days knows better than to argue against that catch in her voice, and says, "With pleasure, pani, genkouyia, genkouyia bardzo," and comes back at his Americano competitors with a demand for a solemn pledge that, God helping us, ail ten passengers shall have dinner with him at the first opportunity ashore. La Belle Polonaise laughs at his attempted Polish, even the grayhaired Viennese laughs as we plan the menu and the Banker—with apologies for the language—surprises by producing a sweet tenor voice and some harmless old Christmas lieder in the only language she properly understands.

The good time ripples happily by, shutting out alike the howls of wind and sea outside and the thoughts of planes above and torpedoes below and machine gun and shellfire on the surface. After all, we are beyond the present active bombing range, unless the Japs have taken New York, and the rougher and blacker it is the less chance for a sub getting home either a torpedo or shellfire.

"Sorry I cannot be with you," says the captain mildly, looking in, "but I take this opportunity of wishing you all a Merry Christmas now, and I hope you will enjoy your Christmas dinner to-morrow. Good night."

"Anything before closing, gentlemen?" asks the assistant steward, chambermaid, bath attendant and menu-maker, who is also the barkeep. It is 11 o'clock. The refugees rise, we sing "Good Night Ladies" and Pani Polonia says "Thank you for the evening. Christmas does not now hurt." As they vanish the three-minute moan of the snowhorn tells why the skipper could not stay. The Old Man is never off the bridge in snow, fog, or presence of the enemy. The horn keeps on moaning. Long single blasts, at three-minute intervals. No short eights following.

We men improvise two Christmas cards for the stranger ladies from a combined treasury we have smuggled out of England. We sign both with the same fountain pen (one Major Tommy, of New Orleans, has flown round the stratosphere without having it once boil over) and we entrust them to the barkeep, adding to his next-morning capacity of the chambermaid that of postman-at-sea. Then we discern that we art all jolly good fellows, and assert so in song, the foghorn alone dissenting. And so to bed, as Eight Bells usher in Christmas through the snow.

Next week we shall bring this strange eventful history of the last convoy of 1941 to a close and terminate, if not solve, the mystery of why it should be tagged Schooner Days. 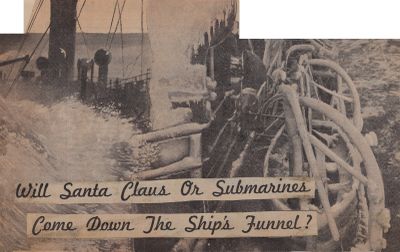