Someone with misguided goodwill toward men got the firemen overloaded, and we couldn't make steam until the skipper took a hand. That was the real reason why he "couldn't be with us" Christmas Eve. The snow was merely a coincidence.

He is a quiet little man. What he did to the offenders nobody knows—-the offenders themselves don't know the worst yet—-but the safety valves are again popping, and we have all the steam she needs now.

Too late, though, to take advantage of the smooth which would have put us a long way across the most dangerous part of our voyage which we have to cover on our own, with our escort gone and all the rest of the convoy making the best of their way to port. With the United States in the war now and the French Atlantic coasts a long submarine factory, from Cape Race to Hatteras will be as dangerous as the Chops of the Channel or the East Coast of England.

ON THE BRIDGE AS

Our mild master had to cure a similar disorder, the black and white ship's cat tells me, last year. The law hobbles a skipper pretty tight, and seemingly the worst he can do is to summon a culprit to the bridge, and there publicly enter in the ship's log stoppage of his pay. Shades of Bully Forbes and all the mankillers of the clipper ship era!

On the occasion referred to by Mrs. Blitz the skipper employed, direct action with fists and feet and the offended offender took him to court for it in Liverpool. At the end of a three-day hearing the Old Man said to the magistrate: "Your Worship, when I am on my bridge I am charged with as much responsibility as you are when you are on your bench. I do what I know is best for the ship, and I would do it to you if you were causing the danger this man was causing. I have lost three days in this court, and I am going to leave now to take my ship out, for she is lawfully cleared to sail on this tide. Send whatever your decision is to my owners."

He pushed a card respectfully across the magistrate's desk and walked towards the door. Ere he reached it the magistrate said: "Case dismissed, with costs against the complainant."

So what he has done to these firemen has undoubtedly been the best for the ship. Hope he does it to the fool who fuddled them.

But why let exposure to submarine torpedoes or gunfire for a needless twenty-four hours spoil an otherwise perfectly good Christmas? Our late banana boat does the whole fruit trade proud by the Christmas dinner the Chief Steward provides. From the time we came aboard the fare hasn't been exactly Spartan. Thank Heaven she is an English ship, and tea is an observed rite. No matter how it blows we all gather for bread and butter and jam and biscuits and tea with sugar and dried milk at 4 p.m. And we have hot coffee, well sweetened, brought at 11 a.m., quite good after the cook broke his can opener prying the lid off his stock pot.

But the Christmas dinner is a true chef d'oeuvre. Grand turkey, plum pudding, mince pie, plus all accessories—hors d'oeuvres, two soups, fillets of sole and poached salmon, asparagus, lamb cutlets, braised ham, cauliflower, beans, potatoes. A Christmas cake, lovely to look at and lovely to eat. Great big juicy oranges and shiny red apples and abundance of Californian nuts-—and turkeys for Christmas were a dollar a pound on the hoof when we left England twelve days ago!

"I feel ashamed to be eating this with the people on rations at home," said Banker.

"I'd feel ashamed to miss it," said Tanker, stoking up for another year.

THREE days later (it does not take that long for us to recover) when the light spreads on a sea smooth as poured lead and strangely quiet after two weeks of tossing, it reveals shores ahead colored like Mrs. Blitz, the widow cat, who always wears black and white. Winter evergreens, dark as rifle uniforms against the snow. A red-faced pilot climbs aboard from a fisherman-model schooner lying motionless in the low frost-mist and disappears in the chart house. The submarine boom opens, and we steal noiselessly up into "an Eastern Canadian port" (as if we had hundreds!) Its angular grey and black and white is quaintly relieved by grim or gorgeous camouflage on the flanks of hundreds of thousands of tons of shipping. There is mauve and pea-green and straw color and cinnamon and purple and azure in the dazzle-paint among the sea-rust and battle grey.

There is not a sound except the harbor gulls crying.

Our anchor descends quietly at our appointed spot, abeam of a large taupe colored freighter whose lines are familiar. They ought to be. For a week she was our next door neighbor to starboard in the convoy. She is the only one of our fleet to make port ahead of us, and like ours, her yellow quarantine flag is still flying, showing she has not yet had time to get pratique from the port doctor.

It so befell that twenty-eight months ago I went across with the first convoy from Canada to Britain. This also got safely through, steaming over the fresh-turned grave of Makeig-Jones and his aircraft carrier Courageous and her thirty-six planes and five hundred men. But of the eight ships of this first convoy four have since been torpedoed, drowning forty-eight hundred men and women and children. One was ferrying refugees. Another prisoners of war.

Yet here we are, safe. Our puny four thousand ton burthen has been brought through the drench of blood and salt water which since this war began has swamped seventeen hundred and thirty-four other merchantmen and swallowed seven million tons of shipping such as ours.

Wherein have we deserved better than they?

This is by the grace of God through the gallantry of British sea and air patrols, British gunners, British sailors, British firemen—-if some do liquor up when they get the chance. Can we not best thank God that we are not as other men or even as those perished prisoners of war by seeking to know and to fulfill the purpose of the mercy vouchsafed us and this freighter moored abreast us? Or is this being sanctimonious?

We can, at any rate, strive to better the lot of the sailor under the Red, White and Blue Ensigns.

We are both lucky to have got in and up the harbor this far, for a big eastbound convoy is majestically coming out, and it will take hours for it to clear the path to our wharf. But a member of the RCAF police, Lieut. McCausland, of Toronto, burly in his horizon blue, makes his way aboard us, and plucks us all ashore, uniformed or not. He is a magician. He finds a Ladyboat for Tanker, which will get him to his new and unknown ship from the Tarantula. He hooks up the young navy engineer lieutenant with his father, a fine old R.N. commander unexpectedly on the station, for though father and son are in the silent service, neither knew the other would be here. And he fixes all the rest of us up for our varied destinations by the same train—-for Toronto, Montreal, New York and Washington. Yes, a magician. The most hospitable welcome I have ever had to my own country, and one I am proud of for our foreign-born guests, be they fighting men or refugees.

Then is fulfilled the pledge of Schooner Days when he sipped the Polish lady's wine on Christmas Eve-—dinner for all hands and whatever they wanted. Curiously, of this globe-girdling company he was the only one who has been in a Canadian dining car before.

Remember, we have all been on English rations and yearn for the eggs and milk and meat and green food of America as yearned the Israelites for the leeks and the melons and the garlic and the flesh-pots of Egypt.

Here are the menus agreed upon—-and executed at a very merry dinner party on a Canadian National diners:

That is what we wanted and that's what we all got from grinning waiters, as the train, blazing, with light from every window, ran toward 1942 through a snow-crowned countryside blazing with left-over Christmas trees gaily lighted and homes bulging with bright lights that knew no blackout.

ALL WELL ON BOARD"

Oh, the sheets were frozen hard

And they cut the naked hand,

Where a seaman scarce could stand,

The wind was a nor'wester

Blowing squally off the sea,

And cliffs and spouting breakers

Were the only things to lee.

Before the break of day,

But 'twas only with the peep of light

We saw how ill we lay.

We turned all hands on deck

Instanter with a shout,

And have her the main topsail

And stood by to go about.

All day we tacked and tacked

Between the south head and the north,

All day we hauled the frozen sheets

And got no further forth.

All day, as cold as charity,

In bitter pain and dread

For very life and nature,

We tacked from head to head.

We gave the south the wider berth,

For there the tide race roared,

But every tack we made we fetched

The north head close aboard,

So's we saw cliffs and houses

And the coastguard in his garden

With his glass against his eye.

The frost lay on the village roofs

As white as ocean foam,

In every longshore home.

And the chimneys volleyed out,

And I vow you'd smell the victuals

As we put the ship about.

The bells upon, the church were rung

With a mighty jovial cheer,

For it's just as I should tell you

How of all days in the year

This day of our adversity

And the house above the coastguard's

Was the house where I was born.

The kindly faces there,

And well I saw the firelight,

Go dancing round the china plates

That stand upon the shelves.

And well I knew the talk they had,

The talk that was of me,

Of the shadow on the household

Of the son who'd gone to sea;

And, oh, the wicked fool I seemed

In every kind of way

To be here and hauling frozen sheets

They lit the high sealight

As the dusk began to fall.

"All hands to loose t'gallantsails!"

I heard the captain call.

"By the Lord, she'll never stand it!"

"It's the one way or the other,

She rolled down to her bearings,

But the sails were new and good,

And the ship smelt up to windward

Just as if she understood.

As the winter day was waning

With the coming on of night,

We cleared that weary headland

And dropped below the light.

And they hove a mighty breath,

Every soul on board but me,

As they saw her nose again

Pointing handsome out to sea.

But all that I could think of,

In the darkness and the cold,

Was just that I was leaving home,

And my folks were growing old. 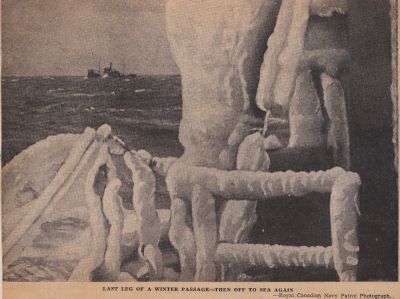