GASKETS off his sails, fly struck for the tug, lines singled up, crew standing by to cast off, for the eighty-sixth trip towards Port Century.

The lake is brown and "roily" with spring freshets and March gales, but as he has so often told us, "It's always blue farther out."

Though he has lost one limb, two brothers, and, hardest of all, his schooldays sweetheart, bride of schooner days, and dearest friend in a long happy life, Capt. John Williams snuffs the air of year No. 86 with all the eagerness of the March colt he is.

On Sunday morning at two o'clock Capt. John Williams, of 57 Islesworth avenue, Toronto, will, please God, complete his 85th year and start his 86th. He was born at two o'clock in the morning, March 22nd, 1857, in a log house still standing but much disguised in the old "Kew," or Kew Beach district. It is within a few rods of his present home, where he will celebrate his birthday, with Mr. and Mrs. Leon H. Watts, his son-in-law and daughter and grandchildren. A fair wind to him for his eighty-sixth voyage, and a happy arrival at Port Century, and a good return with a paying freight; what Capt. Harry Finn calls the "gravy load."

Capt. Williams celebrated his clearance on the new voyage by one more contribution to the British War Victims' Fund. He has made many. This one he thrust into the, hand of Schooner Days as "sealed orders." They will be obeyed.

Capt. Williams' birthday will be the subject of special mention at the Sailors' Farewell service and banquet in St. Andrew's Church, Colborne, Sunday. Schooner Days has also been commissioned to bear a message thither and appreciates the honor.

Capt. Williams' 70 years of sailing ranged from Superior to the sea and from the 40-ton scow Rover, in which he rated cook for his father and brothers, to the 12,000-ton bulk freighter J. H. G. Hagarty, which he supervised in building and commanded with marked success. She was his and his owners' answer to the challenge of the Great Gale of 1913, which destroyed the largest and finest lake freighters before her.

But John Williams has been a schooner man at heart from the 24th of May, 1866, when he trotted barefoot aboard the new-bought Rover, told his father, with all the finality of nine years: "My, but she's a big one, dad," and helped hoist her little pikepole topsail.

His favorite schooner of the half dozen he owned and sailed was the big "old canaller" Sir C, T. Van Straubenzee, shown above as though fitting out for a voyage. (As a matter of fact she was ending one. The drawing was made 40 years ago, when she was drying her sails at the foot of West Market street, preparatory to laying up).

Of his many feats in her, Schooner Days likes best this:--

The Straubenzee was lying loaded at the trestle in Fairhaven with coal for Toronto. The wind was northwesterly and freshening; not an inviting prospect for anyone bound to the head of the lake. The harbor tug, eager for business, nosed alongside, although Capt. Williams had not yet lowered his fly as a tug-wanted signal. As a matter of fact, he didn't want a tug at all. He knew he could make just as good time lying at the trestle as he could bucking a nor'wester, if it freshened, and he hoped he could sail out if the wind canted ever so little, and so save a tow bill.

Twenty-five dollars in and out, the price of a tug in those days, often meant the difference between profit and loss on a voyage. At the same time, Capt. Williams was diplomatic, and did not wish to get into the bad graces of the tugman by a categorical refusal.

"Think I'll wait and see what it does," said he non-committally.

"Sure, captain," said the tug man, "it's blowing right fresh as it is, and you may have to come back if you do start now."

While they talked a sail grew rapidly on the northern horizon. It was a little two-master coming over from Kingston, and not making very good weather of it. She was steering wild, either from too much sail or too little. The tug man looked at her sourly.

"Never takes a tow if he can help it and owes me for the last three times as it is," growled he.

"Well, we all have to go without what we can't afford," said Capt. Williams dispassionately, "but you can't blame him for sailing in when he has a fair wind, can you?"

"How'm I going to live if they all do that?" countered the tug man.

Just when the two-master was shortening sail at the pierheads— Fairhaven has a harbor bigger than Toronto's, a lovely sailing basin, but the entrance is between two narrow piers projecting into the lake—-the stranger wobbled in her course, missed the lee pier and ran in on the wrong side of the entrance. She tried to turn back but soon she was aground on the lake beach, helpless. If the wind increased to gale strength she would break up. Even if it did not she would twist her back in a few hours, bumping on the beach.

Down came her fly for the tug at once.

"Im not going out after him now," said the tugman.

"Because he owes you money?"

"But he may be in a hundred pieces before then, objected Capt. Williams.

"Well, jerk him off yourself if you feel that way about it."

"You mean you'll lend me your tug?"

"Not on your life!" said the tugman.

"All right, all right," said Capt. Williams quietly. "I hope I haven't hurt your feelings, but now that you've mentioned it I think I will try to pull him off myself."

"Why you can't even get out of the harbor without me—-" began the tugman, but his conversation was interrupted by a series of rapid-fire orders to the Straubenzee's mate and crew. "Run that springline ahead and give her a shoot! Get the kedge ready and we'll haul off to it! Get the covers off and make sail!"

The Straubenzee had a steam donkey engine for hoisting sail, and by heaving with this on the spring-line they got her started from the dock, and then dropped the kedge out in the harbor and hove her out to it. Then they hoisted the three lowers, ran the kedge to windward again and hove it up, setting the four jibs at the same time and canting her off with the raffee aback. She gathered way slowly, being deep in the water with her load, but to Capt. Williams' great joy she looked boldly for the lake through the needle-eye of the piers, and kept on going.

She had to go out in that one tack. There was no room for maneuvering in the piers. So out she went, increasing her speed with the increasing wind, so that she shot the spray in great sheets from her bluff bows when she felt the smacking of the lake rollers.

That maneuver would have been pretty good for any yachtsman. But in the next trick Capt. Williams showed himself the master mariner.

He stood out until the deep Straubenzee was well clear, then rounded her up well out in the lake and dead to windward of the stranded Kingston vessel on the beach. Then he gave her both anchors, spread wide apart, and veered out cable until the Straubenzee had backed down with the wind and was much closer to the helpless vessel, but still to windward of the entrance. Next he lowered all sail, and sent his yawlboat to the wreck with a messenger.

That word has two meanings, a man with a message and a rope meant to bring another rope; both kinds of messenger were in the yawlboat. The lake was not yet too rough for the yawlboat to work in, and the distressed schooner captain was prompt in co-operating with his boat and the best hawser he had. Soon the two schooners, big and little, were hooked together with almost a quarter of a mile of manilla, hove taut as a harpstring on the capstans of both vessels. As either rose in the sea the line would hum with the tension and relax in the dips.

Satisfied that the gear would hold, Capt, Williams next gingerly began with his donkey engine on his two anchor cables, with a leadline over the side to tell him whether the Straubenzee was going ahead or the anchors were being brought back home. Inch by inch the Straubenzee hauled herself lakeward. Inch by inch the connecting hawsers stretched bar-hard, vibrating with the strain, but with relaxing intervals. Either that schooner was being pulled apart or she was coming off the beach!

It was the latter. Inch by inch her bruised keel was dragged over the sand and shingle of the bottom until she was almost afloat. And still the Straubenzee's anchors held. Then the lines were bighted so that the little schooner's windlass and capstan applied its pull at her end, and the Straubenzee's donkey and capstan worked at hers, and she came clear. They hove the Straubenzee out to her original anchorage, and brought the smaller vessel under her stern. She was to windward of the harbor entrance again, and the Straubenzee crew helped her make enough sail to take her in safely. She was not leaking badly. She cast off, and in a few minutes had shot through the piers without trouble and was mooring at the trestle, while the tugman's face was a very dark red.

The Straubenzee hoisted sail once more, hove up her well tried anchors, and started the long beat for Toronto. But the wind, baulked of its prey at Fairhaven, and approving a good deed smartly done, canted around to the southward before long and gave her a good run up.

"What was the name of the vessel you saved?" Capt. Williams was asked on his birthday eve.

"I don't remember. She was a little thing, like the Acacia or Julia or some of those smaller fore-'n'-afters that used to be plentiful at the foot of the lake."

"And, who was her master? He must have been grateful."

"Never knew his name, though I've seen him before and since. He was a little dark fellow with earrings, as I remember."

That was Capt. Johnny Williams always, through his seventy sailing years. Always ready to do a good turn to anybody. Never curious even to know their name.

"You see," is his explanation with a twinkle in the grey eyes always seeing the blue farther out, "I never knew when it might be my turn to need help myself."

But no vessel of his was ever wrecked. His only stranding was when the little Rover got aground trying to run into the mouth of the Rouge and he swung ashore to his father's waiting arms on the fore peak downhaul.

RUNNING HOMEWARDS, J. H. Wilcox fine picture, and Capt. Williams' Christinas card to Schoooner Days, so well expresses the buoyant spirit of that gallant lakeman that it is here reproduced in birthday greetings to him with the world's best wishes. 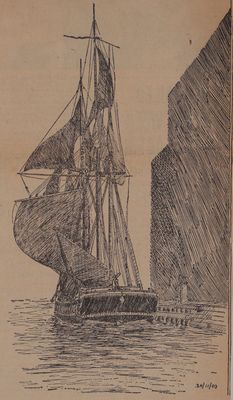