THE BOYS are outward bound again.

You can keep it up to the first one-way funeral, for there is grandeur in being outward bound over Jordan. A great country lies on the other side.

MANY have started already, this spring, for many lakers have gone to salt water, and the lake men have followed them. And many have tried to get into the navy, and some have got there.

The winter broke early, never quite got here as a matter of fact, and Cat Hollow and Hen-and-Chickens and Hardscrabble and Knock Nelly and Sodom-and-Gomorrah and Christian Street and a hundred more places like them (which you've never heard of and never will) have sent their boys and their skippers and their engineers to the lake ports to fit out.

Of the thousand vessels that ply the Great Lakes at least a hundred are already breaking the drift ice and some have delivered their first cargoes.

IT'S a good time, outward bound time, and a good feature of it is these Mariners' Services. They are not an ancient traditional rite, like harvest home or the Harbourmaster's Hat for the first in. Old or new, they have sprung up spontaneously in Prince Edward County and the Georgian Bay ports and Toronto and Colborne and maybe the Welland Canal, from the sailors themselves. Old Capt. Palmateer, and Capt. James McCannel of the CPR, also lately gone, Bert Preece, superintendent of the Toronto Terminal Warehouse, and Capt. Charlie Redfearn, very much alive, have been movers early and late. And, to give credit where credit is due, Phil Dodds, of the Picton Gazette, a hustling young newspaperman and county representative, a tower of strength to Prince Edward in this and every other public enterprise. And others elsewhere.

MARINERS' SERVICE, it is called in some places, Sailors' Farewell, in others. It is a good Ontario product like the maple syrup which comes at the same time. It will continue to be good until some mistaken zealot radiofies it into streamlined conventionality.

EACH service is the same, all are different. The churches give lots of helm and a full head of steam. Pewholders waive vested interests. Everybody is welcome, and the fire chief, if any, never counts how many feet stick out of the windows.

People come from miles around, in whatever will roll on rubber or shoeleather, or the old narrowgauge steel tire.

The departing sailors are always in a vast minority. The young captains and mates, engineers, wheelsmen, firemen and deckhands and oilers and watchmen are a little uncomfortable in the suits they bought new last fall and won't wear again until next winter, when they'll be out of fashion, from what they hear about clothes rations. They never wear their "good" suits on board, and if they have uniforms they only wear them to this service if they are "on the bridge," that is, taking part.

The weatherbeaten older men, frosty but kindly in their post-seventies, will be reluctantly seated in the front pews, looking around anxiously for their families elsewhere, or for So-and-so or Such-a-one, whom they haven't seen since the last service, and then it had been forty years since they were shipmates together.

These are the old-timers, retired years ago by rigid company rules or their own prosperous industry. Even ten years ago all such had started in schooners. Now the schoonermen are scarce, for sail grows no second crop.

DECORATIONS all run to pattern, but they, too, are different in each place. Ship's flags, of course, and the Union Jack, and the Red Ensign of the merchant marine, surely. Perhaps a shining brass binnacle and compass. Port and starboard running lights and model lighthouses, all carefully wired by amateur electricians as a labor of love. Maybe a ship's bell, to be struck by diffident boys in the flappy costumes allocated to the navy.

Maybe there'll be oars and nets—-should be, if fishing is an existing industry. Sure to be ship models, some fine, some terrible, and ship pictures, ditto, ditto. The best are the careful crayon portraits men like Charlie Gibbons drew of the old schooners. Some of these are in oil, and very good.

AND there will usually be a particular relic, from the war, or some famous old ship, like a wrecked vessel's nameboard. One popular this season and last, which has gone from place to place, is the red and white barred "answering pendant," of a British steamer that was machine-gunned and bombed by a German plane, and got the Heinie on the third bounce with her ship's tail gun. The bomber dropped two eggs, which slid overboard. One left its vane or guiding fin in the deck, and this twisted fragment of painted steel travels with the flag.

The flag was shot full of holes when the bomber machine-gunned the deck. The captain on the open bridge just shook his fist, and sang out to his gunners to get him this time or take their gun with them overboard. So they got him, and the captain gave the fin and the flag—-its bullet holes are now neatly embroidered, in red—-to help the British War Victims' Fund.

They did, at Cherry Valley last year and they will be in evidence at Cherry Valley again to-morrow, when this year's Mariners' Service will be held. He had raised $30,000 for Spitfires by showing these "medals," and since he sent them to The Telegram and they have been shown around nearly a million dollars has been added to the fund—-not, of course, all through their influence.

Prince Edward County has held back its farewell service this year so as not to interfere with the Easter services anywhere, or the mariners' service at Colborne, where the United Church sportingly shut up shop for the evening and carried chairs over to provide extra seats in St. Andrew's.

THE MINISTERS are always most helpful. They yield their pulpits graciously to unordained occupants. Sometimes they preach a short sermon themselves, sometimes the sermon is swamped under a tidal wave of reminiscence, ancient and modern. But the point is always maintained that this is Godspeed to men going down to the sea in ships to do business in great waters.

The church choir, rehearsed to the point of perfection, sometimes by the minister himself, breaks the spate of words with solos, quartettes, duets and hymns.

No one fails to join in "Jesus, Saviour, Pilot Me"' and "Eternal Father, Strong to Save." There will be a roll call of those mariners who have finished their voyage—-on the lakes, on the salt sea by submarine or bomber, in battle, in the air, or on the home farm their industry has kept thriving. "Be of good cheer, my masters, we are as near Heaven by sea as by land." Flowers will be offered in their memory, accepted by the oldest of the captains present, and sent to the sick.

The collection plate, terror of all front benchers, will make its round. It will come back heaped beyond recognition. There will be simple and earnest prayer; perhaps more singing. These boys, first trippers or old timers, are going out into danger, into temptation, into triumph. They need, spiritual armor as much as cork lifebelts.

Before the minister or pastor pronounces the benediction, all will mingle their voices in:

Till we meet at Jesus' feet,

God be with you till we meet again."

In cold print it may look trivial, a jingle. In the stately measure of the long-drawn soaring and falling syllables it is a paean, a prayer, a pledge. The boy who shovels in his first glory-hole with that ringing in his heart, the master who fights Lake Superior, sub, or bomber, with that singing in his soul, will, whatever happens,

Break on the Golden Shore."

From country churches such as this, so decorated (Cherry Valley United, in Prince Edward County), or stately Trinity United in Toronto, sailors fare forth for the season's dangers and triumphs with "God be with you till we meet again" ringing over the waters of memory. 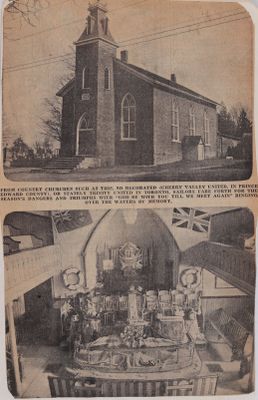