SIXTEEN-YEAR-OLD Tommy Scott, horse boy on the Welland Canal, came to the end of the Long Level at Port Colborne with his team that Monday afternoon, bone weary and dog tired. He had tramped every foot of the fourteen miles of muddy towpath since morning, fighting against an October gale so strong it threatened to throw him and his horses into the canal. Sometimes when the old timber drogher he was towing up, riding light and high as a haystack, took a sheer in the puffs he had to anchor his steeds to keep them from going overboard while he himself helped the schooner's crew check her with the snub. It was the hardest tow he had ever had on the raging canal, and it was with a great sigh of relief that he unhooked at the guard-lock and left the drogher to heave through by her own windlass and capstan, and drove his dripping horses to the big stable.

This was in 1870, when the second or "Old" Welland Canal in lake language had twenty-seven locks, like steps in a weary winding stair, and mules and horses, owned by tow firms or the vessels themselves had not been displaced by the new steam tugs. The present eight-lock canal is No. 4. Tommy Scott worked for Muir Brothers, Port Dalhousie shipbuilders and timber merchants. While his older brother William "served his time" as carpenter's apprentice Tommy drove horses and awaited his turn for apprenticeship.

On the way to the stable Tommy was halted by a sailor who came running.

"Give us a hand!" shouted he. "She's breaking up and the spars'll fall any minute. The Old Man has sent back for a fresh crew, for the boat's been capsized for the third time!"

"Who's breaking up and who's your Old Man?" asked Tommy, far from disrespectfully, for Old Man was and is the highest marine title in use among the initiate. It is like Excellency, Majesty, or Serene Highness. It was the treasured title of every vessel captain, be he nineteen or ninety—-and some were, in schooner days.

I'm in the Hippogriff of Buffalo, and Bill Noble's our Old Man," said the sailor catching his breath. "The Mary Ann Rankin's ashore under Sugar Loaf Bluff, and breaking up. Her crew have been in the rigging since midnight. The cook, poor woman, she's been washed ashore, drowned, and she leaves three little orphans, motherless and fatherless."

"Sure I'll come," said Tommy Scott, "but first I've got to stable these poor beasts proper, or they'll die on their feet."

"I'll round up some more of our crowd," said the sailor. "Perhaps you can steal a fresh horse or two from the stables to get us up the shore. It's near three miles. Meet you here in fifteen minutes."

He was off like a shot to where the Hippogriff's tall spars showed in the leafless forest of masts near the elevator. In fifteen minutes he was back with every additional man who could be spared from her crew. Tommy had rubbed down and blanketed his own horses, filled their feed boxes, and hitched another nag to a light wagon he found unattached. So west they plunged, in a cloud of flying October leaves, scattering the beach gravel as they went.

TOMMY learned the whole tale to date in the short ride. The Mary Ann Rankin, two-masted schooner laden with wheat, corn and fish for Buffalo, had struck on the reef under Sugar Loaf Bluff at midnight in the gale. Her crew had taken to the rigging and still hung there, dead or alive. The cabin was washed away, and with it the cook, a Mrs. Brown of Cleveland, a widow who supported her children by working in the lake schooners. One of the boats of the propeller Young America had been used as an improvised lifeboat, by sailors from the fleet sheltering in the harbor. Twice it was thrown ashore, unable to reach the wreck. The third time it was hauled farther on a wagon and John Crangle, mate of the Cleveland schooner S. J. Hailey, lying at the elevator, Alex. McGregor, a young Port Colborne giant, Johnny Mills of Racine, a sailor from the Hippogriff, and a big blonde named Samson or Simpson, from the Oswego schooner Daniel G. Fort, manned her. They weren't sure of the yellow-haired sailor's name, and he was either an Englishman or a Norwegian.

They had pushed off from above where the wreck was lying. The sea bore them down under the bows of the schooner, but the men in the rigging were too numb to catch the line hove to the vessel, or to throw a rope to their rescuers. While the boat lay alongside the wreck to leeward a great sea burst and upended the little craft, turning it over lengthwise. Crangle clung to the bottom, and righted the boat, but his shipmates had been killed or drowned. Again the boat was capsized, and again he righted it, but it was full of water and unmanageable. It drifted in a mile below the wreck, with Crangle clinging to it. A human chain from the crowd on the beach ran into the breakers and dragged him out, more dead than alive.

Capt. Wm. Noble, of the Hippogriff, was on his way up the beach with his schooner's yawl on a wagon when Crangle was brought ashore. The failure of the third attempt and drowning of three good men in it disheartened the weary crowd, and Capt. Noble could not get anyone to man his boat for a fourth try, so sent back to his vessel and got his second mate, Denwick, three sailors, and our horseboy friend, Tommy Scott.

Can you swim?" demanded Capt. Noble of the stranger, as the reinforcements arrived.

"I can pull an oar and I can bail," said Tommy.

Noble wasted no words. Up the shore they dragged the yawlboat on the wagon until she was well above the wreck.

"In with ye," said he, and the accompanying crowd ran the loaded boat out into the breakers, neck deep. Tommy had plenty of bailing to do at once, for the spray shot high above their heads. But Capt. Noble was a good coxswain and he had his own boat and his own crew. She swam the billows like a duck, and worked up and made fast to the wreck without capsizing. After that it was a matter of nice judgment easing off and heaving in on her painter, but she lay safely while the four survivors—the captain, mate, and two sailors—were, one by one, hauled aboard by lines thrown to them. One of the sailors was unconscious, and was just so much dead weight. As the boat cast off and ran before the seas for the beach the masts fell, and the wreck burst apart, and the wreckage followed the boat in. The crowd on shore rushed into the water and landed the yawlboat safely.

BACK TO HIS HORSES

"IF you don't need me any more I'll go back to my horses," said Tommy Scott.

"I'll need you more, son," said Capt. Noble, "for if you've got horses I've got a schooner that needs towing through to Lake Ontario."

So early next morning, that crisp Tuesday, Nov. 1st, 1870, Tommy Scott, after a good night in the stable hay, hitched his refreshed horses on to the big towline of the schooner Hippogriff and the long climb down to Lake Ontario began.

But it was interrupted by more than a mere twenty-seven locks. On one level a man in a buggy with a black horse came racing along and overtook the schooner as she was entering a lock. He was Capt. E. P. Dorr, of Buffalo, the big vessel-man who had his name on the sternboard of one three-master and on the registry papers of several others.

"Keep your lines on the spiles!" he called to the Hippogriff crew. "I want to see the Old Man."

"What do you want with him," asked Capt. Noble.

"You know very well, Bill," said, Capt. Dorr, an old acquaintance, "And I know very well, for I started up from Buffalo with a lifeboat yesterday, and found you had done me out of a job. James M. Smith, of Buffalo, owner of the Rankin, has authorized me to look after those children of Mrs. Brown's until they're grown up, and to see that their mother and the three men who were drowned have a decent burial. Johnny Crangle, who wasn't drowned, is here with me in the buggy, and I'd like you to let me bring him aboard."

"Come into the cabin, both of you, and don't stand on ceremony," said Capt. Noble, and in they came.

"Now," said Capt. Dorr, "can you I call in your crew you had with you in the yawlboat?"

"Every one," said Capt. Noble, "for they're all aboard except the horseboy, and he's right there on the bank. He volunteered, and he and his horses are towing us down. TOMMY SCOTT!!!"

Tommy tied his team and hurried aboard.

"Well, then," said Capt. Dorr, "I'm only a vesselman like yourself, and I can't make speeches, but you know what you did, and no sailor on the five lakes but is proud of you."

He opened the little black satchel. "This for you, Capt. Noble, with Mr. Smith's appreciation and grateful thanks," and he handed out a big gold watch, shining like the setting sun that was pouring through the cabin windows. It was all "chased and engraved" as the catalogues say, and had an inscription cut in beautiful letters on the back.

"And this for you, Mr. Second Mate," and he brought out a wad

TWENTY-SEVEN years later there was a "pleasing function" as such things were then called, in Hamilton. Tommy Scott, developed into Mr. Thomas Scott, ship carpenter and house builder, a man of substance and family, was presented with a parchment by the Royal Humane Society. The Oddfellows and Wm. Gibson of Beamsville, member for Lincoln, had heard of the long-ago rescue and interested themselves in securing recognition for the Canadian who took part in it. The scroll read:

"For heroic conduct in saving life on more than, one occasion, notably for his bravery in taking his life in his hands and with others volunteering to go to the rescue of four men and bringing them safely to shore off the schooner Mary Ann Rankin, wrecked on Sugar Loaf Point on 31st October, 1870. The lifeboat having previously made three attempts without success during a heavy southwest gale, in the last attempt the boat was turned over and three men drowned."

AND why bring all this up now?

Because a Toronto lady appealed to Schooner Days for the schooner Mary Ann Rankin's description. He answered as well as he could, and asked why she wanted to know. She explained that she was making a coverlet for her younger son, Andrew Thomas McLeish Scott, a technician in Massey-Harris, and she thought it would be nice to have a picture of the schooner from which his grandfather, Thomas Scott, helped rescue the crew and got a parchment. She had already made a coverlet for his older brother, embroidered with pictures of the steamers his father had sailed in. Her husband, Wm. Scott, son of the original Tommy, has gone back to steam with the Colonial Steamships and is 2nd mate in the McKellar. His uncle, Mr. William Scott, who was apprenticed to Muir Bros, in 1870, became Deputy Superintendent of the canal where his brother drove the horses so valiantly.

ONE OF THE CAST IN THIS LAKE DRAMA—Schooner DAN'L G. FORT, built in Tonawanda but hailing- from Oswego, where she ended her days as shown. A sailor from her, a brave unknown stranger, was drowned with two others in the volunteer lifeboat's third attempt. 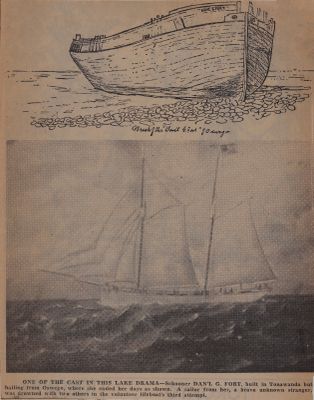