(a) Fourteen miles east of Toronto. That used to be the mileage when Port Union was on the passenger timetables.

(b) For the last ninety or one hundred years, which of course goes back before the railways were born.

(c) Because pioneer farmers and merchants of three townships united to form a harbor company and build a wharf for their common use at the end of the town line between two counties.

IT was with a dark design that little was said geographically about Port Union when spring's arrival at that ancient anchorage was mentioned last week. Schooner Days wished to learn how many had ever heard of the place before the article was printed. Many readers may be more familiar with Port Union of to-day, and perhaps with the Port Union of the old days, than the humble scribe. But not one who was questioned had any idea of where the "port" was, except a young Englishman, a namesake of Peter Dawson's, who said, rightly, that he thought he had seen the name from the train somewhere between Toronto and Montreal.

All of those questioned have or had motor cars, and as Port Union is not on the road maps we used to get at the gas stations, nor on the present railway timetable maps, they had never seen it nor its name until they read it in The Telegram.

(Never mind, Port Union. They said the same of my own honored birthplace, Sherwood, though it did have a filling station when I was last there.)

THE WATERTANK was the only beacon Port Union ever had. Lake Ontario's tawny banks of clay are high enough, after the Highlands of Scarboro have died down at Centre Point into a minor series of hogbacks, for the Grand Trunk water tank to show up against the skyline. It is Port Union's only beacon now, although it is half a century since the port had any claim to be a port.

But the port was a port before it had a railway or a watertank, and as already said, that goes back almost a hundred years. In 1843 William Edwards and William Henderson, of the neighboring village of Dunbarton, cut the channel through from the lake which turned Frenchman's Bay, five miles east of Port Union, into the port of Pickering Harbor. They used a sort of elevator worked by horsepower for the dredging. Schooners came up to the present culvert of the C.N.R. tracks, which was then a stone bridge at the head of the bay, where a wharf and warehouse was built.

This may have been in opposition to Port Union, or Port Union may have sprung up as a rival to Dunbarton's enterprise. Whatever the order of these two ports coming into being, they were closer in time than they were in geography, and the time of both waS the early 1840's. The farmers of the adjacent townships of Scarboro and Pickering (old Edinburgh township), separated by the town line between York and Ontario counties, joined forces with farmers and merchants back in Markham and formed the Scarboro, Markham and Pickering Wharf Company, a favorite form of pioneer enterprise.

They had no natural harbor to develop, but they had enough business for one. They had to import their livestock, farm implements, nursery stock, hardware, sugar, salt and drygoods, by way of either Toronto or Whitby, and this meant a heavy haul from either centre to the farms along the lake shore or back in the bush.

It was a long day's drive to town with their grain, potash, pearlash, logs, lumber, cordwood, shingles, tanbark and other products of the soil which they wished to sell, and another long day's drive back with what they had to buy. So they picked upon a spot at the end of the dirt road between the two counties, roughly half way from Whitby and Toronto, built a wharf there and said, in effect: "Bring what we want here and we will bring what you want there."

Sort of lakeside market. It worked, never perfectly, but with a fair degree of success for its time. The time soon changed, for the extension of railways answered the problems of haulage both by water and by road.

Before the first railway train came snorting along the lake bank, spouting sparks from its cordwood fuel over beach and bush, the united yeomen had their "port" in action. They built square cribs from the 200-foot pine trees growing on the shore, completed the first one at the very edge of the water, and filled it with stone. The next they hauled out till the water was up to the horses' bellies, and anchored it with poles and sank it by filling it with more beach stone. The next they had to pole into position and anchor and fill, and so on, until they had a series of long stone-filled boxes projecting into the lake in a line about fifty yards long.

Where the outermost crib was sunk the water was not more than twelve feet deep. They decked this like a bridge and built a storehouse at the lake end and another on the shore. The lake bank, which has since receded 75 feet or more, at this time dropped gently down to a beach of sand and gravel.

The Grand Trunk came through from Toronto to Belleville in 1856, and Port Union was probably an original stop, because the Scarboro grade involved water for the engines-—and a watertank.

By 1869 the railway had made the town and maimed the port. There was a population of one hundred, with no wharfinger mentioned among the principal inhabitants—-but several railway men. The first official mention of Port Union, in Lovell's Directory of 1857, gives "Port Union, Canada West," as a small place with a population of "about thirty," including Wm. Helliwell, wharfinger; Wm. Heatherston, hotelkeeper, and Robert Williams, contractor.

There was still an in-and-out trade from the wharf, small vessels calling for apples, flour, grain or tanbark or to land farm animals or young fruit trees from across the lake, or bales of rags for Kirkham's shoddy mill. This was not a Port Union industry but worked a mile away or more, on Highland Creek.

Capt. David Reynolds, of R.C.Y.C. ferries, dead these many years, used to tell of loading tanbark in 1871 at Port Union, in a little schooner called the Clifton; and Capt. John Williams mentioned recently seeing the Highland Chief, a larger schooner, loading fieldstone at Port Union. It had been dumped over the bank by the owner or his neighbors, and she did a little trade carrying it to Toronto. She perished in this, rather curiously, as will be told next week.

Mrs. Carson, still a resident in Port Union, recalls the ancient apple trade, and steamers calling for excursions for Toronto or Hamilton, and moonlight dancing with a band. Great quantities of cordwood were delivered at Port Union to fuel the locomotives, and there was a yard for single-cutting the logs and storing the wood for shipment to Toronto. Many schooners had a part in this trade up into the 1880's. 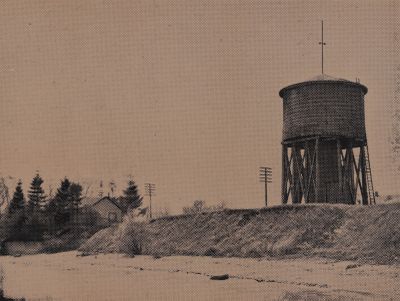