WE left Port Union three weeks ago, basking in the lilac and apple-blossom haze of its hundredth spring, while we followed the fortunes of the Highland Chief, and found fault with The Lone Shieling and also much to praise. Hastening back now we can hardly find, the tiny hamlet on the lake bank a mile east of Highland Creek, so deeply has it become embowered in the leaves brought out by the moisture of Mays. The June hay is almost as high as that beacon water tank which has been the port's landmark for eighty-six years. Long may both flourish.

Port Union, within fourteen miles of the big city, has always been "pure country." It was thus when the farmers and merchants of three townships formed the Scarboro Markham and Pickering Wharf Company, built a wharf, and brought the port into being, and it is now, with wharf and wharf company long departed.

The storehouse, at the shore end of the pier, was so constructed that farmers could shovel their grain into its bins from the level of the foot of the highway at the top of the bank. There are old memories of the well-fed teams standing for hours, switching away the flies, on the highway or town line, all the way down from the Kingston road, while wagon after wagon backed up to the open door of the granary, and men below ran the grain out in wheelbarrows to the vessels trying to load at the wharf, while the wind permitted. The storehouse on the outer end of the pier was for apples, of which there was a large export, or for perishable goods arriving.

A house for the wharfinger was probably Port Union's first habitation; it may have been the bunkhouse of the men who built the cribs and wharf. William Helliwell was one wharfinger, so appearing in Lovell's Canada Directory, 1857, the first official mention of Port Union discoverable.

THE MAN WHO KEPT THE WHARF

William Helliwell was a son of Thomas H. Helliwell, who emigrated from Toughstone in Yorkshire, in 1818, and settled in Toronto, where he established a brewery, carrying on that business until his death in 1825. The business was afterwards carried on by his sons. In 1847 the premises comprising a brewery, distillery, grist mills and dwellings were burnt down, and the partnership was dissolved, William removing to Highland Creek, where he built a grist mill, which he operated until 1880. He was formerly a captain in the militia, and was out with his company during the troubles of 1837-38. His Highland Creek grist mill was within a mile or two of his Port Union wharf.

We wonder if Harbormaster Helliwell kept books, and where he left them? He was a true pioneer and used to tell of the bears and deer that came to his Highland Creek mill. He once met a bear at the Don bridge.

Perhaps a blacksmith shop was Port Union's first "industry," for a forge would be set up for the ironwork of the wharf, principally spikes and driftbolts, and when the wagon line-up began there would be work for a smith on toecaulks, tires and horse shoes. The 1857 population of "about thirty" and the presence of a hotelkeeper and a contractor, Robert Williams, among the select, indicates the arrival of the railway.

We forget sometimes the influence the farmer had on early lake navigation. Such schooner names as "Farmer's Daughter" and "Jolly Farmer" in old registers are reminders. The farmer sometimes built a schooner on the foreshore of his farm during a winter, to use up the ship timber cumbering his acres, or to be sure of transport for the grain those acres grew. Many wharves in the Bay of Quinte and some on Lake Ontario, came from farmers' individual enterprise. Port Union was the result of the united efforts of three farming communities between 1840 and 1850.

Farmers included in a later Port Union census (Ontario, 1869, and Dominion, 1871) are Andrew and, Levi Annis, a family long resident in Scarboro and still occupying a frame house in the village and a stone farmhouse outside it; Alex. McDonald, J. Mitchell, R, Neilson, Isaac Chester, T. G. Dudley, Thomas Adams, Thomas Chester, James Richardson. It is not likely that they all lived in the little village. Their farms, as in the case of the Annises, surrounded it. How many of these were among the sturdy promoters of the Scarboro, Markham and Pickering Wharf Company?

Quite possibly Adams, or his grandfather was, for in the early days—1808—"Uncle Tommy Adams," as he was known by his own preference, came to Canada from Vermont and settled between Highland Creek and Port Union's future site. He built a log house overlooking the lake, and later a brick one. It was struck by lightning in 1832, and his son William was killed.

Possibly the same was the "Thomas Adams, an American Dutchman," carpenter and mariner who came to the Port Union vicinity about the time of the War of 1812 and built a schooner in the mouth of Highland Creek, in partnership with John Allen, She was called the Mary Ann. His son James was one of the owners of the Highland Chief.

The new Port Union was at its peak in the early 1870's. It had two hotels in 1871, Joseph Moon's, to the west, since burned, possibly Heatherston's or Herrington's originally, and the first hotel built. And Thomas J. Laskay's, built in 1860 or the year before, by a man named Stoner.

Laskay came to Port Union to operate the cooperage, prospered, and bought Stoner's Hotel while it was fresh from the painters' brushes. One wonders at a metropolis of one hundred inhabitants, including the farmers of the surrounding country, requiring two inns, but that was a common thing in Canada seventy years ago. Port Credit, little larger than Port Union, had five at this time, besides a large Sailors' and Fishermen's Boarding House, as it was then called. Hostelries were necessary in those days of slow travel, when the scattered farmhouses, built well back from the road, rarely had a guest room, and often slept three of the family in each bed. The railway, the "town line," the steamers and the schooners all brought transients to Port Union, the railway crews required accommodation, and the farmers waiting to unload or to team their purchases back home all needed a place to eat, drink and sleep.

GAIETY FROM CITY AND SIDE-LINE

Laskay's Hotel, much changed, still standing, but unrecognizable as to its original purpose, is now the home of Secor Johnston, in the Claims Department of the provincial Hydro Electric Commission, a grandson of Thos. J. Laskay.

The interior has been remodeled into a charming modern dwelling, with a gracious lawn and garden and driveway sweeping around it where once the farm horses gnawed their hitching posts or mangers.

The original hotel had a two-story verandah with four pillars, a paneled timber front, and clap-boarded sides and back. The kitchen ran across the back, under the ballroom.

Just as in summer Port Union wharf was visited by steamers calling for farmer folk's excursions to Toronto and Hamilton or for moonlight dances, so in winter Port Union had become a social centre, with long lines of buffalo-robed cutters matching the fall trains of grain wagons, and the youth and beauty of three townships tripping the light fantastic by the light of coal-oil lamps with belles and blades from "the city." The driving shed and stable on the east side of the hotel would be crowded with steaming steeds.

On the ground floor was the bar, not large, the dining room, sumptuous for its time, and the stairway. Above were hallways and six bedrooms accommodating twelve travelers. The original paneled front of the building remains, and the eighty-year-old plaster of the upper verandah roof is still sound. The end walls have disappeared under asphalt slates.

William Hemming kept school, though where the school was is at the moment unknown. Carleton Kerr found employment as a gunsmith. The cooperage of Robert Gibson and the blacksmith shop of Reuben Stephen and the cordwood yard were the three modest industries of the place.

By including the surrounding farmers, the population of Port Union held at a hundred for almost a generation, but by 1895, when the wharf had been washed away and its storehouses had fallen down, and the flow from the farms to the cities had begun, a more rigid census commissioner could find only 43 inhabitants. Thirteen years later the century mark was again attained, probably by more generosity in the radius of the circle. When the summer cottages south of the Kingston road are filled perhaps the same result could be obtained in 1942, but that is a vaster Port Union than the Scarboro, Markham and Pickering Wharf Company, bless them, ever envisioned. Their little metropolis was laid out in three modest streets in a tiny triangle formed by the gore between the York-Ontario town line, running north and south, and the ancient Grand Trunk trackway, here running northeast and parallel with the shore. Cherry street was the east and west, or base, of this triangle, and the Port's north boundary. It had eight lots on its south side. These backed up on to six lots which fronted on the north side of Orchard street, which was parallel. This left a tiny triangle indeed between the Grand Trunk station yard, Orchard street, and an unnamed street which was probably called Station, and ran from the station yard to the town line at an angle. The triangle was divided into five lots, making a total of nineteen in the village.

LOOK NOT FOR IT NOW

The wharf which gave the port a name—and existence—ran from the end of the town line at the lake bank, not due south, but southeasterly, so that it was all in Pickering Township, as was the village and railway station.

This wharf has completely disappeared, although one can find the large stones which filled its crib; and possibly remains of the cribs themselves, when the lake water is smooth and clear. Farther east, and opposite the old Grand Trunk property, are the timbers of what looks like a wharf. It was only cribwork protecting the intake pipe for the water tank pump from the ice, with an anchor-crib with sloping face to meet the onslaught of the seas at the other end. On the bank above the steam pump drew water from the lake and filled the tank for the locomotive boilers. This pump also supplies the station well, which is the "town pump" for Port Union's small but precious population. Good goods, you know, come in small parcels.

THE OLD HOTEL OF EIGHTY YEARS AGO, WITH ITS LONG STABLE AND DRIVING SHED becomes a stately modern residence, the upper verandah turned into a lovely sunroom with the original plaster ceiling intact.

The pneumatic tired bicycle appears to have come in, but just how the gentleman is performing on it beside the fiddler is lost to history. The group on the old station platform well from left to right, Thomas J. Laskay, hotel keeper; Station Agent Sullivan, Telegraph operator Thos. Carson, later station agent; unknown resolute with folded arms, and unknown lady, seated; Postmaster and Pumpmaster James Pratt; his brother, Wm. Pratt, an engineer; dog unknown but interested. 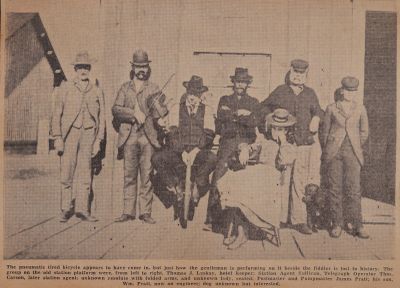