"AYR" got into trouble

PORT UNION was in old Alexander Muir's black list, right at the top.

Alexander the Great was not the author of the Maple Leaf but of the ancient firm of Muir Brothers ninety years ago, still operating a very busy drydock and shipyard at Port Dalhousie. He carried no insurance as a matter of high principle. He put his trust in Providence. In his old age he took a grim delight in listing his "losses," with the immediate causes prominently displayed. It was a silent but severe rebuke to Providence, saying without using the words: "I trusted you. Look how you treated me."

Providence could, if willing, have answered Alexander as unabashedly as Job was answered. In twenty years uninsured using of the Welland Canal Alexander's total "losses" through damage by the Muir fleet was $247. His other "losses" listed amounted to quite an impressive figure, for he outdid the Mosaic eye-for-eye and tooth-for-tooth. For example, if he lost a schooner after a lifetime of service and profit, he put down either what she cost to build originally or what it might cost to replace her, whichever was the larger figure. He never set off against this her total earnings, total profits, or total insurance premiums saved. Alexander the Great was a just man himself, and to him a loss was a loss, and he did not hesitate to tell Providence so.

Port Union, as remarked, was right at the top of Alexander's black list, with the unhappy schooner Ayr in the second line. The Ayr was the first vessel the Muir brothers built in the shipyard-drydock they commenced in 1850. Two years' work the brothers put into building the Ayr, and when she was launched in 1855 Alexander appointed his brother Bryce to the command of her, and expected great things of both.

And great things came. The Ayr initiated a great fleet of Muir vessels, all beginning with "A", and Bryce made the schooner pay her entire cost of building in a few years. But Alexander felt a holy joy in presenting Providence—-and Bryce—-with the debit side of the picture, in the biting entry, long years afterwards:

And so on. The poor Ayr, whoever her captain, appears to have pyramided her misfortunes in 1863, for in that year, in the column laconically inscribed "Neat Profits" opposite the Ayr's name is an accusing blank. She shows "neat profits" for all the other years, as do her brothers and sisters beginning with "A." But not the Ayr for 1863. The indictment is almost as damning as the final entry against the A. Muir, named after Alexander himself: "Given away for $8,000 after being rebuilt." The A. Muir cost $17,000 to build, earned that much or more in a busy lifetime, lay idle for years till she began to develop dry rot, and then was thoroughly repaired and sold for half her original cost at a time when schooners of her size and condition could be picked up for from $4,000 to $6,000 anywhere on the lakes. Providence please note.

All this would seem to have little to do with Port Union, but it is recalled by the assertion that the "port" was never popular with lake skippers, because of its poor anchorage and lack of shelter. The Ayr's $2,000 misfortune may have happened in a dozen different ways, but one can envision the inexorable Alexander sending Bryce there with her to load grain late in the fall at a fat price per bushel, and poor Bryce hanging on too long at the little wharf and being unable to get the sulky big bluff-bowed two-master away at all when a November sou-wester rolled in. The fact that he got her off the shore afterwards in the first weeks of December with damage which a $200 insurance policy premium might have completely covered is a credit to his seamanship, for at that time of year it was more than probable that she would be frozen among the ice hummocks on the beach and break up with them in the spring gales.

Port Union, fourteen miles east of Toronto, was no worse than Oshawa, twenty miles farther along, in the old days. Oshawa had only one stubby pier then, with no shelter, and there is where the Ayr again got into trouble, getting ashore while empty of cargo, perhaps because her anchors would not hold or the sea ran too high for her to beat out from the pier when she cast off. Oshawa has a fine harbor now and a bustling city behind it, while Port Union has not even a wharf, and remains at its modest peak of ninety years ago, half a dozen houses on three tiny streets, dominated by the railway watertank.

Port Union had not attained sufficient importance by 1851 to find a place in the directory of that year, or on Assistant Adjutant General De Rottenburg's large scale road map, but it would seem to have "arrived," even to the dignity of having a vessel built pn its beach. The oldest compilation of Lake Ontario vessels in Schooner Days' books, dated 1856, gives a schooner Caledonia of 95 tons as having been built at Port Union in the year 1851 and owned by "Hallowell and Heatherington," who would appear to be our wharfinger friend Helliwell, and possibly the "William Heatherston, hotelkeeper" listed in the directory of 1857 among the three "principal inhabitants" of the total population of thirty.

This schooner Caledonia may be the one whose ancient cables and anchors, forged in Montreal, were salvaged by the Hon. Gordon Conant, Attorney-General of Ontario, and given to aid in our war effort, just twelve months ago, the iron going to the Canada Metal Co. to make shells, and the scrap value paid for it by Charles Lewis of the Lewis Trading Co. becoming part of the first million contributed to the British War Victims' Fund. The anchors and cables and part of the wreck of the Caledonia were found off Bluff Point, below Oshawa, 20 miles east of Port Union. The identification of the wreck as the Caledonia's was conclusive, being made by the late Capt. Joseph Williams, and the living Mr. E. J. Guy, who well remembered the circumstances of the vessel going ashore there in 1880.

Neither knew where she had been built. There were two Caledonias on Lake Ontario, the other one having been built at Port Credit in 1842. She measured 144 tons. The lightness of the timbers of the wreck recovered at Oshawa—it was all carried to Mr. Conant's lawn at Buena Vista on a truck—suggests the smaller vessel of the two named, that is, the one built at Port Union. This may not have been the one and only, but it is the only one of which we have a record as being built at this port.

Only yesterday a big ledger found in the Copeland warehouse was brought in for Schooner Days' inspection. It was a cargo book of James Rowe and Co., shippers at Port Whitby and it had entries in 1853 and 1854 of shipments of culled staves, flour, beans, peas and butter, in the schooner Caledonia for Kingston and Montreal. The last was a long voyage for so small a vessel, but the flour paid a freight of 6 shillings and 3 pence a barrel, and she carried from 1,000 to 1,500 barrels at a trip. It is significant that the anchors salvaged from the wreck had Montreal marked on them. They may have been bought on this voyage.

The cargo book entries show that the Caledonia was sailed by Capt. L. Clarke in 1853, and by Capt. John Pirett for the Montreal voyage in 1854. She sailed in May and the flour's ultimate destination may have been the Crimean War front. Clarke loaded her with flour, Dec. 2nd, 1853, "superfine" from the Centre Mills for H. Daniels, and No. 4, from the Brooklyn Mills and D.S.W. Mills for Wm. Nicholls—noting carefully that some of the barrels were muddy when they came on board. Pirrett's cargo came from the Pickering Mills and was shipped by or for Wm. Laing.

Levi Annis, not the first of that honored name in Scarboro and father of Clare Annis, squadron leader now overseas, identifies the "unknowns" in last week's picture of the gay nineties at Port Union thus:

"And the dog would be Jimmy Pratt's dog."

It was a coincidence that the copy of The Telegram containing the picture of the Port Union oldtimers of 1890 also contained the picture of Clare Annis fighting the U-boats in 1942.

"Sir,—Re your article of Good Times in Port Union 3-street town, and the picture: Yes, the nineties were gay at Port Union. The unknown resolute with folded arms, is known, for he was my brother-in-law. And the name is Fred G. Hines, and to make it better, he also sailed, and came from a place that is not on the map, Cat Hollow. As you know and as do a lot of other people who read your articles, it is now Lakeport. He was the switchman at Port Union as you say, in the gay nineties.

"It was my pleasure to visit at the port only once in my lifetime, to travel by boat in the S.S. Argyle and to be met in Toronto by my sister, and to go by train to Port Union.

"There were a few more families in the Port at that time. Beside the Annises and Moons, how about the Medds, Yates, Portwins or Elderwins or vice versa? At that same time there was a young operator by the name of Godfrey, who is now Dr. W. H. Godfrey, on Oakwood avenue, Toronto.

"If you should not know who is the narrator of this article, I can be found in the picture taken of the sailors in Old St. Andrew's Church this year at Colborne, second from left back row. My sailing days started with Capt. Jas. Redfern. Capt. Charles was mate in Keewatin, which was built not much more than say 300 yards from my home in Lakeport. I am the youngest brother of the late Capt. Nelson McGlennon. Have not sailed for over 30 years.

"If this little episode is of any value to you, publish it. If not, scrap it. I will thank you for ail the nice things you have said about i Cat Hollow and all the captains, mates and seamen."

The AYR is the black vessel in the centre of the picture. The scene, not Port Union but Port Dalhousie, near Muir's dry dock, seventy years ago.

KEELSON AND FLOOR TIMBERS OF "CALEDONIA" on ON ATTORNEY GENERAL CONANT'S FRONT LAWN - Her anchor and chains have gone to make steel plate for 1942 corvettes. 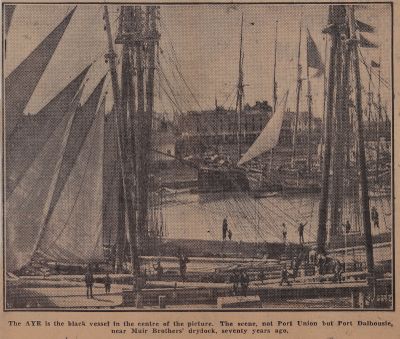