THERE died in Toronto this month a dear old lady of 90 who had seen the best of schooner days and much more in her time.

This was Mrs. McGiffen, widow of Commodore Johnny McGiffen, late of the Niagara steamer fleet. They were married in her home town of Oakville when she was a slip of a girl of 18 and he was an up-and-coming young captain in the great schooner trade. Oakville was sending Oakville-built sailing vessels as far as South Africa. Another old lady, still living, treasures a piece of ivory brought back by one of the crew of the Oakville-built Sea Gull from Cape Town. Oakville sailors were in demand all over the Great Lakes, in American vessels as well as in those flying the red ensign with its "patchwork quilt," escutcheon of the new Dominion of Canada.

Johnny McGiffen was an Oakville sailor, and mighty proud of winning the hand of Annie Balmer, and, soon afterwards, the command of the Jennie Mathews of Port Huron. His bride used to tease him with "hanging around that Mathews girl and painting her up like a Christmas tree," but that was all in fun. Neither of them had ever seen the little pigtailed lassie in the States after whom the big schooner was named, and Johnny had only one sweetheart and that was his Annie.

The Mathews and the Mary A. Lyon, named after another little pig-tailer, were as near "identical twins" as two schooners ever are. Launched in the same year at Port Huron, Mich., by George Hardison, a well-known American builder, in 1874, they were of exactly the same general dimensions, 138 feet on deck, 26 feet beam, 12 feet deep in the hold. Straight stemmed with a good sheer, broad-sterned with rounded transom and a clean run; three tall masts and a long jibboom and bowsprit and squaresail yard giving a big sail spread.

Either from the stretching of the surveyor's tape or the slip of the carpenter's axe at same point, there was a difference of one ton in their registered tonnage, the Mathews going 332 tons gross and 316 net; the Lyon 334 and 317, but they each drew exactly the same depth of water when loaded with 700 tons of coal or 23,000 bushels of wheat, which was considered the proper load for either of them.

The rivalry between them was intense from the day they were launched, and they were so well matched that the owners had no difficulty in keeping the skippers on their toes. When McGiffen got the Mathews he was told: "You make better time than the Lyon and the berth is yours."

This sounded all right, but the Old Man of the Lyon was taken aside and told: "Unless you make better time than the young Canuck from Oakville does, he'll be walking the Lyon's cabin-top instead of you, smoking ten-cent cigars."

This was in the days when they were changing from hemp to wire rigging. Hemp stretches more than wire, even if it is tarred. The longest piece of "standing rigging" in these lake schooners was the stay upon which the jibtopsail was set, unless we include the jumper stay outside it, which only carried such fancy kites as a jib-o'-jib or bluedevil. The jibtopsail stay was a peculiar piece of rigging, not running straight from jibboom end to topmast head, but girt in with a bridle, two-thirds of the way up. The purpose of this was to ease the strain on the foretopmast by making the stout foremast head take part of it, and also to tauten the long jibtopsail stay and keep it from sagging off to leeward with its sail.

This was a particular fault of hemp rigging, which stretches and stretches under stress. When the long jibtopsail stay stretched so slack that the bridle brought it in too close to the mast to set the sail properly, it had to be shortened. In the case of hemp this was done by a peculiar form of knotting known as "sheep-shanking," instead of cutting off one end. Sheep-shanking left the whole of the hemp available for splicing, in case the much-tried stay parted, for the sheep-shank could be undone; whereas if the stay parted after having the end cut off splicing might shorten it so much it would be useless.

The harder a vessel was driven the more her hempen rigging stretched. It became a byword of the lake marine, when something of brief duration was described, "no longer than the Mathews' last sheepshank," or "as short-lived as the sheepshank on the Lyon's jibtopsail stay." Because these two vessels carried sail so hard and so long in their eternal rivalry that their stretching jibtopsail stays had to be sheepshanked every trip, unless the weather was exceptionally light.

Mrs. McGiffen often told of the four-roomed "house" or deck cabin with portlights in the transom haying its floor awash from one end of the voyage to the other. Her husband drove the Jennie Mathews through, not over, whatever billows were bounding. And another of her stories was how she cradled her first-born—-now Lt.-Col. McGiffen—-in a coil of rope all the way from Chicago to Kingston, while the Jennie Mathews was roaring down the lakes laden scupper-deep with corn. The wee laddie was seasick and the rope coil made a cosy nest for him on the cabin floor. She had four good sons, two of them were soldiers in the Great War, and one was killed in battle.

In course of time Capt. Johnny McGiffen went into steam — and prospered. He commanded the ex-blockade runner Chicora and each of the new Niagara steamers in turn, and became commodore of the fleet.

Oakville soon knew the Jennie Mathews no more. She used to lay up there every winter. She and her sister ship were bought by the George Hall Coal Co. of Ogdensburg, and cut down to barge rig. For years they continued their racing up and down the lakes, but neither could gain nor lose now, for each was at one end of a towline longer than their laid-by jibtopsail stay and an impartial tug or barge was at the other. They remained sisters—or perhaps, in view of their differing names, cousins—all their lives. What became them in the end is not clear. According to one story they were both burned, in different harbors, on the same night. Which may be improbable and still true.

The JENNIE MATHEWS (right) berthed for the winter in the Sixteen Mile Creek at Oakville in 1874. 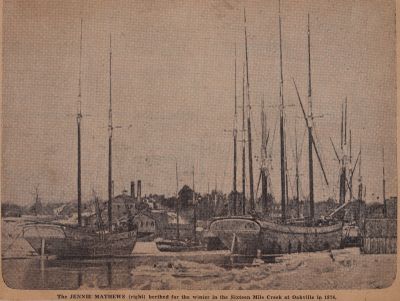