PORT UNION may never have had a successor or predecessor for the Caledonia, the little schooner built there in 1851, but the tiny town was the central if unregisterable port for a little fleet collectively known as the Highland Rangers. They were numerous small craft, built on this beach or in that creek-mouth, and plying a thrifty trade in farm produce, ashes, cordwood, stone, sand, gravel, and such other freight as could be picked up along the shores of the Highlands of Scarboro.

Hundreds of teams used to enter Toronto every morning with wood from Scarboro, selling as high as $7.50 a cord, because of its quality, even when wood was so plentiful as to be an encumbrance to the land. Coal competition had brought the price down to $4.50 in 1896, but not till after a million dollars' worth of wood had been cut from farmers' bushes in Scarboro and Pickering. The Highland Rangers carried a large share of the cut.

These Rangers dated from away back. The first of which we have a record—-although this may not be the earliest vessel built near Port Union-—was a handsome schooner called the Duke of York, built, by a Captain Hadley in 1820, at the mouth of the Rouge River, a mile or so east of the port. The Duke of York had beautiful lines, and Capt. Hadley used to better the times of the American schooners from Oswego—-the Duke of York, though small, traded far—-by from two to five hours a run.

Some of these Americans were smugglers, and built especially for speed. The Highland Rangers were not smugglers, but some others of the early Canadian schooners were.

The next vessel built in the Rouge, so far as is known, was the Wood Duck, a small schooner of 25 tons, owned and sailed by Moses Niblock of Port Credit forty years after her launching. She first kissed the waves in 1822. There have been three Wood Ducks on Lake Ontario. Schooner Days owned the last one in 1904. She was about the size of the Rouge River Wood Duck.

The steamer Canada of 250 tons, one of the earliest steamers on Lake Ontario, was also built in the Rouge mouth in the winter of 1825-26, and towed up to York to receive her engines. She went into commission in 1827.

Some time later Capt. Wm. Quick, staunch Loyalist who later settled at Brighton, came to Rosebank or the Rouge mouth and spent a season building the schooper later christened Charlotte of Pickering.

She was frozen in the river when the winter of 1837 set in, and some of the Patriots, terrified by the fiasco of Montgomery's Tavern and the rebel leader Mackenzie's flight to safety in the United States, conceived the idea of following him in the Charlotte. Details of what occurred are difficult to verify at this date. One story long current was that Capt. Quick engaged to get them out of the country, as Capt. Daniel Conant did with the Industry of Oshawa, which landed her rebels on the ice at Oswego and saved them from the fate of Lount and Matthews; only instead of sailing them to the United States and losing his vessel for his pains, as Capt. Conant did, Capt. Quick took them out into the lake and ran them into Toronto by night and turned them over to the alarmed militia.

Schooner Days has not been able to find any record of this. Capt. Quick had the reputation of being an honorable man and was highly esteemed for his enterprise in establishing a shipyard, wharf and warehouse at Brighton. It may be that the rebels overpowered him and seized him and his new schooner, in which case they would be open to charges of piracy, and that he turned the tables on them when they got out into the lake and could not tell where they were going, and steered into Toronto for his own safety and their discomfiture.

LAST OF THE ROUGE FLEET

The Northerner, a fine three-masted schooner of moderate burthen, 120 tons, valued at the high figure of $12,000 when owned by Gooderham, Howland and Co., Toronto, in 1856, had been built in the mouth of the Rouge before the new Grand Trunk Railway closed the entrance to all but rowboats, with its bridge. She must have been the last vessel built there.

Other Highland Rangers around Port Union were the Highland Chief, mentioned earlier, whose habitat was variously Port Credit, the Humber, Frenchman's Bay and Presque' Isle Point, and the Mary Ann, built in the mouth of the Highland Creek, a mile west of Port Union, before Port Union had a wharf or a name.

Both Highland Creek and the Rouge were navigable for sailing vessels of less than one hundred tons burthen, for perhaps a mile in from the lake until the bridges for the railway were built in 1855 and 1856. In his "Scarboro 1796-1896" the late David Boyle wrote: "Hardwood ashes and potash (from the forest clearings) were carried in schooners from the mouths of the Rouge River and Highland Creek, and return cargoes of salt, flour and furniture were brought in. . . . The hollows and ravines of the cliffs (Scarboro Bluffs) were hiding places of contraband goods. Large quantities of tea, leather goods (farmers' harness) and general merchandise were landed night after night at the mouth of Gates' Gully as recently as 1838. When opportunity served, the contraband goods were delivered in Toronto, Whitby and other places. A farmer delivering tea on one occasion narrowly escaped capture by hiding his two-bushel bagful in the manger where his horse was feeding."

Query: Did the horse or the tea-drinkers recover?

All along the Scarboro and Pickering shore, from Frenchman's Bay and Petticoat Creek — it was Poor Man's Creek on an American chart of Lake Ontario in 1836 — up to Nigger Gully and Billy Go-the-Road's gap in the Highlands of Scarboro, were unofficial landing places a hundred years ago. Then 'one-and-three"—a duty of 1s 3d per pound—on tea, a grinding government monopoly on salt, and other necessaries of the early settlers including tobacco prices double those in the States put a premium on the daring of traders who defied imposts, embargoes and non-intercourse acts much as the rum-runners of twenty years ago defied prohibition. The free-traders as they were known served consumers on both sides of the lake impartially—for cash—and had authority against them on both sides of the lake for their reward.

On August 30th, 1836, the American schooner Plough Boy (named to attract the farm customer) and the American sloop Martin Van Buren, named after a presidential big noise of a century ago, were sold by auction in Toronto, after being seized by the customs officers with cargoes made up of large quantities of Young Hyson tea, whisky and "segars." The Plough Boy had a long career afterwards under the British flag.

An old Lake Ontario captain and vessel owner who died thirty years ago told the writer that as a boy in one of the Toronto schooners he was more than once told to scull the vessel's yawlboat up out of sight under the planking of Yonge street wharf, and while doing so could hear the ponderous feet of the law above his head, solemnly parading down to search the schooner for contraband. The yawlboat would be loaded deep with boxes of smuggled tea, hurriedly consigned to the obscurity of the covered wharf. On one occasion a surprise visit resulted in the capture of seven large barrels of "spirits." They were rolled in triumph up to the customs house, and sold by public auction. The captain of the vessel denied all knowledge of them; he had no idea they were on board until the customs men found them under some lumber in the hold. The purchaser was disgusted to find that the "spirits" were aqua lacustrina; lakewater to you and me. Meantime the tea and silk and hardware hidden in the cabin had been distributed to worthy merchants whose douce emporia surrounded St. Lawrence Market.

On another occasion—this happened in Whitby or Oshawa—when a schooner was "libelled" by having a "monition" tacked on her foremast, which meant she could not leave the wharf without subjecting herself to dire penalties, a dozen casks were seized and rolled to the storehouse at the wharf head. The captain accompanied them solicitously, and stamped his foot in impatience while the customs men upended them and ranged them against the walls. Only certain casks excited his impatience; to the fate of many he was quite indifferent. The warehouse on the wharf was then padlocked.

When it was all over the schooner's mate reappeared with the yawlboat, which had been lying under the wharf deck out of the way. His sunburned fist was white with chalk. That night the yawlboat made another trip under the wharf, manned by the captain and mate, and the boy. It carried some empty kegs, one of which covered a lantern. The mate unmasked the light when it was safe to do so and pointed to a number of small crosses made with chalk on the underside of the wharf planking. The captain bored with a long auger until the rich aroma of that "hellish liquor" Jamaica rum was noticeable. Then he thrust up a pipe and filled one of the kegs. While this was being done he bored into another chalkmark, with similar results. The refilled kegs were plugged and sunk under the schooner. The mate had accurately chalk-marked his captain's impatient footfalls, and by thus boring through into the bottoms of the incriminating barrels overhead they literally drew off-the evidence. The remaining barrels were decoys, water-filled.

Next day the customs, smelling a rat or rum, put a guard on the vessel and on the warehouse; and the next day, finding that the evidence had all leaked away, except the smell, they told the captain to beat it, and threatened dire penalties if he ever told a living soul of his trick. He gave them a drink all round and departed, towing the kegs he had salvaged.

The same narrator saw the redoubtable "Fisty" Masterson, an old man-o-warsman who sailed a little schooner called the Christina out of Toronto, jump overboard with Mr. Carfrae, the customs officer, in his grasp, when the latter tried to chalk the broad-arrow on the Christina's deck, and so "arrest" the schooner for smuggling.

"Fisty," who was one-handed, rescued his victim, and explained that he thought he might fall overboard when he saw him stoop to make the fatal mark, and that he had sprung to save him, but not soon enough. In this case also the evidence disappeared during the diversion, and "Fisty" and the Christina were released. She got a rebuild at government expense through "Fisty" producing some bullet holes through her bulwarks. He got these "war wounds" in his vessel carrying troops or government stores to Niagara, against the Mackenzie rebels entrenched on Navy Island.

Even this is not the ruin of the single wharf which made the port, but the remnants of the cribs covering the intake-pipe for the railway watertank. A crib with sloping face used to protect the end from the ice. Port Union wharf was a few hundred feet west of these old timbers, which are still on the shore below the pumping plant, which has changed from steam to gas and gas to electricity with the changing years. 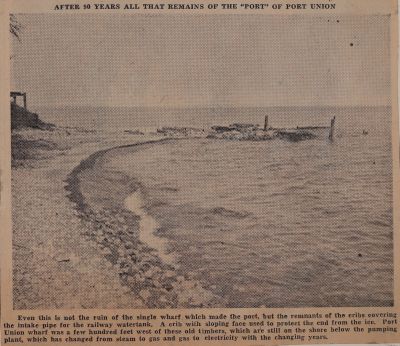