After Ninety Years Shining, Light's Out

—Not Major Mowatt's sturdy black ketch of the name, with the red-tanned sails, enrolled in the National Yacht Club, but the light which may have suggested the name.

The major is on active service and cannot be cross-examined, but the Scotch Bonnet has been beaming for ninety years. That goes back a long time before the ketch—-or the major-—or likely the major's grandfather—-was born.

The Bonnet's out. Unwatched, but shining alone for the last twenty-three seasons, official notice of June 26th, 1942, discontinued it "as of this date." The main traffic stream of the lake had long forsaken it, and the air force wouldn't relish getting bills for cracking its windows. It's in the new bombing practice areas. So its lantern will be boarded up and its 54-foot stone tower sandbagged.

Lighted a dozen years before the torch of Confederation, the poor old Scotch Bonnet had no official share in this mature Dominion of Canada's seventy-fifth anniversary last week.

Now, lightless, hornless, and alone, it is only a "fix" for flying men practicing bombing, a roost for the great - great - grandchildren of the gulls which hatched their offspring by the sun's warmth on a bare rock whose very name, Egg Island, has been forgotten for as many years as the Bonnet Light has beamed.

The Scotch Bonnet is an almost invisible reef at the east end of Lake Ontario where Prince Edward County thrusts its shoulder out against the pounding westerly seas. It has witnessed many shipwrecks, the Ida Walker's and Queen of the Lakes' and Belle Sheridan's above it at Weller's Bay, the International's and Jessie's and Henry Folger's at Wicked Point, below it. In its own vicinity the schooner Blanche was lost, with Capt. Johnny Henderson and all his Cat Hollow crew, in 1889. Hereabouts, long years before, the Ellen of Hamilton perished, drowning all hands and the two young uncles of Amos MacDonald of Woodrous, long warden of Prince Edward County. The two MacDonalds had sailed in her to superintend the sale of the fish she had loaded. Back of the reef, on Huyck's Point, the Sarah Ann Marsh, frapped in chains to hold her together, drove in in a December snowstorm. Her crew were cared for by the farmer's wife on nearby Nicholson's Island. Lieut. Nik Beketov, now in command in B.C., saw her bones on the beach within the last ten years, but they are now buried under hundreds of tons of shingle.

MAY BE NEEDED AGAIN

Forty years ago, when Ontario was in the grip of a coal famine and all sorts of obsolete vessels were in service in December trying to relieve it, the Scotch Bonnet light was very useful to schooners, steamers and the barges they towed, working up from Oswego and other American ports. While the light has been off the main line of normal traffic for many years, if navigation has to be kept open this coming winter to ensure a coal supply the ancient Bonnet, battered by ninety years of storm, might save ships and lives.

The Scotch Bonnet light was burning brightly in 1856, by the time the first railway trains were rolling along the north shore of Lake Ontario; it had been shining for eleven years when the new Dominion of Canada was born on the First of July, 1867, and it kept on shining—-passing from oil to vapor lights and supervised vapor to sun valve control — until the old Dominion of Canada, getting weary of it, blew it out on its 75th birthday, First of July, 1942.

WARFARE OF THE REEF

One might expect official records of the Scotch Bonnet to be as thrilling as a border ballad, with tales of wreck and rescue and the warfare of the lake. But they principally deal with pleas of keepers for repairs and a new boat and the right to cut enough wood to keep themselves from freezing to death.

The reef on which the lighthouse was built was quite uninhabitable, and the keeper had either to live like Ann, sister Ann, at top of the tower, on canned goods and hard tack, or use a house on Nicholson's Island, a mile away, rowing across night and morning to attend his light.

The first light-keeper known was John Giroux or Girow. Sam Wilson comes into the official record in the 1860's, because soon after the Scotch Bonnet was lighted, in 1856 a house was built for him on Nicholson's Island, near the mainland. The Scotch Bonnet reef itself, on which the light tower was built, was not large enough or high enough above water for a garden.

The reef was all rock, two acres in extent in low water, and awash in high. In low water it would be a good nesting ground for gulls. They like to hatch their eggs by the radiated heat of the sunbaked rocks. The reef is about two miles from the mainland, where Huyck's Point juts out and the shore gallops away east into Big Sandy Bay, and catches its breath to turn south again at Wellington. Across a short mile of shoal water lies Nicholson's Island so named from long ago, a handsome wooded island with room for a good farm on it. It always looked more like the top of a Scotch bonnet than the Bonnet itself. Our times have never seen more of the reef, once known as Egg Island, than the concrete work which replaced the original timber crib-work. Last time Kingarvie passed Nicholson's Island there was visible well inland a good brick farm house on the crown of the island, with the windows and doors missing.

LOOKED IN VAIN FOR COMFORT

The Public Works Department thought they were doing the right thing by the keeper when they gave him a house and 7 acres of cleared ground for a garden, on Nicholson's Island, with a boat to pull across to light and extinguish the light, but Wilson was not happy. He asked for a grant of 12 to 15 acres of woodland along the shore in 1862, to keep his family in fuel, and complained that the island was occupied by one Comfort Delong, who, far from being a comfort, was a pain in the neck, claiming possession of the plot where the government built the house, threatening him with "the law" when he went to cut wood, and so on.

Nicholson's Island turned out to be in the Indian Department and Public Works paid $381.60 to pacify Delong and the absent Indians, but Samuel continued to be as much troubled as was his namesake by Saul and the Witch of Endor, and quit in 1863.

THE PEACE OF PYE

His successor, Henry Van Dusen, penned similar appeals regarding the uncomfortable Comfort, and Wilson Bentley took over the light in 1868. He was succeeded by Robert Pye in 1878, an old man who had peace for twenty years by not living in the "government house" at all. The Indian Department had sold the whole island except four acres for a lighthouse reserve to T. H. Aman, and Mr. Aman made Pye comfortable in his own home or in the lighthouse itself and used the lightkeeper's house for his hired man. Public Works kept on worrying about ian adequate reserve, and appointed D. O. Spencer lightkeeper in 1898, succeeding Pye. Five years later, 1903, Cyrus R. Spencer succeeded to the "ivory tower" and held the fort till 1912, when B. Y. Cunningham was appointed. He was the last lightkeeper, for in 1919 the light became an "unwatched beacon," and Harold Spencer was employed on a day to day basis, when anything had to he done about it. The Spencers were long settled in Prince Edward County. Spencer Point is nearby.

BRIGHT LIGHTS OF THE '80

The light must have been a furious oilburner, for it is on record that it used eleven lamps in Robert Pye's time in 1888 and burned 77 wicks, and gallons of oil. Including the old man's salary of $440 this year's burst of illumination when the schooner trade in Prince Edward County barley was at its height, and passenger steamers were still running down the lake, cost almost as much as the "public relations" releases do in a day in wartime, 1942. It was a fixed white light in 1888 and was for 57 years. In 1909 it was changed to "vapor lights," acetylene gas, with oil used in emergencies which sometimes occurred. A hand foghorn, worked by the keeper when he considered it necessary, was part of the light equipment, and in the days of the schooners it was a grand assistance, by day and by night.

By 1919 schooners were becoming scarce on the lake, although we still had a few. They were not using the Prince Edward western shore, and the steamers had long forsaken it. The fog horn was discontinued, and the light was changed to a flasher, an occulting white light, visible one second and eclipsed three. Its new illuminant was acetylene compressed in acetone, operated by a sun valve, a copper tube which expands in sunlight and shuts off the gas. It contracts, when the sun goes down and turns the flow on again, the gas igniting from a pilot light.

The Scotch Bonnet became an "unwatched beacon." No keeper was needed, the, gas tank being filled in the spring and removed in December. 1

There were stories in the Scotch Bonnet's history which never reached the Public Works Department, and if you will you shall have a couple next week.

This is POINT PETER LIGHT, for ninety years the most southerly neighbor of the Scotch Bonnet. 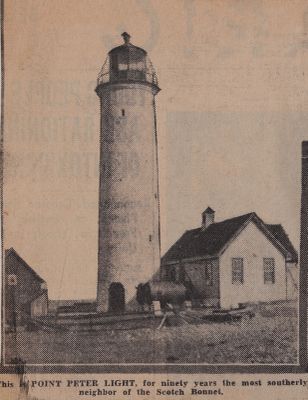