ABOUT the time the Bonnie Scotch Bonnet's lamp first gleamed across the waves seven wood-burning passenger steamers, the Maple Leaf, Arabian, New Era, Champion, Highlander, Mayflower, and Ocean Wave, plied between the head of Lake Ontario and Montreal, one leaving Hamilton every morning in the week, and calling at most of the way-ports. In addition the Northerner, New York and Bay State connected with the British Queen, British Empire and Jenny Lind at Ogdensburg, and gave a daily service from Toronto to Montreal, and there were the freight steamers Britannia, Comet, Dawn, Free Trader, Ottawa, Ontario, and Western Miller, each making a trip a week from Toronto and to the big town in Quebec. Two hundred schooners, large and small, spread their white wings above Lake Ontario's blue, and freighted all sorts of cargoes locally, or wafted Crimean War wheat and Upper Canada flour to the ocean and across it, for the New Brunswick had already gone over with the first grain cargo in 1847.

The Ocean Wave was burned with twenty-eight passengers in 1853, so she may never have seen the Bonnet's cheery gleam. It is not known when its oil lamp was first lighted, but the lighthouse was listed in the Public Works report of 1852-53. "In Lake Ontario a lighthouse is being built on the 'Scotch Bonnet' or 'Egg Island,' a small low island lying southeast of Presqu'isle and in the direct line of the Mail and other vessels running down the lake from Cobourg." The light was discontinued last month.

SHELTER LIGHT FOR SOME

THE SCOTCH BONNET flashed a welcome gleam to many an anxious mariner in the old days of sail, for that narrow mile of water between Nicholson's Island and the mainland offered shelter for schooners and even for steamers against westerly gales, if they had good ground tackle and were bold enough to wade through the welter of seas piling over the Bonnet light itself and back-surging from the western face of the island to leeward of it. Probably lightkeeper Pye's record of using up eleven lamps in one season was due to seas and gales breaking the lighthouse windows.

The Scotch Bonnet reef was too tiny, and Nicholson's was not big enough to make much of a lee, but combined they broke the sea somewhat, and the man or the ship nimble enough to round up sharply in the comparative smooth of the strait between island and mainland had a chance for life if his anchors held and the wind did not shift and come too hard from the north or the south.

Sometimes the old wooden arch-backed steamers carrying passengers, flour and package freight for Montreal, sheltered thus under Nicholson's. Between the Scotch Bonnet and Nicholson's Island there was a mile of water, but little depth and poor holding among the boulders and they never tried anchoring there. The Scotch Bonnet roadstead under Nicholson's Island was their only chance if they missed Presqu'isle and did not want to run on for South Bay. Schooners loading barley at exposed ports like Wellington on the Prince Edward shore would scurry for Nicholson's if the wind came in down the lake, and occasionally big fellows, the "canallers" that went all the way to Chicago to bring to Kingston the golden grain of the west, would try for shelter there, and find it.

OTHERS TRIED AND FAILED

One "marine protest," a document for insurance purposes, in the practiced hand of Samuel Merrill, "notary public for that part of the Province of Canada formerly constituting Upper Canada" penned on the 19th day of November, 1869, tells how the Kingston-built schooner George Thurston of 352 tons register—-left Port Dalhousie for Oswego with a fine west-north-west breeze on Nov. 15th, and 18,966 bushels of wheat under her hatches. Abreast of Oak Orchard the wind canted to the east, heading her off and coming on at gale strength, so that under close-reefed canvas the vessel filled several times up to her rail in the rising sea. Capt. Charles Staley, her master at this time, ran her for Toronto Point for shelter, the western sand-bar now close-packed with airplanes then making an excellent lee in an easterly gale.

At break of day on the morning of the 17th, when still thirty miles away from the expected shelter, and abreast of Whitby, the wind lulled and veered back to the south. With great difficulty the Thurston was got around and headed down the lake again for Oswego, butting a very heavy headsea, still from the east. The wind hauled to the southwest before noon and freshened, and a heavy confused sea came tumbling aboard from both sides, and over the bows.

"The vessel," deposed Capt. Staley and his mate, Robert Andrew Horne, "was under water, making very heavy weather and began to leak badly, shipping large quantities of water. The men had to get into the rigging to keep from being washed overboard."

They were abreast of Colborne, but so far to the southward that it was a long way to run for shelter in Presqu'isle, so they "kept her away for Nicholson's Island, steering east-north-east, with the vessel filled up and we were forced to knock her bulwarks out in part to free her of water. Made Nicholson's Island and found the sea very heavy behind it; got out both the anchors, with all the chains ready; rounded to as close as possible under the east end of it and found some shelter. Let go both anchors at once and gave her all the cables to the bitter end. She dragged them right away until the small anchor caught and parted the cable. The big anchor caught and brought her head to for the space of five minutes. Then she started her anchor again and drove straight ashore on the mainland of Prince Edward County, where she now lies."

"THE VESSEL WAS ALL UNDER WATER—THE MEN HAD TO GET INTO THE RIGGING TO KEEP FROM BEING WASHED OVERBOARD" —extract from an old marine protest. The GEORGE THURSTON was a contemporary of the fore-and-aft schooner shown thus taking a beating, but of different rig. 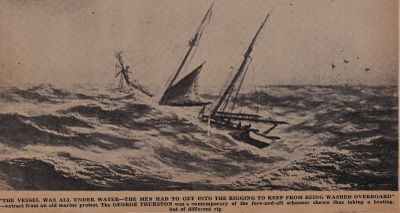