FROM Major Angus Mowat, old Sir Oliver's great-grandson, owner of the ketch "Scotch Bonnet," author of the best novel yet written about schooner days—-"Then I'll Look Up." He is again on active service in this war as he was in the last, though he keeps bees in peace time and is neither full of strange oaths nor bearded like the pard:

"Being now a soldier (of sorts) rather than a half sailorman, I don't get Notice to Mariners any more, So when I was bringing my 'Scotch Bonnet' down this spring I didn't know the old light was out, and kept looking for her through a driving rain until my eyes nearly started a bung. As you know, if you get in closer to the Northumberland County shore than you ought to do, the hump of the land masks Presqu'ile Light. So, not finding Scotch Bonnet light for a bearing I got too damn close to Proctor's Island and nearly ended up where better sailors than I have done in the past.

"I have a warm, though purely sentimental regard for that light. My first sail on the lake (aged about seven) was in the smack, "Where Next," owned by John Henry Young and sailed by Canon (then Rural Dean) F. W. Armstrong, of Trenton, and now of beloved memory. I think the mystery and romance of that bit of rock with the light and stone house on it will live as long as I do. And, of course, both were enhanced by the stories John Henry Young (who was captain of the lifeboat that used to live a couple of miles up the shore) used to tell us boys about all the wrecks and near-wrecks that had occurred thereabouts. I also spent a whole summer on Nicholson's Island (then Emmons, or Aman's to us), but was only three, and don't remember much about it.

"However, what I started to say was that on the famous first visit to the Bonnet, Cy Spencer was in charge. He had (this was his story) been blown off the top of the light a few days previously and had only saved himself by catching the rail and hauling himself back. He took off his shirt to show us "men" a tremendous black-and-blue patch on his side by way of proof. Odd thing. I have always believed that story, but now that I write it in cold type it sounds fishy as the Bonnet light rock itself smells.

Cy and Mrs. Cy lived in the house built in the rock against the light at that time. I remember thinking it was very comfortable, and Mrs. Cy's apple pie delicious. I lost it on the way home. Also, Cy, or his predecessor, had ferried out a lot of earth and had made a quite respectable little garden of flowers.

"In 1918, on my return from France, I again went out to the light with Canon Armstrong, but this time in a different kind of smack, a mere motorboat which blew foul gases at us who were sitting in the stern sheets. Cunningham, then the light keeper, also had his wife there. Oddly enough, my memory of that visit is as vague as the memory of the first one is clear. About all I remember is paying fifty cents to get my name woven into a coverlet that Mrs. C. was making for the Red Cross. That, and the stink of the motorboat.

"The last time I was there was in 1939, just before this war was declared. My wife and son and I were on our way up from Henderson Harbor in our "Scotch Bonnet" and lay off the light for several hours while the boy (who was going to be an ornithologist before he decided to be an infantryman) mucked about among several thousand rotten eggs and dead chicks. Mostly herring gull. But in the mess were the remains of about 40 cormorants' nests. That was something new for the ornithologists, and certainly something new for me, because I remember driving twenty miles in 1919 to see the first cormorant ever known to be shot in the Bay of Quinte."

FROM MAPLE SUGAR TIME
TILL CHRISTMAS ON ISLAND

Sir,—I was sure very much interested in your article Schooner Days about the Scotch Bonnet, as I have been there several times. In fact I lived on Nicholson's Island one summer from maple sugar time until Christmas. The names of the keepers of the light were familiar to me. The last named keeper, Mr. Ben Cunningham, I believe, is the only one living at present. He lives at Rose Hall, Wellington. I saw him last summer and, although over 70, he still can make boats that are hard to beat, as he had just finished building a racing dinghy that was a dandy.

I spent a week on the Scotch Bonnet in 1914. A pretty lonely place during a storm I can tell you, and was there quite a number of times since then. I know of only one son of Mr. Aman that lived on Nicholson's Island and he is living in the U.S.

WAS THIS THE GEORGE THURSTON'S?

On the northeast corner of the island there is a long chain and anchor that some boat left there or was wrecked there, or something, as no one seems to know down that way. It sure would make a few shells or guns. The last time I was at the Bonnet it was practically covered with gulls, snipe and other birds and hundreds of eggs, and the government house on the island was housing sheep both upstairs and down and I climbed to the top of the light to see from it once more. I might say that Mr. Cunningham used to take over dirt to grow a few vegetables and flowers for his own use, each spring, when he kept the light.

Well, I could go on about that part of the country, but am better at reading about it in Schooner Days, which I enjoy very much.

Wishing you and your column every success, I am,

THIS is intended to represent the Scotch Bonnet's elder neighbor, the Gull, built on the Gull Rock, at the end of Gull reef, which extends from the land between Port Hope and Cobourg. It is called Peter Rock on some charts, which creates needless confusion with Point Peter - now the second lighthouse east, on the southwest corner of Prince Edward County. The Gull Light, with its cresset or brazier beacon may have looked like this when W.H. Bartlett made the drawing in 1840. The wood-burning side wheeler is true to time and type, but the three-masted barque in the background never sailed on any lake or sea. She could not, with such a rig as depicted, showing no sails but topgallantsail, topsail and jib. The decorations at the head of her mainmast suggest the broad pendant and commission pendant of Commander Yeo in his great flagship St. Lawrence, which Bartlett may have seen in pictures or at Kingston on his visit to Upper Canada. She was then dismantled. The boat in the foreground is a crudely drawn lugger. 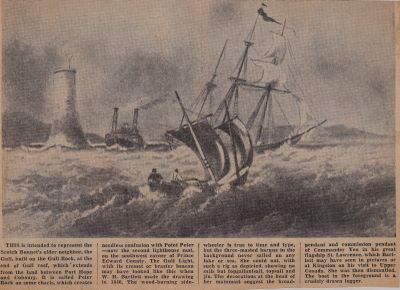