THE SCHOONER or lake "barque," George Thurston, named after her builder, was a white, straight-stemmed, rather small canaller of the old type, built in Kingston in 1857. She went to England with a cargo of timber and lumber in her second year under Capt. Ben Tripp. She was "square-rigged forward," rigged with a squaresail, topsail and raffees, a typical lake "barque." She had many adventures after her return to Lake Ontario, including getting hard and fast aground on one of the cribs marking the old steamer wharf outside Port Credit. Capt. Frank Jackman had a hard time towing her off. Her dragging ashore in 1869, when she tried to shelter under Nicholson's Island, guided thither by the now darkened Scotch Bonnet light, was described last week.

Capt. John Williams sailed in her once to Lake Erie.

She had got aground again opposite the Garrison, as it was called, west of the old Queen's Wharf in Toronto. The captain tried to budge her by letting another schooner sail across the bight of his cable, which he had laid out a long way ahead, but this did not work. The cable held, as did the Thurston, and the attacking schooner slid off to leeward. The Rover and the Jenny Jones, little hookers, finally lightered the Thurston off by removing her cargo, and young Johnny Williams, then with his brothers in the Rover, shipped in her when she went to Port Dalhousie to drydock, and afterwards to Erie, Pa., for coal. She was frozen up in the Welland Canal, returning.

The veteran Capt. Williams in his 86th year, recalls her square foretopsail, and the mate, Old Phil, being anxious about getting it reefed before it capsized her—-and the captain, Joseph Jackson, Sr., coolly telling him, "Sit down to your dinner, Phil, and when you've worried that, we'll worry about the topsail." When Phil had finished, all hands were called, the topsail was lowered for reefing and Phil was first to the weather earing. Little Johnny was kept at the wheel - too heavy a job for a boy, but the captain stood by him and turned away to laugh when his steering got the topsail aback and almost shook the mate out of the foot-ropes.

Old Phil didn't laugh. He set Johnny to scrubbing the paintwork of the clean, white cabin, where the mate, a two-quid man, had missed the sawdust box.

Capt. Jackson came along and pried Johnny's jaws open as he scrubbed.

"Don't," said the master, adding in a loud roar: "In the Thurston, them that chews cleans up their own messes—-pronto."

But both old Phil and old Joe were good to the lad. They were good times, those, in Schooner Days.

ANOTHER old-timer which sought in vain for shelter under the Scotch Bonnet was the Thomas C. Street, the night she was lost in the Great Gale of 1880. She left Toronto on Nov. 6th, loaded so deep with wheat she had had to wait for the rising of the water in the old Western Gap to get out. She had 21,000 bushels for Kingston. Capt. Spencer J. B. Phipps, of Port Dover, made affidavit before Edward Merrill in Picton, succeeding Samuel as notary public, on Nov. 8th, 1880, the day after the wreck of the Street.

"Proceeded on down the lake under double-reefed canvas, the gale increasing all the time, and a tremendous sea got up. Vessel laboring very heavily, had to take off all canvas except close-reefed (square) foretopsail. Two jibs and square-sail were blown away. Made the Scotch Bonnet light about 2 o'clock in the morning of Sunday, 7th inst. At this time sea so heavy and vessel laboring so much, and steering so badly I dare not haul her up to go round Point Peter (and so on down to Kingston), but kept her away to try and get under Nicholson's Island. Before we saw the Scotch Bonnet Light we had broken the bulwarks away to relieve the deck of water. It was full up to the hatches most of the time.

"We jibed over to go for Nicholson's Island, but finding it brought the sea too much on her port quarter for the safety of the vessel, which was in danger of foundering, we kept dead before the sea until we struck bottom about three miles west of Wellington, the seas breaking over the vessel and the vessel pounding considerable for two hours.

"At daylight we got a line ashore (by bracing up the foreyard and swinging a hand-lead or a fender-—accounts vary—-from it, the vessel being within fifty feet of the beach). All hands then got off at 6 a.m., it being impossible to remain on deck on account of the sea breaking over her. She was pounding very heavily, and twisting aft, and had hogged, beginning to break up."

The Street lasted for years, however, as a wreck on the beach at Wellington. Like the Thurston, she too had crossed the Atlantic and more than once. She was a very fine vessel.

Commercial traffic has forsaken that part of the lake where it used to be so heavy eighty years ago. The schooners have all gone into the columns of Schooner Days. The steamers which used to skirt the north shore, breaking off at Cobourg, and circumnavigating the "island county" by the lights of the Scotch Bonnet, Salmon Point, Point Peter, and the Little Red Onion at South Bay, and the Ducks, False and Main, now don't run at all. Their successors follow a course down the middle of the lake, with one stop at most, and that on the south shore at Rochester.

Except as a 90-year-old relic the Bonnet may have no value, even as an air beacon. But we are sorry to see the order for its discontinuance. It leaves dark and lightless without foghorn and without lifeboat the whole west side of Prince Edward which has seen more commerce and more shipwrecks in its time than any other piece of lake shore of its length.

That used to be the regular route when they garnered the mail from lakeshore post offices between Hamilton and Kingston.

LOOKING NORTH UP THE STONY BEACH AT WELLINGTON—The THOMAS C. STREET drove in just below the distant Point. Nicholson's Island and the Scotch Bonnet are beyond it. 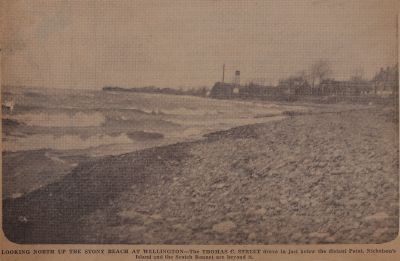 Steamboats (from bills of lading)
Groups of Related Records