As told by Ivan Annis of Highland Creek

YOU think the mosquitoes are bad to-night? Well, you work here for a long spell, stirring things up, and see what they're like. We got bitten up, I can tell you.

My grandfather, Andrew Annis, and my father, L. G. Annis, used to tell and re-tell stories about buried treasure in the Highland Creek ravine. I heard the same story from other old timers of the Highland Creek and Port Union district.

The stories varied, but were more or less the same—that a French vessel had chased a British ship up Highland Creek, a navigable stream at that time, and that the British ship heaved the treasure overboard, intending to come back and get it some time. It was supposed to be gold and silver coins, I don't know how much, but a lot of money anyway.

I don't even know the time this all took place, but it was when the French and British were scrapping along the north shore of Lake Ontario.

I always had it in the back of my head that I'd have a try for that treasure, and then I met up with a chap named Ross Terryberry, who had special divining rods to locate gold. He was a kind of wanderer, and had been all over the place, and had an album of clippings of treasure stories and treasure hunts.

He was driving a truck on the Kingston road and we ran into each other at Highland Creek, and—well, we decided to put my knowledge and his divining rods together and see what we could find. That was the summer of 1936.

Some other friends of mine got in on it, too, and we set out with those divining rods—four pieces of metal about the size of slate pencils. They weren't gold, but had gold in them, and it took two of us to operate them. Each man held two of the rods lightly, and when the ends of the two pairs of rods were allowed to touch, they would turn in the direction of any gold.

We had a preliminary canter after some treasure buried up Yonge street back of Thornhill. The gear worked, only the treasure must have been scattered by farmers ploughing the land, for it was all over the fields in single coins, and to do $5 worth of digging to find a $5 gold piece wasn't getting us anywhere fast. In all we dug up about $100.

I'd always thought the treasure of the Highland Creek ravine was buried at a spot called Golden Point—it got its name from the old legend, and is about a quarter of a mile north and well east from where the divining rods eventually located the treasure. Those rods weren't the least bit interested in Golden Point. They just directed us right across the creek on the other side, towards Toronto, and pointed to one spot no matter where we went with them. They never changed their minds, and we decided the gold must have been put overboard just where they indicated. The rods didn't move a speck right on Golden Point.

HE HAD THE GIFT

I'll tell you what I've never told anybody before. We went to see a man in Hamilton who was gifted with second sight. He told us that the gold was in kegs, about half as big again as a nail keg, and he said there were five of them, for sure, and he thought he could see one or two more. He said he could tell they were filled with mostly gold coins, and some silver coins, "But you won't get them," he warned us. "You'll get close, but you won't get them. And be careful, or you'll lose your lives. There'll be a cave-in, and I see danger."

COULD BE OLD ANCHORAGE

The treasure spot is at the northwest side of the Highland Creek ravine, on a privately-owned farm, and it's in the marsh. That summer it was comparatively dry, but now it's more like a lagoon, with the water ten feet deep. It's about half a mile from the mouth of Highland Creek, and a hundred yards or so to the city side of the present stream.

We got a pump and cribbing, and we set to work. We dug a hole 34 feet deep, and were feeling pretty excited, because the soil we brought up was a different kind, when the whole thing caved in. I was lucky to get out alive, and so was Earl Pooler of Highland Creek who was working there with me at the time.

The Hamilton man was right. There was a cave-in, despite all our precautions. And I guess I'm lucky to be alive. But we had a lot of fun that summer—worked on and off, sometimes a few hours at a time, sometimes all day, and sometimes all night.

Well, we were short of money and time, and had to give up. I don't know whether I'll ever have another chance at the treasure or not. I hope I will, but right now I'm working at the Ajax Plant at Pickering, as a driver. If I ever get a thousand or fifteeen hundred dollars that I can spare, I'll have another try for that gold—and I'll be happy if I only get part of the money back.

I've heard some of the old-timers say that a ship was sunk in the Highland Creek ravine just south of where we were digging, and that they used to play on the wreckage. There's no sign of it now, of course. It wasn't the same ship that dumped the gold, according to the stories, though—the gold ship got away.

Ivan Annis' grandfather was born where Crestwood Golf Club has its course. His great-grandfather came from the New England States, he said, just prior to most of the United Empire Loyalists. 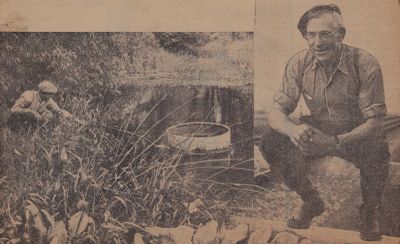